Hush taunts, Harper vaunts, and Bard plays commandant in this twenty-fifth chapter of DC Comics' weekly Batman affair. With Alfred hospitalized and the city in chaos, our Caped Crusader makes a bold move, but his emotional state causes him to slip up. Meanwhile, Julia discovers how frustrating playing Bruce's operator is, Tim and Jason come this close to bonding, and Babs is confused as to why her father hasn't been cleared yet. The Bat-Family is gathering in Gotham, but is Hush too many steps ahead by now?

I'm not sure I'm fond of R.M. Guera's art, to be honest. It really depends on who or what Guera's drawing, though. Everybody has these odd expressions, their chins are distended, and I don't think he quite understands how shadows work at times. The only person who looks halfway decent is Jimbo in the few panels he's in. This is very disappointing since there's some really great layouts, especially in the final page with the family coming to Batman's rescue, that would have worked really well in the hands of a more competent renderer. But we're stuck with Guera for the next issue as well, so you might as well adjust your expectations. 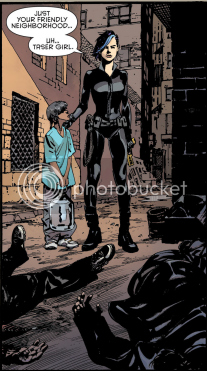 He draws a decent Harper, at least.

Batman finally catches on that Jason Bard is involved with Hush when he sees that the new Commissioner saw to the Architect's release from Blackgate personally. Actually, it was pretty sloppy, considering, but maybe the point was to get Batman to go after him to trip the trap Hush had waiting for him. I only hope that Batman was smart enough to have several copies of the evidence Batgirl, Red Hood, and Batwoman gathered in Brazil that clear Jim's name (probably should have sent that evidence to trusted news sources, like maybe Clark Kent... I know he lives in Metropolis, but it would still be a major story for the Daily Planet if Gotham City's former Commissioner of Police was being set up). Obviously Tommy Elliott still has a hate boner for Bruce because he was "fortunate" enough to be a natural orphan, rather than a self-made one. It's kind of a dumb thing to hold a grudge over, but Hush is crazy.

Ah, but Tommy, "The worst form of inequality is to try to make unequal things equal."

Whatever Tim and Harper were doing in Japan must've been as effective as whatever Stephanie Brown was doing while hiding out in the public library. Harper's already getting used to taking down thugs, though her preference for the taser weapon makes Tim uncomfortable (Batwashing was strong). Because Harper trained with Tim and not the man himself, she'll probably be a little less regimented, and she's a snarky one, which I like. The interaction between her and Tim is probably the most interesting he's been in the New 52, the poor bastard. I can hardly wait to see her in the Bluebird get up.

This is my new fetish.

Speaking of interesting interactions, how many times have we actually seen Tim and Jason actually converse with each other, alone, in this new continuity? You can almost feel a sense that these characters have a shared history and connection, even though because of the shortened timeline, the position of Robin is more like a summer internship and the Robins don't even seem that close with each other. Teasing each other over girls, worrying over the family's problems, mentioning the events of Death of the Family, it's almost as if there's some actual bedrock of continuity and cohesion here. It doesn't have all the working parts it needs to, but it's more than just scraps, at least.

That's how I felt after that "Son of Batman" movie.

I hope somebody punches the shit out of Bard. But who do I want to do that? Batman, certainly. Barbara or Jim even more, though. But Hush will probably kill him after he's outlived his usefulness. After throwing the city into a panic, I can't imagine Bard will be of any further use to Hush. Maybe Bard has plans of his own, though.

Next issue: History of Hush!

This is almost epic.