Why does Cass look completely out of her element here? She's a ninja girl! Throwing stars are like snowflakes to her!

While Dick's away, Tim and Jason play, there's a deadly ballet, and there's a bit of LesYay, all in this tip-toeing issue that'll make you plié. It's the seventh issue of the globe-trotting second Batman weekly trek from DC Comics. The Prague Batcave is full of bones, the dive bar Tim and Jason visit is full of scumbags, and the Prague Ballet is full of secret asassins (and at least one Mother). I'm shipping Harper/Cass now, but let's get to that later, there's a story to follow!

How do they get access to this place? Why, a SKELETON KEY! Ahahahahaha... I'll see myself out.

We start off with the flashback to Batman and Robin's continuing pursuit of Scarecrow, now taken to Prague. There's an easy takedown of one of his throwaway flunkies, who's pretty worthless as a source of information. Batman shrugs it off and takes Robin to a secondary Batcave he's already set up nearby. Later on, while in town, as Bruce Wayne he pumps one of his rich peers for information about Mother. Let's hope for this guy's sake he doesn't end up pasted against the floor like Dossey guy. I wonder if Mother's clients and the Court of Owls people have some overlap, by the way.

You really don't see much of Jason Todd and Timothy Drake together in the new continuity, except when the whole entire Batfamily comes together. They definitely have contrasting philosophies, methods, and personalities. Jason, for his part, was basically The Punisher, but despite his deadly approach, he's been mellowing enough over time to fit in with the rest of the group. And Tim is a bland, lifeless, generically super-smart paper cut out that used to be really awesome in the old continuity but now and then shows shades of his old self in this one. By putting them together, I feel like they both benefit, and the reader benefits. Maybe they'll end up bonding over their mutual irritation for Dick.

Aww, I hate to be one of "those" people who see two people of the same sex/gender growing close and holding hands and just assumes they'll be coupling, but awww... Harper and Cassie! I never thought of Harp as being into girls, having previously professed some interest in Tim, but these scenes with Harper in a tux, and having this powerful shared experience at the ballet stirs something in me that makes me want to fire up the Tumblr and "ship it". It could just be my base heterosexual male desire for girl-on-girl romance, but I don't know, it could also be my desire to see Stephanie Brown fans in dispair. (Harper could just be bi.)

We're all onto you, honey.

By the way, how great is the art in this issue? So great. Aside from a couple of awkward panels (and I'll chalk it up to stylistic choice), the scenery, facial expressions and general character art, that splash page of the ballet in progress, the page where Dick walks among the painted backdrops, amazing work by the pencilist, inker, and colorist. Just a really well put together issue, artwise.

The story's been building up still, and while it's been a good ride, I need a little more to go on to stay compelled. Bring on Mother! 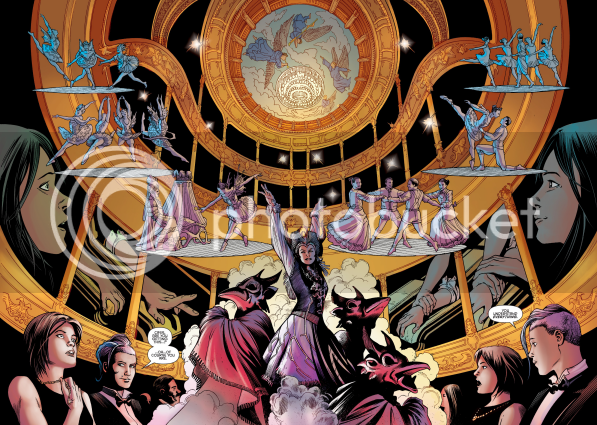 Why does it take a Batman comic to make ballet seem interesting?