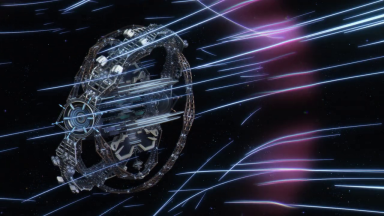 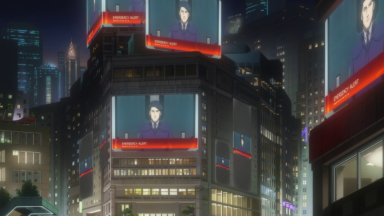 Synopsis:  The last obstacle between Heinessen and the Yang Fleet are the twelve defense satellites that circle the planet, Artemis' Necklace. First, Yang has Bagdash announce that the coup on the FPA government was orchestrated by Reinhard von Lohengramm. This astonishes and angers the National Salvation Council, but Real Admiral Lynch admits it's true. At this point, Yang destroys the satellites with propelled masses of ice that shatter them. Lynch kills Admiral Greenhill and is, in turn, killed by Greenhill's subordinate. The coup is over. Frederica mourns the loss of her father. Order is restored to Heinessen and Job Trunicht reemerges, in care of the Earth cultists. On Phezzan, Adrian Rubinsky assigns Boris Konev to spy on Yang Wenli. 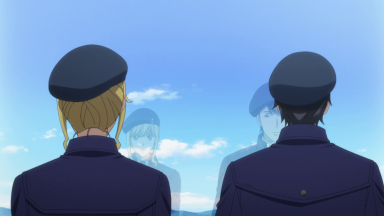 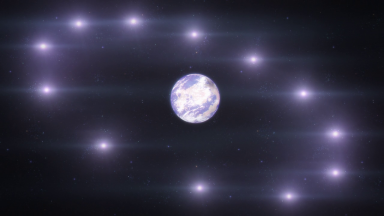 The Free Planets Alliance coup is overturned in this dramatic episode that sees the death of two named characters, the return of another, and the scheming of yet another. Even as things wind down for the season, at least the FPA side of things, the stage is set for the next act right away. All the more to the credit of Yoshiki Tanaka's writing from the novels.

Speaking of Tanaka, this episode is an accurate adaptation of the seventh chapter of the second book of the series. It does shuffle around one thing, the Boris Konev material, which happened at the beginning of the chapter, rather than the end of this episode. When you think about it, that makes a lot of sense, since the FPA coup material is over and this new plot point sets up future things, so the episode gets the former out of the way first. I was disappointed it left out Yang's lamenting that the first power to ever attack planet Heinessen wasn't the Galactic Empire, but himself, but I could see they were pressed for time. I was glad they instead gave us a much needed scene of Frederica crying over the loss of her father, away from others, to show that she's professional, but still human. This really helps give us some of the warmth that is occasionally lacking in this adaptation.

I love the inventive way Yang takes out the Artemis' Necklace satellites and how it ties into the backstory of Arle Heinessen, who the capital of the FPA is named after. Using enormous masses of ice carved out of a nearby planet and ramming them at high speed at them is pretty ingenious. Normally anyone wouldn't have the time to do something so precise, but since Yang already defeated the coup's fleet, he had the luxury of doing just so while the coup faction felt safe from behind their curtain. It goes to show that you can't over-rely on technological marvels to make the difference between winning and losing. You need to be flexible and crafty, not to mention have numbers.

Another great Yang moment, and probably my favorite scene of the episode, is his dressing down of the remaining coup spokesman. He points out that the National Salvation Council was no better than the Galactic Empire's autocracy, and certainly not better than the Trunicht-led government, either. This is because they outlawed free speech. "Corruption in government is not politicians accepting bribes. That is corruption of the individual. Being unable to speak out against such acts is true corruption." This action made them no better than Emperor Rudolf. While it's true that the previous government had its corruptions, and was certainly more concerned with elections than with peace and prosperity, you were at least allowed to criticize it. Of course, with Trunicht now back, Yang may regret not taking that offer of Schönkopf's from a few episodes earlier, at least a little.

Even though the show can get a bit over-talky at times, and I doubt real life military personnel would be giving these sorts of articulate exchanges about philosophies, it's still a treat to hear them and imagine there are those within humanity that have principles and the ability to discuss them so. The show has sort of a hyper-realism where it has natural extensions of those beliefs into full expression, and thus can give the impression of too much exposition, but it fits the reality of the show like a glove.

Next up, a nice cool glass of poison! 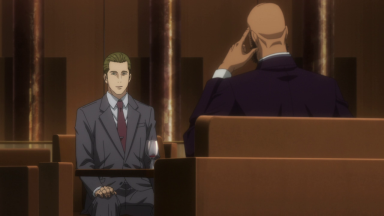