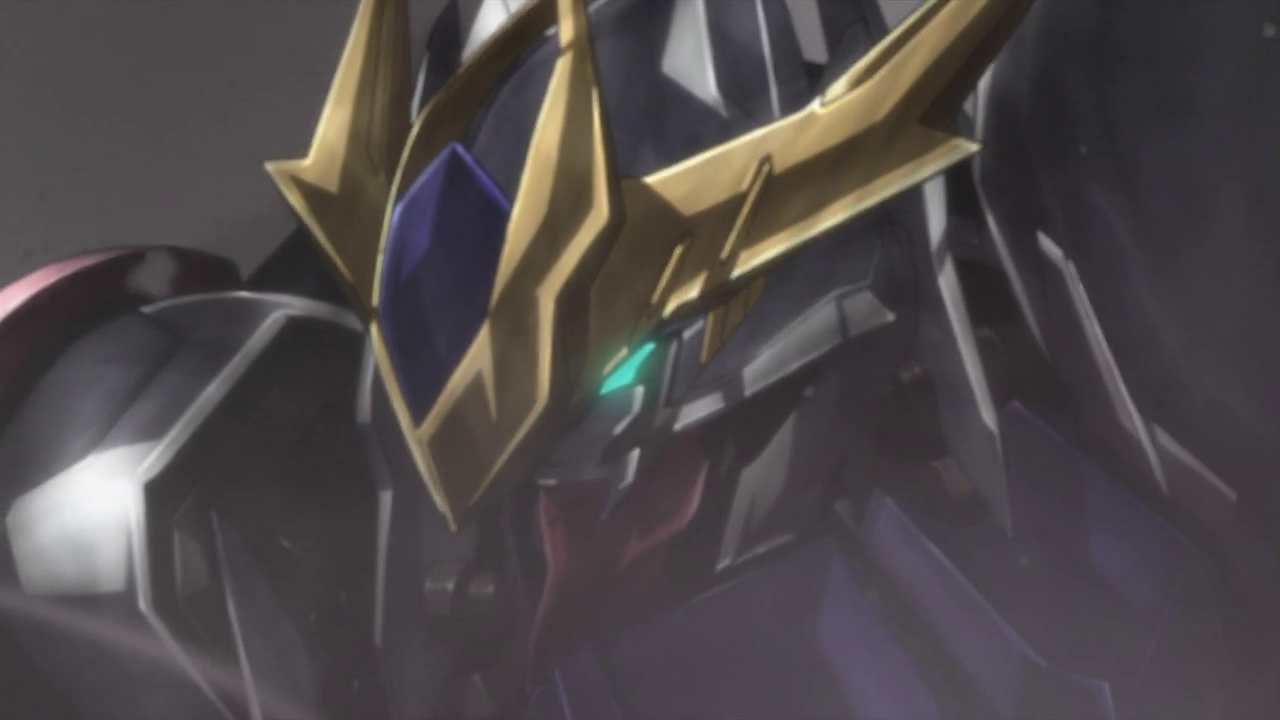 Wow. It’s been a year hasn’t it? These upstart rapscallions, once on the verge of utter defeat, now are the biggest names in both the regular and black market. Unlike the last serial Gundam series that had two seasons (Gundam 00), Iron-Blooded Orphans kicks off without any big down note where our heroes are in a lesser position of power than before. After the well-deserved victory they scored last season, they need this moment to shine, and shine they did.

I anticipated a few weeks ago privately that the premiere will be somewhat of a retread of the first episode except Tekkadan is running the show. Sure enough, this is the case. It is not a bad thing, since the time and emotional investment you may have given is not wasted. Set in about I wager six months to a year after the finale, Tekkadan is not just the military adviser to an Arbrau headed by Makanai, but a full-fledged member of the Teiwaz Group. Meanwhile, Kudelia has learned to multitask and founded another enterprise in half metals with the aptly named: Admoss Company. Like the first episode, this one focuses on just establishing their world amidst the backdrop of the bigger one. The series where its first season gives us war as seen from the underclass becomes a series where its second season may give us war… as seen from the upstart lower-middle class. It is refreshing to also see how their actions also brought about unintended consequences. Upstart bunch of kids beating hoity-toity Gjallarhorn now incentivizes upstart groups of people to start utilizing them, Human Debris, and even mobile suits in their quest for either independence from Gjallarhorn or for more power.

What this episode also does a good job at is introducing us to a new set of characters and integrating them amongst the older ones. The older ones you need not worry about, since they’re still a gregarious bunch, and are self-aware in making sure they do not become their former employers (right down to not installing the Alaya-Vijyana system on them), or if they’re Maccy still very committed with their political machinations. The new ones I’m looking forward to. With Tekkadan, we’ve a set of new grunts that have seen no combat never mind any of the suffering the main group faced last season, so their frame of reference will make for interesting interactions with the older guard, or if they’re destined for death, a firm reminder of the cost of their business. With Gjallarhorn, since Maccy moved up in the ranks, we see a new set of foils for him with the remaining heads of the Seven Stars. The man still has his plans in the making, and of course there is a veritable tension amongst the group on his mere presence. This is fine, since it allows for potential good challenges to him with people quite versed in realpolitik. We are then introduced to another soldier of Gjallarhorn and subordinate, Julieta, an eccentric type, and in what is going to be the opening credits another masked man (bets are on Galli-Galli). Like the new Tekkadan cast, looking forward for how they fare in the upcoming series.

Other than that, it’s a fairly solid affair. There is not much to this episode aside from retreading a bit of old ground except our heroes are in a better position. In some sense this is fine, yet once again like in the first episode Mika arrives at the tail end of the episode and we’re left hanging on him utilizing the upgraded Barbatos until the next episode. There is also the lingering fact that we’ve no clear cut MO for our heroes. In the first one it is to get Kudelia to Earth while finding a place for them. However, now that they’ve the power, they are preoccupied in maintaining it. As Orga tells Kudelia (in a nice twist where he’s the one she’s interacting with in this premiere rather than Mika in the first), there aren’t ones for ideals, but moreso towards building something for themselves.

How that will change in this brave new world we’ve yet to realize, but suffice to say, you’re still on my good side, Tekkadan. Let’s see how this unfolds together.