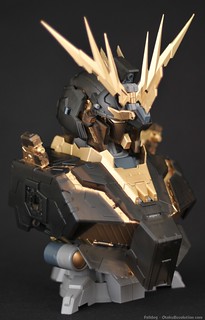 I wanted to take some time to review my first non-Bandai Gunpla release, the 1/35 scale Banshee Bust from Seraph Hobby. I’ve got a few option pieces here and there but never a full blown kit so it has been a pretty interesting experience. I picked this up via the always great decal resource, Samuel Decal. If you follow the link you'll see Seraph Hobby's press photos for the kit.

Perhaps I should start by saying that I in no way condone Bandai knockoffs. If you have the choice between a Bandai made kit, and a reprint from TT Hongli, go Bandai every time. Every review I’ve ever seen has easily placed the Bandai product as the superior release. Sure, Bandai's releases generally cost more but it's worth it. Plus you should really support the folks who took the time to develop, design, and manufacture the original product. However, when you start talking about kits that Bandai doesn’t make, it's a massive gray area. Awhile back I started getting these PG sized action bases which are just reprints of the one included with the PG 00 Gundam plus some extra pieces to support every PG kit. The one included with my 00 broke, so what to do, wait years to get a replacement? Buy another PG just for a base? Or get a clear one which Bandai doesn't even offer.

Unfortunately this moral gray area just gets more murky. Take the upcoming release of a 1/60 scale Tactical Arms, an enlarged pressing of the runners included with MG Red and Frame Blue Astray kits. It's no longer just a differently coloured pressing, but a whole different scale.

This leads me into the subject of this review, the Seraph Hobby 1/35 scale Banshee Gundam Bust. Sure, it's based on Sunrise/Bandai's intellectual property, but it's something Bandai would never offer. Especially with some of the options available. So I feel bad because I'm, for lack of a better analogy, pirating from Bandai a bit. And, while I'm glad Seraph Hobby made this kit, I wish Bandai had. 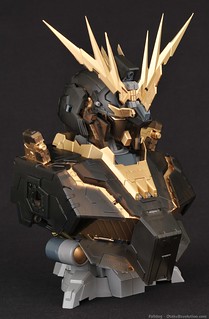 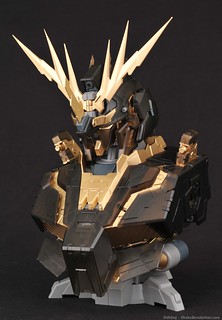 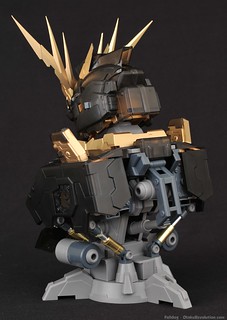 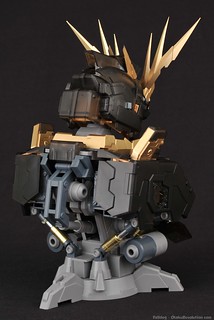 The Banshee bust is big, over 10 inches tall and nearly 7 inches wide. The box itself is huge as well, nearly twice the size of a MG Banshee box. Why? Because Seraph was awesome enough to provide several additional sets of runners. For all the psycho frame details, and other bits that ought to be gold, there are two runner pressings; gold painted and clear. This will allow you to put it together right out of the box without having to worry about painting the gold details. Or, if you like, you can take the clear parts and paint them clear yellow, gold, red, whatever your heart desires. There's also two pressings for all the armor pieces, straight black and a dark smokey clear. Don't let the press photos misguide you, there's no purple plastic here. The smokey clear looks downright fabulous even if its clear nature gives cause for concern when it comes to white plastic stress marks (If it's getting painted, no big deal. If not then you have to be super careful). 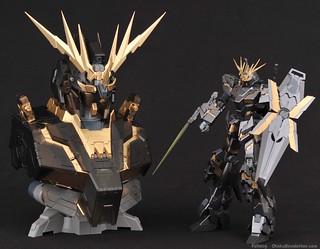 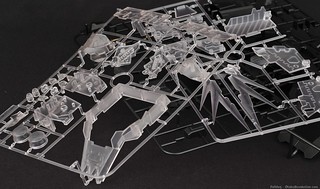 For gimmicks the Banshee Bust comes with some metal pieces that make up four pistons, metal bits for the head mounted vulcan guns, and some sort of tube designed to look like power conduit. There's also a two LED cable set which can be used to light up the eyes and the forehead censor. I haven't wired it up, partly because there's no indication in the manual as to which kind of watch batteries I need to use. All this comes in a little box that has the exactly same markings as the big outer box. For some reason I find that pretty amusing.

I was also amused at how the manual refers to the area around the neck as the cuirass, fitting actually, and the parts that make up the left and right torso (where the chest flaps are) as lungs, also somehow fitting. The manual itself is pretty basic, following the same assembly format that Bandai and so many others have been using for years. There's also a few pages with information about the Banshee, all terribly translated from (presumably) Korean... "As the Unicorn Gundam two machine, this machine was stationed in the earth by Augusta Augusta Lab labratory experiment, a machine was Banerjee links to obtain, Anaheim electronics industry combined with body acupuncture on Unicorn Gundam, accelerated test and assembly of the No. two machine." 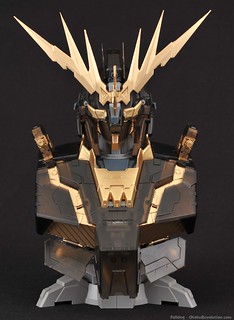 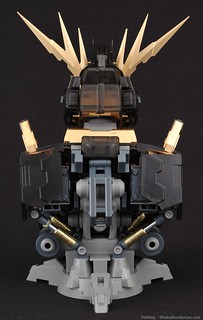 As awesome as this things looks, there are more build issues with it than typos in my review.

The most common issue that seems to come out of Korean and Chinese Gunpla are the fit issues. Maybe a third of the kit didn't go together as smoothly as a Bandai kit would. Quite a few holes needed widening or pegs needed trimming to get parts together. There are quite a few areas that I didn't modify as much as I should've and would need to directly address if I ever get around to painting and detailing this kit. I'm also concerned that some parts might be so tightly in place that they would flex and cause white compression marks even under the most careful disassembly. There isn't much in the way of poor seams or gaps, aside from where the parts aren't fitting as expected, and I have odd feeling that the bust lists slightly to one side.

I didn't have any issues with the plastic itself and it seemed quite comparable to the mix Bandai uses. The runner pressings were not nearly as clean as though. I never thought about how runner molds are made until I started with this kit. Presumably they use a computer aided cutting machine to carve out a few blocks of metal for the mold. Whatever cutting machine Seraph Hobby used isn't nearly as fine as major modelers and you can see the machining marks easily on quite a few pieces. There wasn't much in the way of issues with the runners themselves, though a few pieces had flashing leftover or round marks where the runner is ejected from the mold (that's where I think they come from at least). 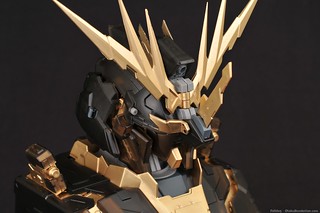 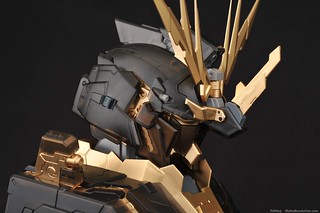 The gold topping used on a few of the runners is pretty on par appearance wise with some of the gold stuff I've seen from Bandai. Unfortunately it rubs off easily and I had to keep wiping gold off my hands after touching the pieces, though not to the point that it had an adverse effect on the appearance. It's not a completely uniform spray either and a few areas look as though too much or to little was applied. Not a big deal as I'd likely end up having to repaint the whole thing just to clean up flashing issues around the antlers.

Most curious of all is how my kit didn't come with any of the power conduit tubing. None. If anyone knows where I can get something similar State side please let me know. Instead of the tubing I actually got two sets of metal vulcans (neither of which are on the kit because that'll require some glue). The pistons aren't bad, just wish they were a bit longer. They're just short enough to fall out without any glue so I've currently got the rear ones held in place with a bit of putty. There is also a similarly designed piston in the center of the kit that they really should have treated the same way.

For the record I haven't bothered to photograph the kit in non-NT-D mode because I'm worried I'd break something along the way. Once everything comes together there's an air of fragility around it that's slightly disconcerting. It's worth noting that the antlers don't meet flushly down the middle when closed, there's a least a few mm of gap there. 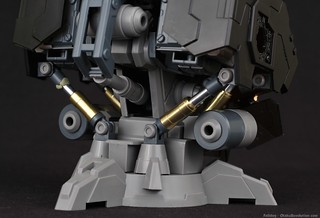 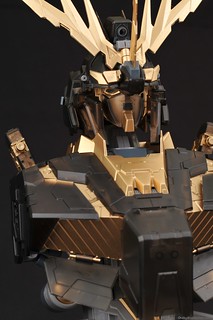 Slight mud slinging aside this thing is a beast and incredibly impressive looking right out of the box. All the quality issues shouldn't be surprising considering the long standing reputation of unofficial kits. It's not something I'm too concerned with, I knew full well going into this that it wouldn't be a spring chicken. Any handy modeler should have no issues carefully addressing all the issues while putting it together. The fact that the thing shipped two double runners for 40% of the kit really makes up for it.

I'm not sure that I'll get around to fully detailing this kit for a long while as my black log is hefty as is. As is I think it looks fairly awesome but the potential for it to look fantastic is there. 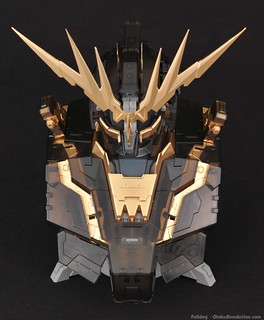