Some Thoughts On: Rebuild of Evangelion 2.0: You Can (Not) Advance

The second Neon Genesis Evangelion film, Rebuild of Evangelion 2.0: You Can (Not) Advance, has hit the shelves over in Japan. While we await a BluRay release here in the States here are our preliminary thoughts of the film.

I'm a pretty big Evangelion fan, and I watch the TV series once every year. When the first Rebuild movie came out, I was immediately interested, even though I knew it would be mostly a rehash of the first few episodes. I foolishly bought the 1.01 DVD instead of holding out for the 1.11 Blu-Ray. Still, I enjoyed the first movie, and how it smoothed some of the narrative out from the TV series. Still, the first Rebuild movie, and I think, by extension this second one, suffers from its own theatricality, it's own pomp and circumstance, it's punch to the face with explosive action and amazing production values. It's too warm. It's too inviting. It's not very Evangelion. It doesn't have the same alarming terror, the same uncomfortable alienation, the same awkward uncomfortableness that so thoroughly championed its themes. While it does take away some of the unnecessarily esoteric elements, it loses something, too, in the very paint-by-numbers, traditional scene compositions. In short, it's very pretty and entertaining, but it's just not as provocative. That isn't to say I disliked 2.0 (or rather, 2.22, the version I watched). In fact, I loved it. I would watch it again. Several times. Hopefully on Blu-Ray, on a HD TV, and soon (please, Funimation!). It was packed full of cool things. There were very interesting takes on the characters to go with their familiar basics. There was excitement galore in the tremendously riveting action scenes. The voice acting was solid. The music was great (though they tried too hard at times to have soundtrack dissonance). And most importantly, new Pen Pen material, one scene of which confirms his role as a born leader of penguins, a Patton of penguins, if you will. I even sort of liked the new girl, Mari, though she was little more than an action figure. A production value feast as this movie was, I just feel that my preference remains the television series. While this is a good compliment to Evangelion, I can't accept it as the "new Evangelion". - Penguin Truth
========================================= 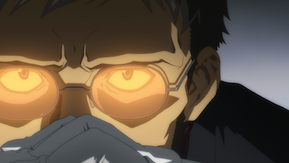 2.22 continues in the path of 1.11 by being visually amazing. It's easily one of the most amazingly detailed Anime films yet. Tokyo-3 and the surrounding areas have become one of the most detailed and inspired fictional metropolises to grace film. Just take a look at this, or this, or even this. (SPOILERS!!!) If anything, the only issues are the Eva units themselves, whose simplicity stands in contrast to the detailed scenery. In some scenes they're animated, sometimes too simplistically, and in others they're CGI. I need to throw together a comparison of the graphics in the movies compared to the original series. The extent to which it's been classed is astonishing. One of the most important things to note is that rebuild movies are presenting a whole new Shinji. Instead of the angsty, depressed, why should we give a fuck about this kid from the series he's emotions are a lot more balanced and rational. He smiles, has a good time, and genuinely enjoys his life. Even when he falls into a rut he's quickly able to sort things out and come to the rescue. It's not a painful, drawn out experience for the audience anymore. Plus, once he's piloting his Eva, Shinji becomes a bad ass. With all the hair on fire, kick reason to the curb, manliness that for him seemed impossible. This alone is a reason to love the retelling. I said some stupid shit about the soundtrack when this movie first hit the net. Instead of sitting through I was jumping around, waiting for subs. At first I thought the music was shit but upon a proper (and second) viewing I've reversed my opinion. It's quite good, but it does have it's quirks. In scene or two the music seems out of place and the exaggerated guitar during the signature track annoys the fuck out of me. During two riveting scenes the music shifts to what I've been told are 40-year old Japanese kids songs. During the first scene it ads a nice level of creepiness, while in the second, I feel it sucks all the drama right out. Which leads to a point Mike hit on before me, the movie lacks that oomph that the original series had. The angel redesigns don't seem as menacing and there's no sense of fear that comes with their attack. In ways they're more campy, more 'uhh, what's going on here'. Gone too is the idea that humanity is barley hanging on. Even at the darkest hour I was never struck with anticipation. The worst part about this entire experience is that the next movie won't reach us until 2012. The first film was released on DVD back on April 2008. This precedent leaves us with a fantastic two year waiting period. With the way they've improved upon the characters, and ironed out the story, the remaining chapters should present an ending that will completely blow away End of Evangelion. - Falldog P.S. - Don't forget to check out the Evangelion section of our image gallery, with over HD screen shots of 2.22
anime
evangelion
movie
Neon Genesis Evangelion
2.0
You Can (Not) Advance
Eva
2.22
Rants & Raves