"I'm trying to get on a plane heah, ya chowdahead!"

Professor Milo's out of school, Batman fights ghouls, and Steph acts the fool in the underwhelming forty-fourth installment in DC's usually good weekly Batman tome. Ah, the supernatural part of this storyline. I thought you'd been put to bed with the destruction of Arkham and Jim Corrigan's exorcism of Maxie Zeus. If only it was. But unfortunately, we return to all the ghost crap because Batman recalls that Milo (now a professor appearing in the Gotham Academy book) was involved in that whole haunted Arkham situation with Deacon Blackfire, and Milo's coincidentally making his way to a plane out of town. I guess his students don't have to complete all their homework.

Professor Achilles Milo was sort of a generic mad scientist character that Bill Finger himself created, but wasn't used all that often. I think the only really stand out story he appeared in was Batman (Vol 1) #255, "Moon of the Wolf" where he turned a man into a werewolf for the express purpose of killing Batman. He was likewise a very minor presence in the DCAU, appearing twice in Batman: The Animated Series and once in Justice League Unlimited, ultimately murdered by Doomsday. He's always been a very "blink and you'll miss it" part of DC, and it's weird to see them wasting so much ink on him in this storyline, because he's not at all interesting. 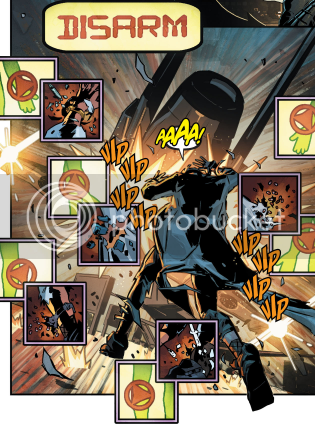 "Disarming? That's what they were doing in Arkham! Hi-yo!"

It seemed like Milo was just being controlled by the spirit of Deacon Blackfire while he was helping him under Arkham, trying to resurrect him and place him in Maxie Zeus' body, with the help of Joker's Daughter (ugh). But apparently there was somebody else pulling the strings and Milo was invited just like Falcone, Hush, and Hatter. Now a group of vengeful spirits have come to shut Milo up and tie up loose ends, and I think Batwing is about to get back into the game to assist Batman in fending them off.

Speaking of Batman's merry band of helpers, while Stephanie Brown seemed to be starting to get along with Harper at the end of the previous issue, she's convinced that staying with people connected to Bruce Wayne is dangerous, and is trying to flee from protective custody. From her perspective, I suppose it makes some sense, since she doesn't know that Bruce Wayne is Batman and wouldn't be helping her father, except she hasn't put together that if that was the case, they would have already gotten rid of her. Harper, for her part, is just itching to prove herself to Batman, and isn't about to let the key to the whole shebang loose (though she should probably contact Batman or Red Robin about what Stephanie knows), and the two clash again this time violently. I'd like to see Harper win, but Stephanie became a ninja pretty quickly.

"Of course, I'm going to have a hard time telling them without teeth."

Anyway, I'm hoping this series gets back on track after the next issue, which, from the preview I've seen, just has more ghosts and junk. Blurgh.

Next Issue: Let Bygones Be Bygones!

"I'll be back in a moment, Milo. Gonna see if this airport has a Cinnabon."