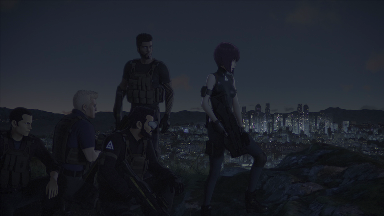 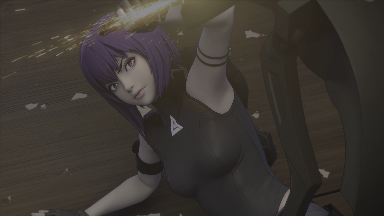 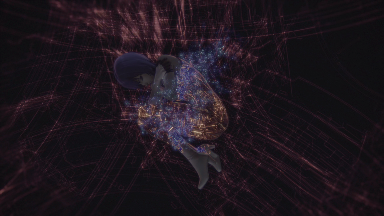 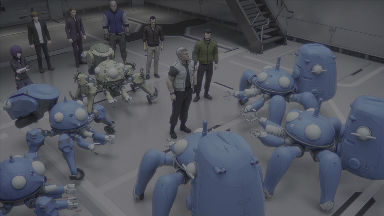 The CG was a bad move. The CG doesn't look good. I mean, it looks good if this was a Ghost in the Shell: Stand Alone Complex video game made in the early aughts. But for a professional TV series production in 2020 that's supposed to be a sequel to a beloved anime classic? Nope. People are going to refuse to watch this based solely on the CG. And I won't lie, it's a major obstacle to enjoying parts of the show.

I was willing to give it a shot, I gave it a shot, and it still looks dodgy and off-putting, even for a show about artificial life and net diving. So I'm not going to sit here and make apologies for the quality of the CG, because outside of some of the combat scenes with the Tachikomas, it's a hurdle, and the sequel to a beloved anime doesn't need hurdles, it needs a smooth track to get right back into things.

But allow me to say, "That aside." Because Ghost in the Shell: SAC_2045 is not a bad series. It's actually a rather compelling series, despite it's notable handicap.

The question is, is SAC_2045 in the same vein as the previous seasons of Stand Alone Complex? The answer, I believe, is a qualified, "Yes."

Does it examine man's relationship with technology and the rapid expansion of technology as it pertains to world politics and human identity? Yes, it does this, with the reoccurring plot elements of "sustainable wars" that keep the wealthy busy manipulating world events for economic gain, the Global Simultaneous Default which had the suspected intended purpose of setting all money and debt to zero, only to actually make things more difficult for the working class in the long run, and the "post-humans", people who suddenly and without warning underwent transformations into uber-cyborgs who can do almost anything.

Does it feature eye-catching, exciting action sequences? It does at that, whether it's the GHOST team, roped into an American-led mission to capture a post-human in his palatial mansion, being ran circles around by an unexpectedly formidable opponent or racing to stop a head-smashing assassin from killing the Prime Minister. Granted, there's not a lot of concentration on action scenes after the first six episodes, but that allows the few that do occur to seem more pointed and less like excuses for combat. My favorite action sequence is the battle against the drone in episode 2, where the Tachikomas have to give it their all to stop it from reaching a gated community. The tussle between several non-human combatants allows you for a moment to forget that the CG does the more human characters no favors.

Does it have emotional resonance? Again I answer in the affirmative, being drawn into the increasing desperation of Togusa to locate and reunite the members of Section 9 before the US government eliminates them, the pathetic state of the senior citizens that have been screwed over to the point of robbing a bank to get money to pay for their basic needs, the turmoil of the Prime Minister trying to please the Americans without simply being a puppet, and the guilt-ridden outrage of middle school student Takashi Shimamura (played ably by VA super star Megumi Hayashibara) who finds himself at the crossroads of humanity, haunted by something he couldn't possibly have helped.

Now, does it have the philosophical rigor and mystery-building complexities of the preceding seasons? Not quite. At least, not in these first twelve episodes, it doesn't. The best it can do is heavy-handedly referencing George Orwell's 1984 in the last two episodes of the dozen, which has yet to bare any fruit. And the plot is almost too easy to follow when compared to the various factions and character agendas weaving in and out of the plots of the first two seasons. It may help the central storyline that the series is mostly serial storytelling with few one-offs, but at the same time it leaves little breathing room and gives you little more than what it wants to say directly, which isn't a lot so far.

The characters are basically who you remember them as, as far as the ones that get highlighted, which are few. The Major, Batou, Togusa, and Chief Aramaki are the only standouts, but retain their seasons 1 and 2 personalities, for the most part. You don't get a lot of play for the other Section 9 members,  save for the newbie Purin, the Batou fangirl in charge of the Tachikomas' maintenance. I haven't decided whether she's more endearing than irritating, but she can be either, from scene to scene. Togusa is divorced now, which I'm not a fan of, but is largely still the same. I wish they'd give Saitou, Boma, Pazu, and Ishikawa a bit more to do.

The music is nothing special, with the opening theme especially annoying, and the BGM missing that Yoko Kanno magic the first two seasons had, now replaced with some pretty generic Hollywood action movie soundtrack work. I can't think of a single track that stands out. If you were to play this music for me isolated, I wouldn't be able to point to a scene any track was in, like I may with the Kanno soundtrack. At least the ending theme has its charms.

The problem with SAC_2045 isn't that it's not Stand Alone Complex, because both in name and spirit, it is. It's just that, that spirit has somehow been diminished under the stress of less-than-stellar production values and decreased vision. Anime is a visual medium, and the production values matter. Perhaps not as much as the plot, characters, or themes, but they matter. This series is Stand Alone Complex, but it's muffled, blunted somehow. It will seem dated long before the old seasons, which still hold up, do. It's a decent sequel, but unlike previous seasons, it's not a classic.

But hey, at least the English dub cast is returning, like the Japanese one. It's good to have some continuity. If only the powers that be felt that way about the animation. 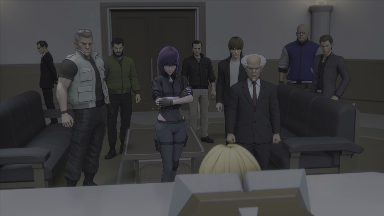 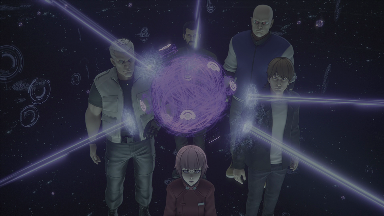