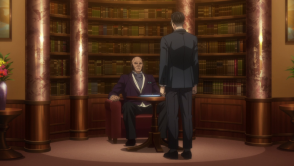 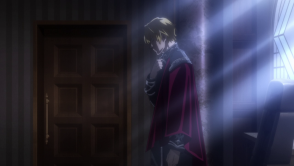 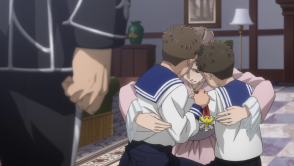 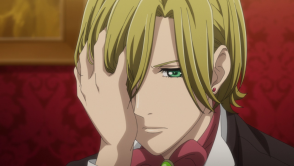 In the aftermath of Geiersburg's destruction, the Empire reacts to the loss of Kempf. This and the next few episodes will be set up for the next major arc and the next major battle. And as a bonus, we even get a bit of Yang's patented wisdom. Not as exciting as last episode, but still solid.

This episode was basically a beat-for-beat, direct adaptation of most of Chapter 9 of Volume 3 of the LoGH books. Rubinsky talks to Kesserling about his mother, Reinhard forgives Mueller's defeat, Schaft is arrested, Kempf's widow grieves with her sons, Reinhard and Hilda have a discussion about his successor, Hilda frets about Oberstein's influence, Reuenthal and Mittermeyer talk, Yang is sick and gives Julian a speech about violence and history. All covered here with few flourishes. The only things different were that in this episode, Reinhard is initially furious at Mueller, but forgives him after reflecting upon it and this episode lacks the bit with Baron von Kummel, Hilda's sickly cousin. Maybe they'll include that later.

We get an early lamentation of "If only Kircheis was still here!", something we'll hear quite often in times to come. Many characters believe that history would have been very different if Reihard's redhaired hetero(maybe) lifemate hadn't been killed by Ansbach back at the end of season 2. Here, Hilda is referring to Oberstein's extreme pragmaticism, and how Kircheis might've served as a counterbalance to it as an influence on Reinhard. Hilda fears that she'll be unable to fill the role herself, given Oberstein's frankly unrealistic insight.

Reuenthal is starting to falter a little in his estimation of Reinhard, wondering if he really appreciates the work and loyalty of his subordinates. Mittermeyer assures him that Reinhard only has what's best for the Empire in mind, but the seeds have already been planted in Reuenthal's ambitious mind. For the time being, he will remain loyal, but who can say about the future? (I can... I've read all the novels.)

Phezzan is working its wicked magic in this episode, stealthily leaking the information about Von Schaft to the authorities on Odin. Reinhard knows they're up to something, but figures he can use them for his own ends. It's going to become a game of who's really using who and who can out-use the other. Rubinsky is a shrewd and careful man, but he might have to compete with his son, Rupert.

And finally, we have Julian picking Yang's brain for a while, getting an earful about the use of violence and how the pen can ultimately do more than the sword in the long run of history. This, of course, is a pretty optimistic view, though. While historical figures can be impeached by the pen, the people who write the history can just as easily lie and twist facts to suit sensibilities. For somebody like Rudolf, it was easy for freedom-loving republicans to convict in history, but I imagine history was written quite differently in the Empire. Still, Yang's general point is salient.

Next week we should see Schumacher and Lansberg arrive on Odin to carry out their plan. Whether or not we have to wait another week for it to go into action is anyone's guess. 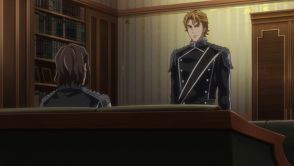 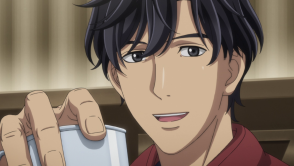