Legend of the Galactic Heroes: Die Neue These Episode 40 Review 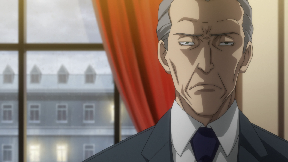 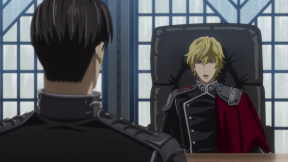 Synopsis: Boltik frets over Reinhard's request, but insists on continuing the plan to kidnap the Emperor. Oberstein advises Reinhard to make human sacrifices if necessary. Later, the two discuss who to put on the throne in Erwin Josef's stead. Alfred von Landsberg and Leopold Schumacher lay out their plan to penetrate Neue Sanssouci to kidnap the Emperor. They decide to use the underground passages to sneak in. Schumacher has his doubts about the mission, but ultimately decides to commit as a military man. While the Phezzani office provides a distraction for the MPs in a different part of the city, the two former members of the Lipstadt Alliance make their way through the underground labyrinth, sneak into the Emperor's room, and steal him away in the night. 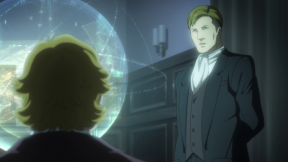 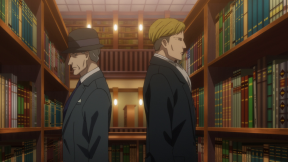 The insidious plot of the Black Fox of Phezzan finally kicks in gear as Landsberg and Schumacher kidnap Erwin Josef II from his bedroom at night and steal away with him to parts unknown. Well, not entirely unknown, I've read the books and saw the OVA, so I know exactly--- well, you get the picture.

The episode is a mostly straightforward adaptation of Chapter 2 of the fourth book, from Boltic's concerns in his office, to Reinhard's conversations with a cold, calculating Oberstein, to the kidnapper's plan of action in infiltrating the palace, to the execution of that plan, there's only a few changes. One is that there's an extra scene before Landsberg and Schumacher head underground through the passageways, where Schumacher demands of Boltic a distraction so the two can carry out their plan. Schumacher makes it clear that he's only doing the mission out of his pride as a military man. The other change is that, apparently, the two kidnappers merely walked the entire distance of the labyrinth, rather than, as in the book, using a small vehicle through most of it. I guess it's what, more romantic, that way? Or they'd have trouble justifying getting that vehicle in and out of the tunnels without suspicion.

Oberstein is an interesting character because while he seems emotionless, he's just the ultimate pragmatist. He's willing to put others on the chopping block if that means obtaining a goal, but that also includes himself, if necessary. In this case, it's clear that Kesler and his subordinates will be disciplined if Reinhard allows the plot to go through, because it will make the Imperial MPs look incompetent. Oberstein makes an argument that it is even doing the officers a kindness by punishing them, because "sometimes granting death is one way to reward loyalty". It makes some sense, because it's allowing them to keep their honor that way, but it's still brutal that they be made to be punished for something that's not entirely their fault.

Reinhard, meanwhile, is willing to put an infant on the throne to replace the current occupant when he's taken. This is the ultimate insult to the Goldenbaum Dynasty, in Reinhard's estimation: allowing the great throne of the dynasty be used as a plaything for somebody who probably isn't done being nursed. How far has the mighty Goldenbaum flag fallen!

I'm also amused by the situations Landsberg and Schumacher find themselves in. Landsberg is this optimistic poet with a flair for the dramatic, thinking he's some grand knight on the way to save his king. He's ridiculously deluded, but not without any senses, as he draws upon his knowledge of the palace grounds to make the two's plan work. Unfortunately for him, when they finally reach the holy inviolable emperor, he's a bratty little sociopath with no care for Landsberg's ideals. Schumacher, meanwhile, can see all of this for what it really is: a base kidnapping plot without any real dignity. It's a farce, as he says.

Next time we'll see the next stage of the Phezzani plot, and it's got a flair that Landsberg would adore. Maybe we'll even see some FPA characters, if the episode goes far enough into the material. But I wouldn't hold my breath if I were you. 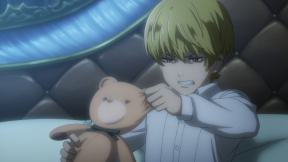 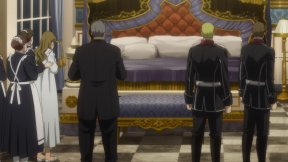