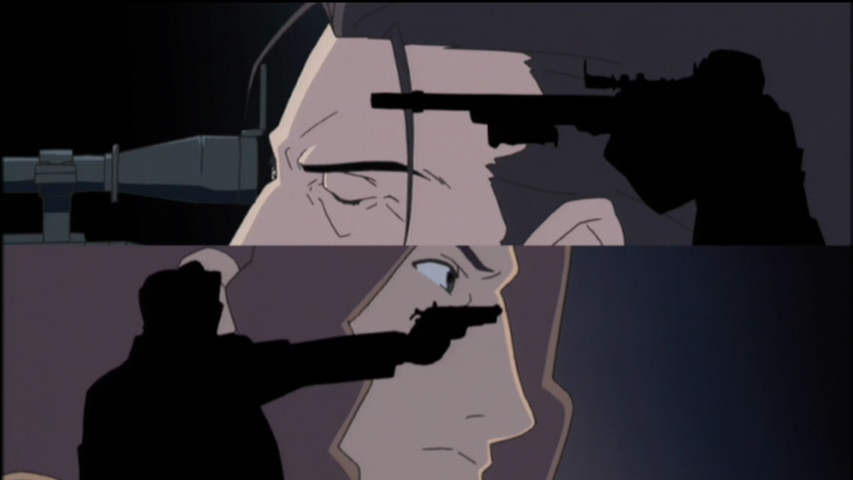 The PG rating’s a good thing by the way. This means no chance of insinuation over whether or not an act of taboo is being proffered. However, if it were the OTHER Professional, the one who is also an animu, then this episode would be kinda boring. His surliness has to go hand-in-hand with the sleaziness of his world.

Almost Animu for All Ages up in here, yo.

This is as of yet the highest point when it comes to an overall solid episode. Tension is right, the pacing is right, and the kind of conflict this episode presents is welcome. The fact their antagonist is a sniper, a profession involving pretty quick results unlike the plotting and planning of previous foes, helps matters. So this sniper comes to Ishtar for some job after killing off some celebrity of sorts, and it is up to L/R to stop him from killing his target. Matters get complicated when his daughter, unaware of his job, makes friends with Cloud 7 (beginning with a might bit cute scene with her and Rowe), allowing them to use her to their advantage in figuring out who he is going to kill.

The last bit provides a nice moral element to our heroes, with Rowe being the more taken aback by their actions than Jack. However, given the stakes, it is somewhat understandable, and their acts only go so far as surveillance and eavesdropping. The real fun comes in the unexpected (to them anyway) twist that the true targets are L/R themselves. The scene where Dez realizes how his predictions are wrong regarding the sniper’s location allows for a welcome off-guard moment for everybody, showing L/R in legit mortal danger without recourse to remedying it (like say the knife fight in Episode 1). We also get to see perhaps a new shadow organization gunning for them? It’s hard to say because the main guy here speaks of L/R with a bit of familiarity, but we don’t know who he or his organization is quite yet. It does not help matters that he is dispatched with ease by Jack near the end, so it is a revelation for another time I guess. A shame, but not TOO much a disappointment.

We do get one last bit of world building when Rowe faces off against the sniper. The latter details how Cloud 7 is not as clean as it looks, and dismisses Rowe’s subdued but present patriotism and loyalty to the Ishtar Crown.  It is a good moment for the rogue-ish Rowe, revealing more of his soft heart under his lackadaisical demeanour. Then he has Jack spare the sniper and all is well, because after all, they were only tasked with STOPPING the sniper, did not say anything about KILLING him.

A neat bow on this episode to be sure, but given the light-hearted tone of the show, it is anticipated and welcome. Everything works here, even the little girl whose precociousness puts her leagues above the boring Noelle. Slowly but surely the show is showing it can be exceptional, and this episode is a good start to it. I hope.