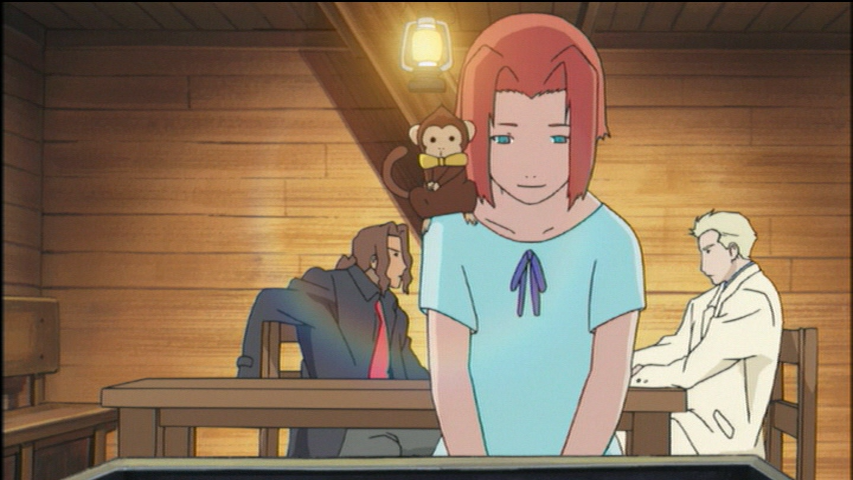 Man, Jack and Rowe must be having a most intense staring contest with one another in that shot.

Jumping into the thick of things, it is up to L/R to continue their mission to find and detain the elusive Angel, who was not Jack’s old flame after all. After some detective work, given the use of old Ivory Island songs, they decide to well… go to Ivory Island. This means we not only see Noelle again, but also get a ground-level view of her island. I guess Ivory Island is supposed to be a takeoff on the hinterlands of the UK, given Ishtar’s propensity to appropriate Anglo-Saxon culture? It makes me wish I knew where Ishtar was on a map since it has already ran the gamut of various geographic locales from mountain ranges, deserts, and now temperate island zones. This all seems very ill-defined and as a result is off-putting, at least to me anyway. Ishtar is such an isolated microcosm. 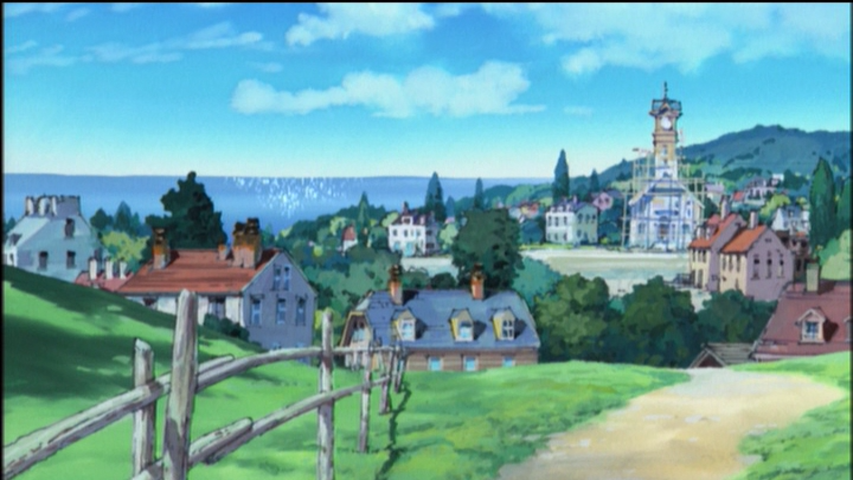 This said, at least they know how to nail bucolic island village aesthetic.

So it turns out DTI has a vested interest in the island due to its surplus of a non-radioactive metal named “Ivory Stone”, and as a result, essentially put the entire island under its thumb. The worst part is how this all done under the implicit blessing of the Ishtar Royal Family, hence the animosity Ivory Islanders have towards the mainland. The divide is made effectively clear when they used a previously-seen minor character abusing the locals, vis-à-vis the way they treat Jack and Rowe after show them up. The reunion between them and Noelle is very subdued, for most of their interaction is with the girl’s grandfather. In another nice use of juxtaposition, we find out what is up with the entire 15-year Princess rigmarole by way of L/R’s conversation with said grandfather, but Claire’s candid talk with a young member of the Royal Family. Long story short, the 15-year thing is because that particular age is the moment an heir to the royal family is considered eligible to ascend to the throne.

Needless to say, the aforementioned young royal’s father doesn’t want that given his reaction to seeing Claire handling a clock necklace similar to that of Noelle’s. This leads to a very large overreaction from him, since it involves scrambling actual military jets and Special Forces to assassinate Noelle. The fight scene between L/R and them is a good affair, since there the stakes are raised and as a result, the production team does not skimp on the intense, albeit brief, action. The show looks like it is stretching its legs when it comes to spectacle, and it is my hope they don’t skimp out as it moves into the second half of its 13-episode run.

The show cannot afford to skimp out. We’ve a Noelle strangely copacetic with the revelation she’s an Ishtari princess when Camille comes to take her back; and while she is considered an “Angel” by the islanders, we still do not know the similarly-named mastermind behind those bombings. Couple all this with new palace intrigue, and you have a show that needs to nail it if it wants to at least end with a bow.

Or at least enough of one given how it is universally forgotten than it is loathed.