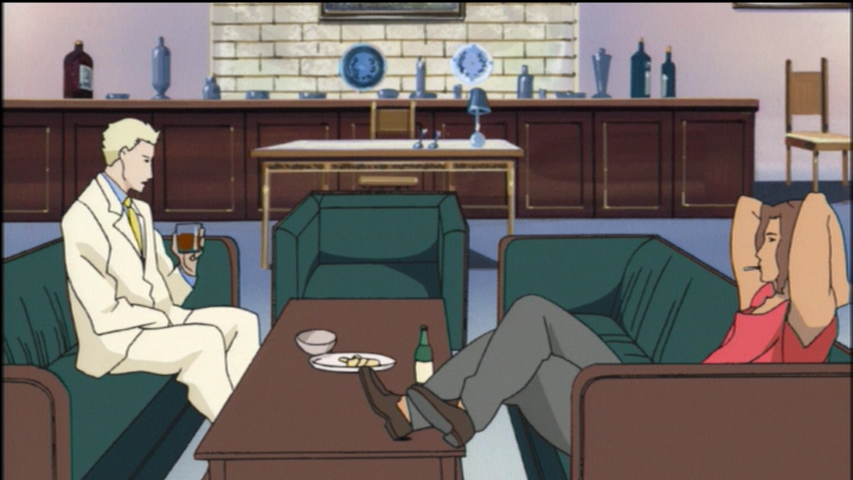 They’re still having that staring contest since the week before last. Man alive…

In a moment of serendipity, it seems that two week gap between this article and the last coincides with the time passed in the show. L/R’s been doing their thing, and Noelle’s been doing her own thing. The thing is, they haven’t doing a thing involving each other since Angel Island. The former has been keeping a guarded distance from her due to the Angel matter, which is unfortunate for the latter who wants to see both of them. You can tell Noelle’s trying her best given the circumstances, but it is also prevalent how she feels like a caged bird given her new status. Interesting, given her more than affable acceptance in the last episode. Maybe she didn’t anticipate it’d be this difficult?

Anyway, the real crux of the episode is not so much about them thinking about one another, never mind about the case L/R has in the episode. It’s all about the intrigue here, baby, and… it’s there. Like everything else in this show as of yet, it’s not great, but it’s not BAD. Duke Rand, whom we were introduced to last episode, is at odds with the current developments what with his failed assassination attempt. To this end, his actions allow us an introduction to the head of DTI, who’s a bit more endearing than the weasel we saw a couple episodes back. He’s still a bad guy, but that blustering English accent they give him in the dub makes him hilarious when he isn’t scarfing down fried chicken fed to him by… what can be defined as hot women given the animation budget this episode. Lots of big world building bits are fed to us this time, with various locations and events (the expo in Episode 5 I believe, and the dome in Episode 6) revealed to be the result of DTI’s investments in Ishtar. Bits of information like this are nice to have as the second half begins, with the guaranteed eventuality of an intense endgame appears. Heck, it’s even implied how old Mister may have some skin in that game. A shame really, how can William Morgan Sheppard betray us so?

Either way, I remain interested. The other part involving L/R? Not so much. It’s another ‘seize the treasure’ case like the first episode, with the usual switcheroo and witty banter. There’s an okay action sequence where Rowe subdues a dozen henchmen armed with machine guns, and Claire gets to be cool for once when the villains do a switcheroo too. Not much, but I guess it is nice for them to do something while the intrigue rolls along. Plus we see more corruption rampant in the higher echelons of Ishtar, what with the issue of stolen treasures still being a thing. So it works enough.

This all works enough. I’m not TOO overjoyed to be back, but it’s nice to see this show again.