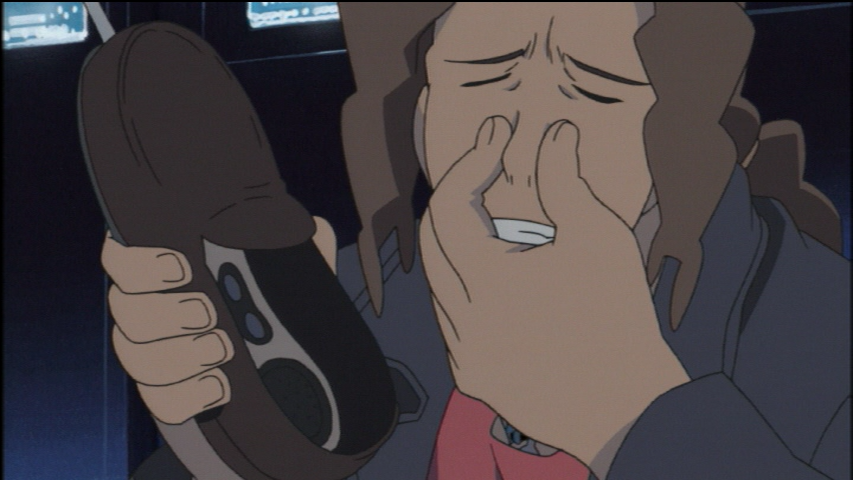 It seems popular foreign television doesn’t make its way to Ishtar much these days, for Des seems to have only heard OF Get Smart, but has never watched it. Cute cultural gags which are funny in and of itself without one knowing the existence of Get Smart, goes a long way.

So this week is where Noelle gets to hang out with Jack and Rowe again after the events of Episode 7. To the show’s credit, it does not waste any time with having to set up the situation where Noelle escapes her bodyguard’s watch. Right off the opening, Claire has already replaced Noelle, who is supposed to be at Ishtar’s first baseball game. So what wacky adventures do those three have now that the princess-in-waiting’s on the prowl?

Well there’s the part where Rowe is stuck in a cable car that ferries people between the towers of the DTI Headquarters, and then there’s the part where Jack spends a minute or so talking about diabetes to an old lady whose diabetic husband is on said car. The latter part is the adventure more interesting to me, given how the episode allots such an amount of dialogue on the matter, given the circumstances and expectations for the episode. It is not the fact it exists, but also the way it is executed. The scene is quite boring, given how it just cuts between shots of the old lady and Jack as he divines from her the severity of the situation given the needs of the diabetic. It probably doesn’t help that the dub is also pretty mellow and kinda wooden about it. It seems strange given how this is a situation where unlike a stuck elevator where people can access it with ease, the cable car is more out of reach and thus the need to get to it is much more intense.

Anyway this is a rather unnecessary rumination, but then again the guiding plot of the episode (save the cable car) isn’t all too interesting in and of itself. What happens around the event is what matters and what the show I believe wants us to be focused on (for better or worse). The passengers in the cable car aside from Rowe are a potpourri of nondescript characters that we will probably never see again. So there must be something to it, which would make the process of escape more interesting. Well the diabetic guy in the cable car has a son playing in the baseball game, who doesn’t like DTI, which causes an employee of said company to berate him for it. So now we know there the enmity created because of DTI’s involvement with Ivory Island is being spread to the mainland. We then find out the stuck cable car is not by accident, but by intention thanks to the elusive Angel. Thus, we get a mild double whammy of sorts given the need to get a diabetic some insulin, never mind stopping a bad situation from becoming worse.

Then Rowe saves the day I guess with a somewhat intense retrieval of the medicine, defuses the bomb with dumb luck (given how it doesn’t explode), and everything is fine again… again. The show is fine again. I say that not as a dog in the middle of a burning apartment, but in the middle of a very drab unimpressive, functional apartment with the occasional amusing knickknack. I’m sure they could’ve gone a more exciting route (a more exciting variation of their time in Episode 3) where Jack, Rowe, and Noelle get into trouble in Ishtar, but instead we got this. Some interesting revelations (including Mister being cozy with the DTI head never mind the diabetic) and some okay interactions are here, but overall, just… fine.

I guess you kinda have to be if such revelations nevermind a long talk about diabetes are the only things catching the eye.