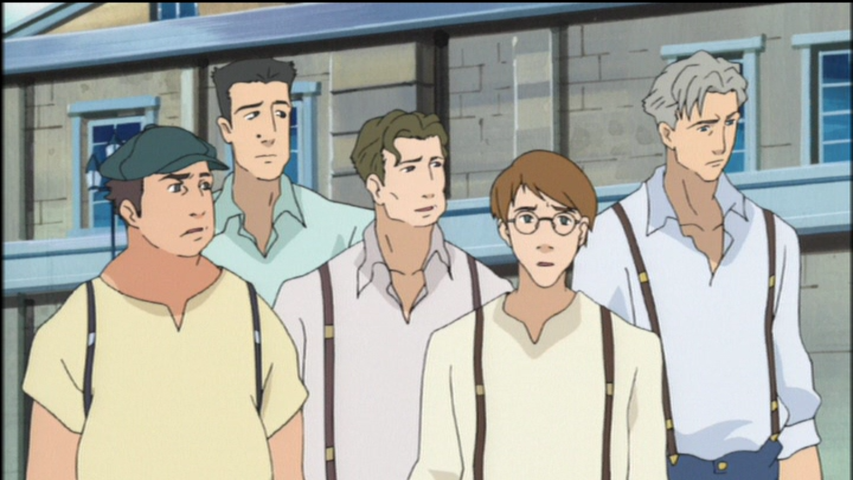 Now here’s an entry to the Profiling section of your brain: White men in white collared shirts wearing suspenders and speaking in Irish brogue. I suggest placing it a bit higher over "Bearded Brown Men in robes."

Of course the people most critical of the English-accented Ishtar would sound like Irishmen. Of course.

This episode pleasantly proves me wrong when it comes to expectations. I was bored last week, yet here I am rather intrigued once again. There’re no L/R antics to be had in this episode, since the two parts of it go off on their own to figure out the Angel situation, never mind the shocking revelation about Mister. Jack goes off in that direction, seeking to corroborate Claire and Dez’s claims of the night vis-à-vis any new revelations. Nothing much to be said there, since this episode is not going to be the Hofner Half-Hour.

In actuality, it’s moreso… the Rowe Show. He gets the Angel side of the situation, and his interactions with Noelle, never mind some surprising returning characters are all quite good. His scruffy, brazen, demeanour makes for a great scene with the former character, since it allows her to let out a bit of sadness behind her strong demeanour. It helps how her voice actress in the dub has come along with the character, nailing her struggle. It is not just becoming a Princess and being out of Ivory Island that bothers her, but also becoming privy to the palace intrigue which claimed her father’s freedom and exiled her and her mother. How far down does that rabbit hole go? We’ll find out in the next three episodes.

The surprising returning characters though are the bigger highlight. Remember when I said last week how the entire episode consisted of characters we would never see again? It turns out we see ONE of them again and he is part of a cell of returning Ivory Islanders who just so happen to be Angel. The scene with them talking about the efficacy of their plans to drive out DTI and Ishtar from the island is an insightful one. The most aesthetically pleasing of the lot is not at all pleased at Noelle’s new status and thinks of her as a traitor. Yet when it comes time for them to set off their next bomb, a charming ruse by Rowe in which the Princess makes an appearance at their target gives them cold feet. Hard feelings abound in this episode, and the end sequence helps close it all out in a touching way. There’s a lot of love, hate, remorse, uncertainty, and sadness in this episode, and it carries it all off quite well.

It is unfortunate for everybody however when DTI still comes out on top and parades them all in front of the mass media. They’re not making themselves look any better, never mind Mister. Rowe is pissed, Jack is probably pissed, Noelle and Claire are saddened, and Miss Camille is frustrated. What can be done at this juncture?