Episode 08, "Who Has the Black Notebook?" 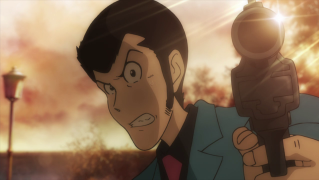 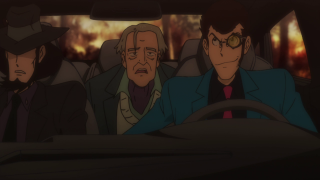 Synopsis:  At Gaston's grave, Lupin and Jigen meet Camille Bardot, a retired detective with photographic memory. He reveals that he was the one who commissioned Gaston to copy the original black notebook. However, a group of assassins target Camille and Lupin, and the detective is gunned down. Lupin sets up a meeting with Albert to hand over the book, hoping to outwit his old nemesis with a few tricks. However, he underestimates his opponents' powers of observation. Is Lupin's showdown with Albert a bridge too far? Watch out, Lupin! 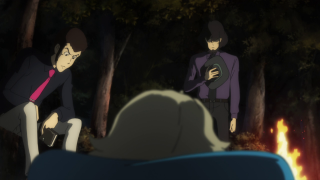 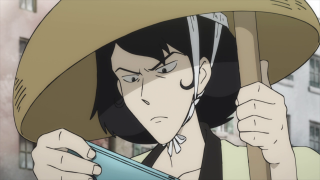 Another excellent episode, courtesy of a continued story arc and some compelling character dynamics. If the show continues at this level of quality, it could very well become my new favorite of the Lupin TV shows. And I usually prefer my Lupin adventures as one-offs, so that's saying something.

One thing confuses me, though. Are Albert and Guillaume both directors at the DGSE, and are they in competition with each other? I assumed in my review of the last episode that Albert was some higher up, because he wasn't bothering to get his hands dirty, while Guillaume was willing to lead a sting, but it's the opposite in this episode with Guillaume ordering a hit and Albert getting up close and personal. It seems like they would be coordinating their efforts, but I get the feeling that each wants the notebook for their own purpose, or the same purpose, but with them as the sole beneficiary. They both seem to be acting under their own initiatives, though Albert also seems to have an inside man keeping an eye on Guillaume. I'd be interested in seeing what their professional relationship is like.

Speaking of relationships, it turns out Albert is in one, with another dude. Surprisingly we get a LGBT villain who isn't just some prissy stereotype. Albert is a professional, and while crooked as the day is long, is shown to be impressively resourceful and incredibly clever. It's certainly a welcomed change from characters like Herr Maphrodite, the woman-hating, cross dressing sissy Nazi from Pursuit of Harimao's Treasure. I even kind of like his boyfriend, if Lupin was playing him right while disguised. Who doesn't want a home cooked meal when they get home from a long day of being a bastard? I hope we get to meet the real... Tickey Pasco. Interesting name.

What isn't quite as refreshing, in that it's used constantly, but is still kind of cool, is another group of colorful hitmen targeting Lupin. He just cannot get a break from these types. I suppose when you're a master thief who finds himself in possession of things people in power either want or want to destroy, you tend to attract the armed crazies. The chief gunman (or woman) in this episode is the long-haired blonde with a mask that resembles the one Schwartzwald wore at a party in my favorite episode of Big O or the Phantom Renegade from Medabots. At least half of the mask does. It's Camille who ultimately puts that one down, though at the cost of his life.

What kind of name for a man is Camille, anyway? I mean, I heard "Camille", and saw him, but it wasn't a girl! What do you think, Kacricon?

There's not a lot of Jigen in this episode, aside from him sitting out Lupin's plan to get at Albert. He stays home trying to resist the urge to call in Goemon, but ultimately decides he cares after all and does so. But unfortunately, Goemon, the walking anachronism is not good with smart phones. After damaging the screen out of exasperation, he gets a group of children to answer his phone for him. This reminds me of the "Samurai Freund" episode of The Woman Called Fujiko Mine. Kids love Goemon and... he's receptive to them on occasion. The next episode preview shows we'll see more of he and Jigen as more assassins strike.

Lupin was outdone at the conclusion of this installment, completely outsmarted by Albert. Not only did the smug bastard notice his switch out with the gun, but also rid his car of the explosive as casually as flicking a finished cigarette. Lupin probably should have taken extra precaution and warn some kind of body armor, because that wound looks pretty bad, but as usual even the smartest baddie can't help but leave him alive to gloat. Albert will probably end up regretting that.

Anyway, I loved this episode. You know Lupin will survive, but you still feel bad for him at the end for having been outwitted. Are you telling me a guy who outsmarted Leonardo da Vinci is defeated by some government desk jockey? Not likely! 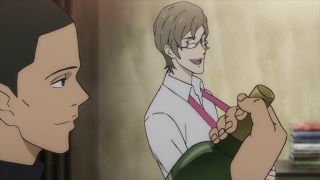 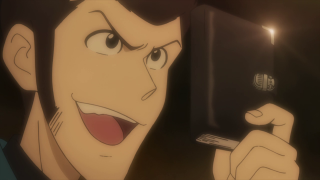