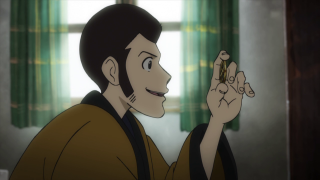 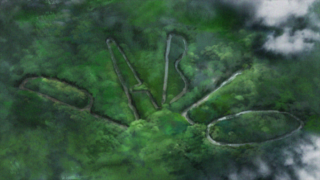 Synopsis:  Lupin is eyeing the Pablo Collection, the treasure of a South American drug kingpin. Trekking through the jungle, they're pursued by Pablo's ex-lackeys, but manage to find his loot: a collection of classic cars. But suddenly, Lupin's challenged to a race from a Pablo himself, and things don't go as planned. With the military firing cannons at them, can the Lupin gang avoid being blown apart? Friendship is challenged in this spirited safari! 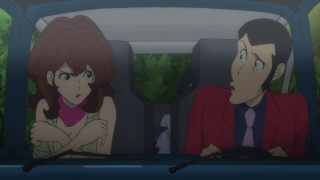 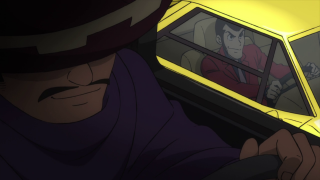 Ah, the red jacket. Monkey Punch prefers it, you know. And this episode is a concerted effort to reflect some of the tone of the second TV series. I mean, as far as there was a general tone. It could vary from episode to episode, but it had kind of a jauntier, light-hearted tone, but could be a little serious, almost dark on occasion.

This episode obviously ramps up Lupin's unquenchable lust for Fujiko, which was constant a thorn in his other partners' sides in Part II. Actually, even I was starting to get a little creeped out at how shameless Lupin was getting, even if Fujiko could be a pain at times. She didn't even betray him in this episode, but he left her behind in that crappy submarine she barely made it out in. You have to feel a little sorry for her.

Mostly this episode is about Lupin's friendship with Jigen and Goemon. When Lupin plans on staying behind, he finds that both Goemon and Jigen were planning to be the ones to do that, so the rest could escape in the sub (it would only fit three people). They even start arguing over who should escape. After spending most of the episode sickening the gunman and samurai with his advances on Fujiko, Lupin expresses his appreciation for his male comrades. "I seriously have the best pals in the world." And they have you, Lupin.

What really confused me about the episode, though, was the whole ghost story angle on Pablo's treasure. I'm assuming the race happened like it looked, with the cars in pristine shape, Lupin overcoming the turns and managing to beat the crime boss. But then why did he disappear and the cars turn into scrap after that? I'm assuming Pablo died and that was his ghost, but... the cars were also dead? Huh? The whole thing kind of came out of nowhere and was never explained or remarked on for the rest of the episode. That's why this episode loses some points with me, because much like some of the Part II episodes, this was baffling. What exactly is real here? It's almost like the show got tired of the episode's first premise.

But while it was a mess, it was a fairly enjoyable mess. I loved the tune they used during the race, which you could often hear in Part II. The newer version of it is excellent and really pushed that scene over the top (letting you forgive some of the dodgy cg work).

Next week's episode looks to be Goemon-centered. I wonder if it'll be another bloodbath. Actually, it looks like a romantic comedy from the preview. So I just hope it's a bloodbath. Nah, Goemon should get him some. 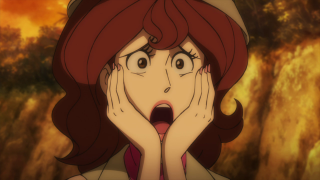 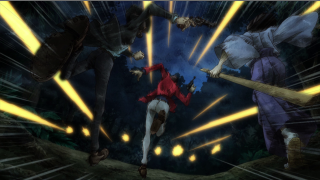