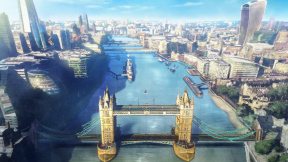 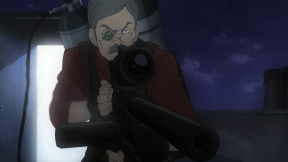 Synopsis: Lupin and Jigen are back in London, looking to piece together the mystery of the Raven group. But while spying on Sherlock Holmes, Lupin encounters Inspector Zenigata. The man from the ICPO wants to know what happened to Holmes' partner, Watson, and what Lily witnessed. But suddenly the two are on the run from an assassin, ducking for cover in a cemetary. How can the duo take down this threat? It looks like Lupin and Pops are in grave danger! 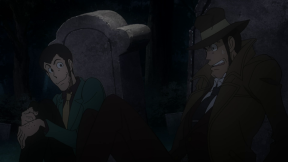 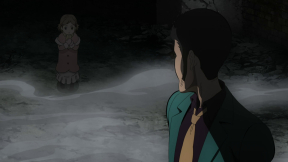 I liked this episode. But because of something that happens at the end of this episode, some people dislike it. They feel like it was a bait-and-switch, sort of like how I felt about the situation in the last episode. I can sort of see where they're coming from, but it doesn't spoil the episode for me.

What did kind of bother me was that the contention between Lupin and Holmes seemed manafactured this whole time, since they both basically knew Lupin didn't kill Watson. Maybe Holmes wanted to be sure, since he wasn't there when Watson was shot, and only came in shortly after, but if he's a great detective, he could tell it wasn't Lupin to begin with, so why did he have to have Lupin remind him of it in this episode? Why was Holmes so angry at Lupin for to begin with if he could tell he didn't kill Watson?

Well, I assume it's because he simply didn't want Lily to relive the moment of her father's death. Lupin may not have killed Watson, but his image is what would remind Lily of the incident and, in Holmes' estimation, traumatize her needlessly. That, and the Raven organization might hunt her down. It's Lupin's attitude, however, that Lily should be reminded of what happened so that she can come to grips with it. I like that little bit of personality we see of Lupin in this episode where he's looking out for Lily's best interests. Though, that might also be because he doesn't want interference in chasing the Raven's treasure.

It seems as though there's a new player in the game. The assassin reveals that he's not working for Raven, but somebody called "The Professor", who's going to change the whole landscape of crime. I can only suspect that this will be Professor Moriarty, Sherlock Holmes' literary enemy. So now we have Lupin (and company), Holmes, Zenigata, Lestrade, Albert, the Raven organization, and "The Professor" in this web of conflict. It's getting more complicated.

But the big issue Zenigata fans have with this episode is that the entire time Lupin is talking with "Zenigata" and they're taking on the assassin, he's really interacting with Holmes disguised as Pops. Pops himself is passed out drunk in a bar elsewhere. Some fans consider this disrespectful, as Zenigata can be pretty daring at times himself, plus Pops has no reason to know who killed Watson. I can understand the feeling of betrayal, but I liked that Holmes is also a master of disguise.

My only real problem is, all this "Did Lupin kill Watson? What's the mystery behind what happened between Holmes and Lupin?" stuff was resolved so quickly. Otherwise, I quite enjoyed the episode. It was certainly a huge step up from the previous one, that's for sure. 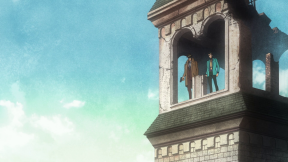 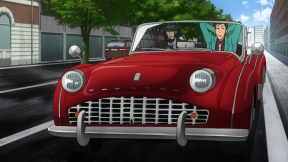