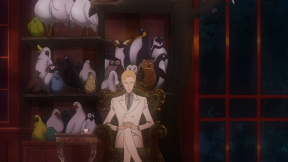 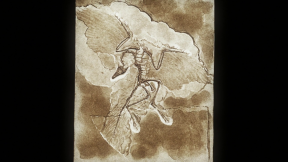 Synopsis: A mysterious client contracts Lupin and Fujiko to steal an Archaeopteryx fossil from the British Museum, but something about the job is strange. Is there a dark secret to this heist? Heaven knows it's a devil of a challenge! 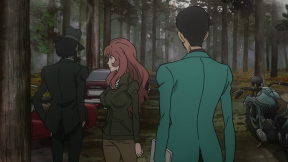 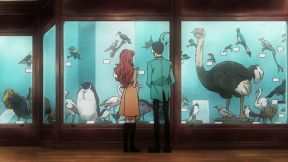 What a bunch of Touched By an Angel, Young Earth Creationist, anti-science bullshit.

First of all, I'm not overly fond of supernatural elements in my Lupin III stories. So this episode has a strike against it for the angel bullshit. Even though Lupin III has what I would call an "exaggerated reality" where things like a swordsman that can cut through bullets and perfect masks can exist, I don't want to see a lot of ghosts, magic, and things of that nature, because in most of the best Lupin features there's a certain sense of basic groundedness. What are we to believe after this episode, that the one true God and Judeao-Christian scripture is the reality of the Lupin universe? As a skeptic of religious matters, I find it annoying.

Then there's the strain of anti-science in this episode, casting doubt on the discover of the Archaeoptrix, basically implying that it was suspicious that two such fossils would be found shortly after Darwin published On the Origin of Species (By Means of Natural Selection) and placed the blame on Karl Haberlein, a private collector, for the "hoax" of the "fake" find. No, actually, the fossil found was that of Lucifer Morningstar, and it was kept secret at the British Museum for some unknown reason. This is the kind of thing that Kent Hovind or Ken Ham probably believes. Putting the work of groundbreaking scientists in the light of fakery is an insult to the intelligent mind.

But then PSYCH YOUR MIND, because the whole incident with Fujiko discovering the fossil was... what, a vision? A dream? And she rejects archangel Michael's offer at the end of the episode to steal the fossil for God. What does God need with a starship? I mean, what does God need with a fossil? Why can't the Almighty just summon the fossil from the museum? Or have Michael do it himself? Why does he need thieves to steal it? Sorry, but this episode is complete nonsense.

What a pile of shit. Mamoru Oshii should be ashamed of himself. 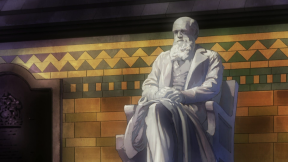 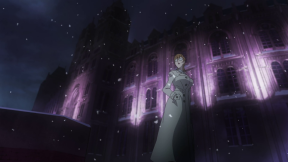