Episode 11, "The Truth and the Raven" 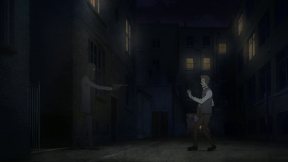 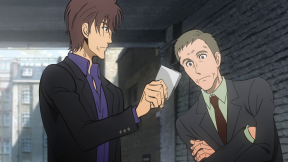 Synopsis: When a real estate developer is assassinated by the Raven organization, Sherlock Holmes gets a tip that he was last seen with Fujiko Mine, signalling that the Lupin gang are back in London. It seems that the murder victim was targeted by the same killer who took out Lord Faulkner and John Watson. Holmes puts out a bounty on the missing piece of the poster Lupin attempted to steal to keep him busy. All parties- Holmes, Lily Watson, Lupin, and Inspector Zenigata- converge on Faulkner's Black Drawing Room to unveil the hidden treasure! 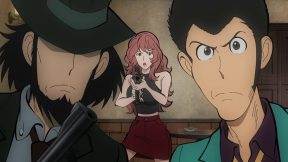 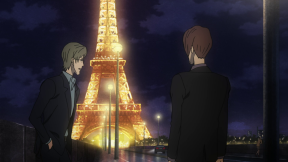 This episode was decent (certainly a step up from the previous one), but I felt like it was a lot of set up for the end of the story arc, and as such, it didn't really satisfy me that much. Everything will hinge on how this storyline ends.

I have a hard time believing that this supposed secret organization the Raven uses the same one assassin to take out all its targets. It seems like an organization with such a deep connection to England's government would have the resources to send some different killers with different methods, rather than the same one guy who can be linked to all the deaths over the years. And anyway, how could they link Faulkner's death to this guy, since he was blown up in an explosion in Scotland Yard, not shot, like Horatio and Alex Jenkinson?

The other element of this episode that bothers me is all the scenes of Lupin and the gang being targeted by bounty hunters looking to collect Holmes' reward. This could have been an episode in itself, but just came across as rushed filler material in between plot beats. Especially since they brought in Goemon again to do almost nothing. It seems like Lupin's group has been vestigial for most of this series.

There are two bits I really liked in this episode, though. One was Holmes' faking of being ill so that he could return Lily to near the scene of her father's death. It first seems like kind of a nasty trick for him to pull, but he's trying to get to her to remember so that he can uncover the mystery of her father's death and get her to move on from it, just as he's trying to.

The second scene I enjoyed was Lupin and Holmes' deductions in the Black Drawing room, figuring out that the poster itself wasn't the key to the hidden treasure, but the room and how it reacted to sunlight at a certain time of day and season. It showed that both men are sharp. I also like how Holmes included Lily in his deductions.

But apparently the room activated some kind of explosive device. We'll see how Lupin, Lily, and Holmes survive in the next episode. 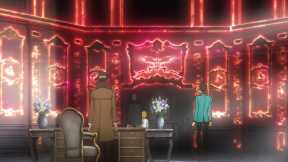 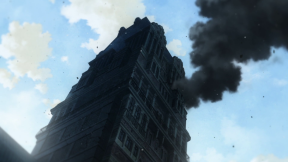