Episode 13, "An Invitation From the Past" 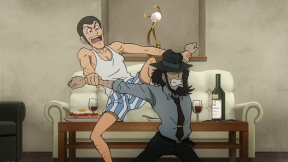 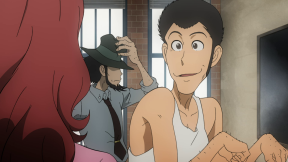 Synopsis: A collection of treasures from around the world are going up for auction, and Lupin is determined to steal them, and in particular, a mysterious red gem that was taken from his childhood home. He arranges a spectacular illusion to distract the patrons of the auction, but the plan is foiled when a group of women thieves make off with the loot before he can. Lupin scrambles to regain what was lost years earlier. 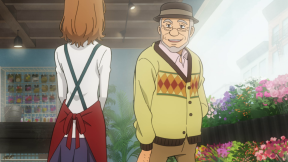 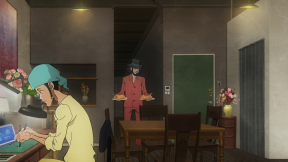 Here we are at the beginning of a new story arc and it looks like it'll be an interesting one.

It's always nice to see Lupin and the gang during their downtime, and this episode has plenty of domestic Lupin and Jigen. We see that they decide who cooks by playing cards, which Lupin always wins, so Jigen has to provide. This is fine, though, because Jigen is a good cook who's improving thanks to the internet. Lupin chalks it up to having too much time on their hands, but fortunately a new opportunity presents itself in the form of the auction. But it's good to get a look at Lupin preparing for the next heist in the privacy and comfort of their hideout, even working into the night while in pajamas.

We're introduced to the mystery of the red gem stolen from the Lupin family many years ago by the only person who was ever able to steal from them: Tomoe, Lupin's own mother. Lupin assumed that she was dead long ago, but wants to get the gem back to regain the family's honor. But the troupe of lady looters that horn in on his plan may have a connection to Tomoe. But I thought that "the Third" was said to be a title passed along in Part V, so what is the deal with Lupin's past? Was the mansion Lupin living in really the home of the original Arsene Lupin? I guess we'll have to find out another time.

I wonder what kind of technology Lupin has access to that allows him to make tiny little hologram-projecting robot bugs? Especially since the drones are controlled by a handheld switch which doesn't look like it's complicated enough to control several drones going in different directions all at once. Are they preprogrammed to do so? Maybe it's best not to overthink this. The technology-based illusion thing, though, is a bit of a stretch, even for Lupin.

I liked the little interactions between the disguised Lupin and the flower girl, Mattea. He was using her to get an in at the auction house, but he seemed to genuinely appreciate her passion for her work, and thought enough of her to swoop down and save her instead of the gem as he was outrunning the band of women thieves. I liked how Lupin kept buying more and more flowers and how they ended up back at his hideout (leading to a funny exchange between him and Jigen). I don't know how she might factor into future episodes, now that her place in the scheme is over, but I wouldn't mind seeing her again.

Apparently we're going from New York City down to Mexico in the next episode, but it's a continuation of this storyline. I can't wait to see what lies in store next. 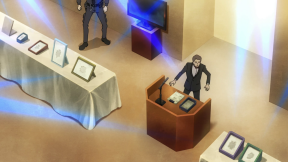 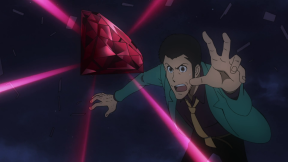