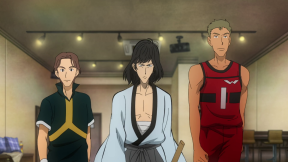 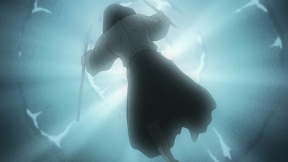 Synopsis: Fashion designer Gabby becomes a target of Lupin and Fujiko who want her new clothing collection. But strangely enough, Gabby has hired Goemon to model for her. She's quite the taskmaster when it comes to her model's movements, too, but Goemon is determined to get things right. Will Lupin and Fujiko be able to steal Gabby's outfits with Goemon present? Strike a pose, it's a stylish Lupin caper! 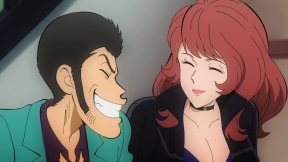 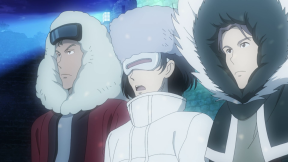 This was a weird one.

We definitely needed a Goemon episode in this series, because he's been passed over so often, but I wasn't expecting an episode in which our favorite overpowered anachronism models for a fashion line. I suppose if you needed a character to do that, Goemon is the funniest to do it with, given his fish-out-of-water nature. But really, fashion modeling? You couldn't give him a little more to work with? He doesn't even have a real battle in this episode, except against his own awkwardness.

There isn't even that much to say about this episode. Goemon does a favor for a woman who fished him out of the water when he fell into it while training, Lupin and Fujiko are looking to get ahold of the latest fashions, and Jigen isn't even in this episode. Zenigata is, but barely. I mean, we don't need every character in every episode, but there's so little to this episode, it wouldn't have hurt to add another dimension or two to it.

I have to admit, though, that it wasn't a bad episode. I enjoyed seeing Goemon applying his rigorous training regimine to modeling. And the fashion show itself was funny, with Lupin intruding and styling with Goemon. But, again, it's a pretty shallow episode, even if it's pretty decent. I only hope the next episode gives me more to work with, review-wise. 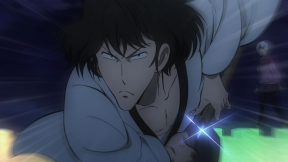 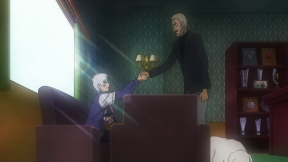