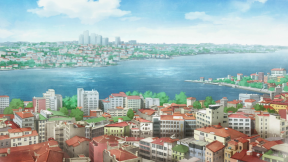 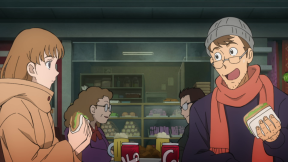 Synopsis: Lupin travels to the Republic of Cotornica to meet a congresswoman named Hazel. When he gets there, he encounters the flower girl, Mattea, who's travelling. Lupin breaks into Hazel's apartment, where she reveals to Lupin that her tudor was Tomoe, Lupin's "mother". Hazel is also the subject of blackmail using deepfakes because of her position on foreign policy regarding rare earth metals. Lupin helps her deal with her blackmailers and leaves, but when Inspector Zenigata pays her a visit, he finds himself in trouble. Is ol' Pops in real trouble? It's an episode of intrigue! 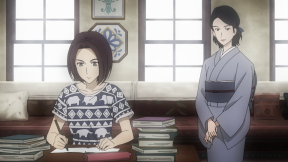 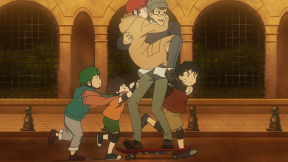 We continue the Tomoe storyline again with Lupin getting a clue as to some of his mentor's other activities since she taught him.

Lupin's friendship with Mattea is adorable, with him pretending to be her big brother, chatting with Zenigata's assistants in disguise, doing a little skateboarding with her in his arms, and just generally being friendly without actually flirting with her. Usually a cute girl like Mattea would be a subject to his advances, but I think he feels like she's an innocent young woman to protect, like Clarisse in Castle of Cagliostro. Maybe we'll find out next time exactly why she just happened to pick Cotornica to travel to, because it's a little suspicious she should end up in the exact place Lupin and the gang went to.

Hazel was apparently one of Tomoe's students, having first met her when she (Hazel) was in high school. Tomoe discerned that Hazel was a natural in political matters, so she brought in several other tutors to mold her into somebody perfect for public service. It's interesting, because Tomoe taught Lupin and Mercedes about the thieving trade, not politics. It seems like she might not (just) be a master thief, but someone who is able to bring out the full potential of a student to whatever he or she is best at.

But Hazel also reveals that Tomoe claimed to have an actual child and kept a box with her she said was important. Could it have contained the red jewel that Lupin just recently retrieved? And if that's the case, was Tomoe more than just a teacher to Lupin, or is this a red herring?

Whatever the case is, things don't look good for Cotornica's passionate congresswoman, because when Inspector Zenigata arrives at her apartment to question her, he finds a bloodied Hazel, likely dead. Things aren't going well for Pops, either, because the country's own authorities appear and assume he was the culprit. All of this probably has to do with the people that were trying to blackmail Hazel and the rare earth metals of the country. I suspect that other representative, Selim, who's a shady looking guy.

Whatever the case is, this was a good episode for one that didn't directly involve any caper or much intrigue. I'm looking forward to seeing where this goes next time. Maybe we'll learn a little more about Lupin's "mother". 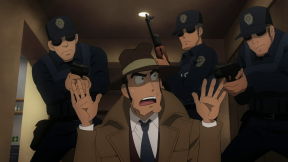