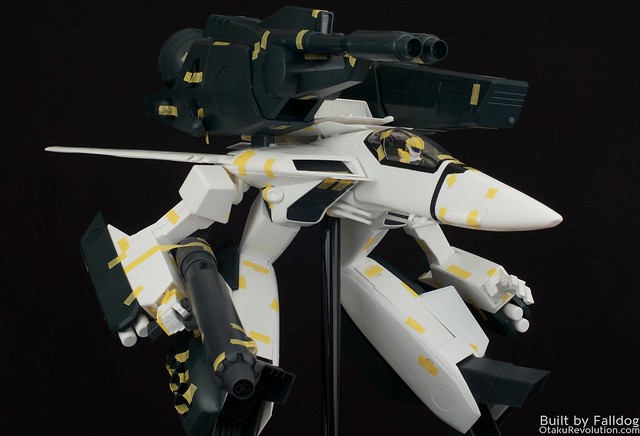 In simpler language, this is a 1/20 scale Macross VF-1 kit from Max Factory. It comes with the Super Strike package and is limited to Gerwalk mode. No transforming here. Oh, and it's fucking huge. It's about 20" tall, amost 28" deep, and up to 28.5" wide when the wings are extended.

This is a dry fit review, as in everything is put together without glue. And, subsequently, held together with tape. Now unlike Mecanicore's Deep Striker kit, the tape isn't a bad thing. The kit is designed to require glue to hold everything in place. It's in the manual over and over again. Thus I can't really complain about bits being loose. I do have plans to eventually glue and paint this kit... but the goal is to -dramatic drum roll please- wire her up with custom LEDs. Seeing as I've never done that before, I'm going to get a practice kit or two under my belt first. But I digress.

What's in the box?

The box, as you can imagine, is quite huge. I was this close to having to unbox it down at the post office. 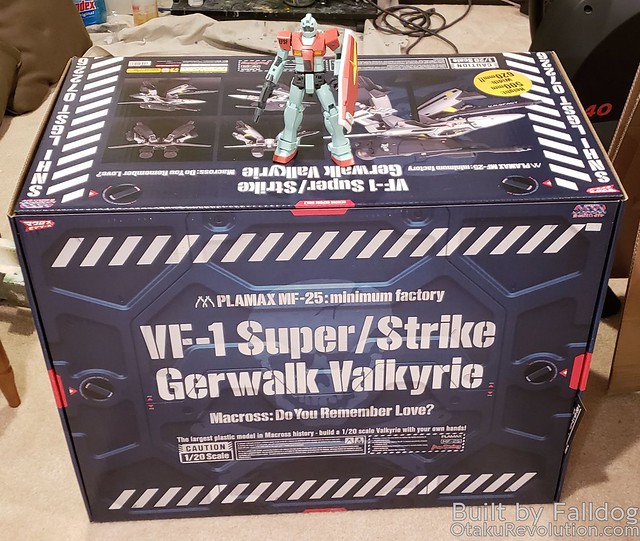 Inside are only about 21 runners, most massive in size. Each, of the giant runners, apparently individually hand bagged, alone dwarf a MG kit.

The majority of this kit is either white, black, or a dark gray. There's some yellow and blue for the 1/20 scale Roy Fokker but the rest is really bland. Every bit of colour you see in the publicity photos has been added after the fact. And, if we were to follow the instructions, those markings would be done with the three large sheets of stickers included.

At first I thought, "stickers, what the fuck, something this expensive should come with decals," and for the most part still feel that way. Realistically, stickers are the only practical way to get detail marking this large. Big decals for the black bars or tail markings would rip and otherwise be a mess to keep together. What they should've done is include some decals along with the stickers. Just a couple UN Spacy and crossbones decals, maybe some of the warning markings too, oh and the lettering. That way someone painting the kit can mask off the big details and apply the smaller bits on top. I haven't seen any indication that Max Factory is going to release decals, so I might have to get third party ones made up just for this kit.

The manual is large, full colour, and easy to read. There was an extra sheet detailing some revisions to the manual, but for the most part the only meaningful difference I could tell was to put a pair of leg pieces on after attaching the legs to the fuselage. 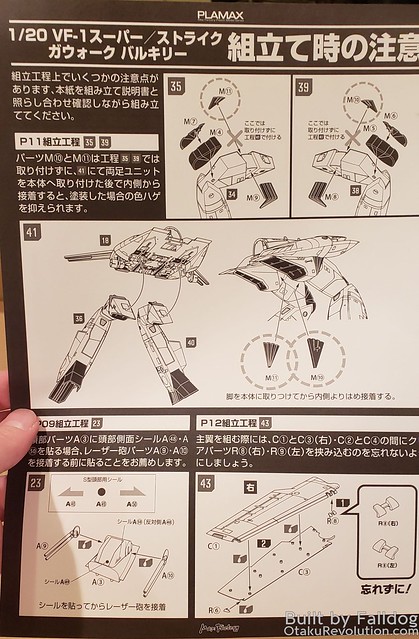 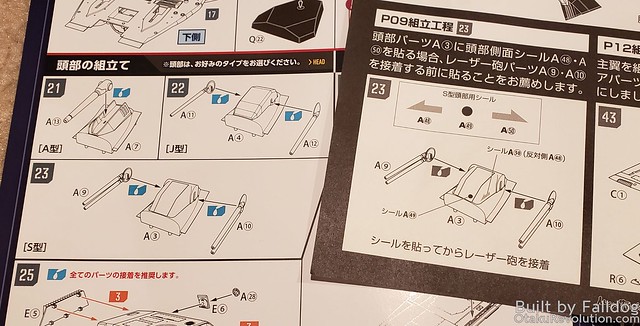 I haven't a clue what they're indicating with the step 23 changes. The part numbers are the same and the same sticker numbering is provided earlier in the guide...

Because the pieces are so large the piece-to-runner sprues are massive. I didn't want to ruin my God Hands so I used a heavy set of cutters which definitely didn't help with limiting nub marks. In some areas the piece is so close to the runner that I used a hobby saw to remove them. There's some flashing issues here and there, but very little on the pieces themselves. Many pieces show the CNC markings but it's nothing that won't be lost under paint. Mold punch points are visible here and there, as well as some pretty awful seam lines as part of the construction. 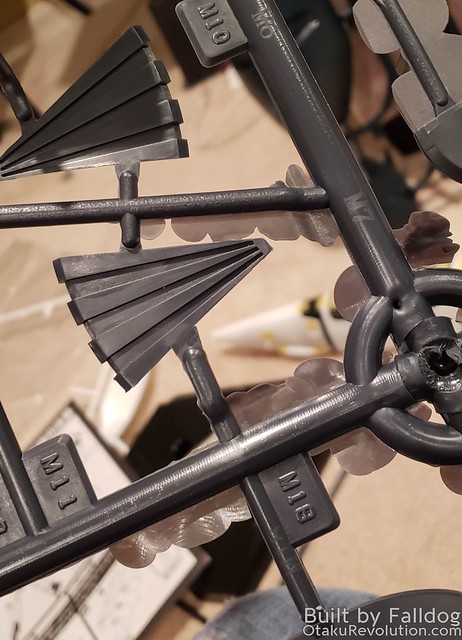 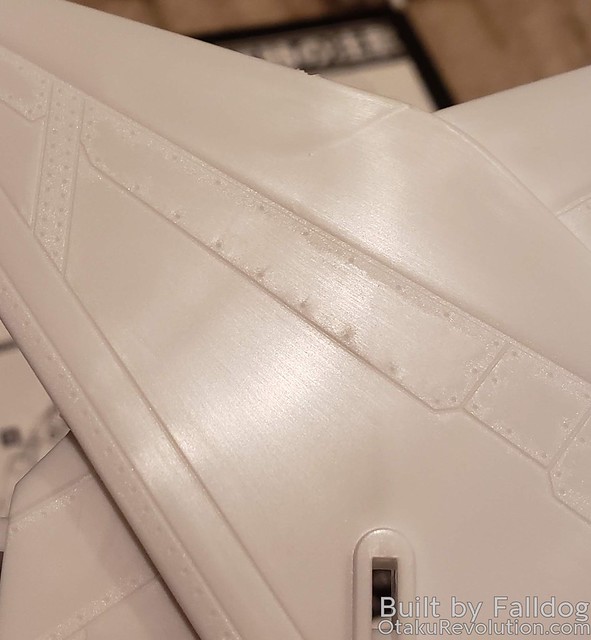 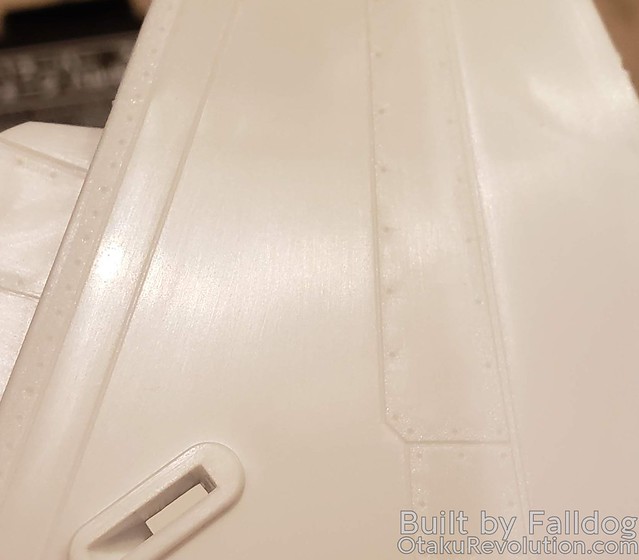 Last but not least, there is a very sturdy base with a metal tube to hold up the VF-1. The kit isn't fully secured to the stand, such that it will spin around and both the connector piece, the tube, and the base will separate depending on how you pick it up. Not a big deal, I was able to pick up the kit by the base and move it from my work space to my Gundam room/photo table without issue.

The kit went together pretty easily. (Well, other than having to tape things up but that's on me.) There's one piece that didn't fit, the ejection seat pull (I think), didn't fit in the designated hole. There are two sets of controls in the cockpit with one molded directly into the pilot's hands and the second free in case you wanted to display without the pilot. The cockpit is pretty bland and definitely needs some paint to spice things up. Unfortunately there's no mechanism to display with the cockpit open. 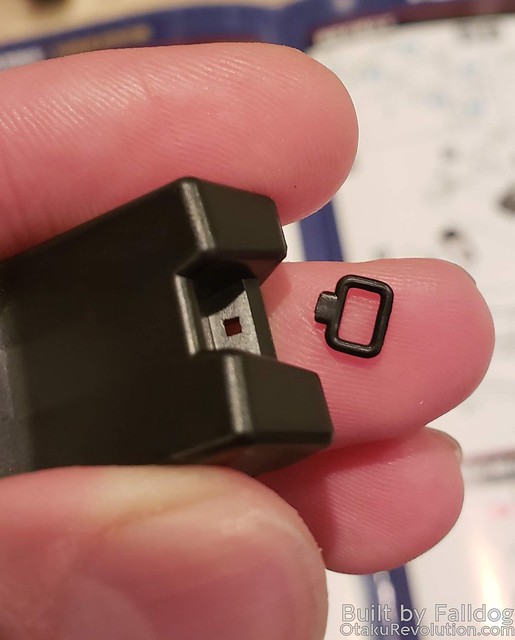 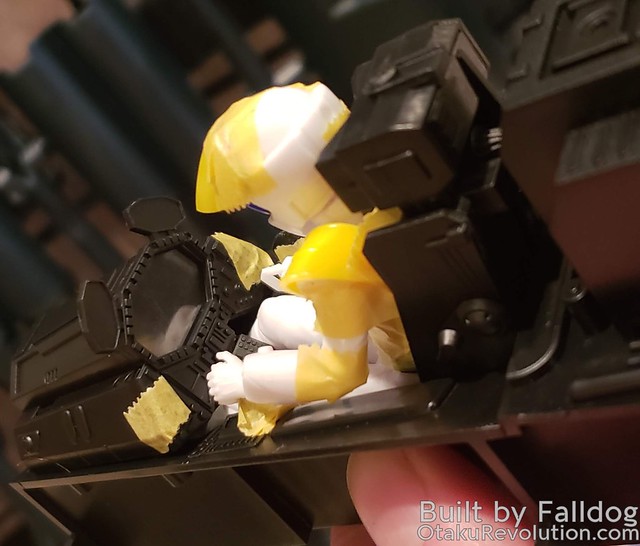 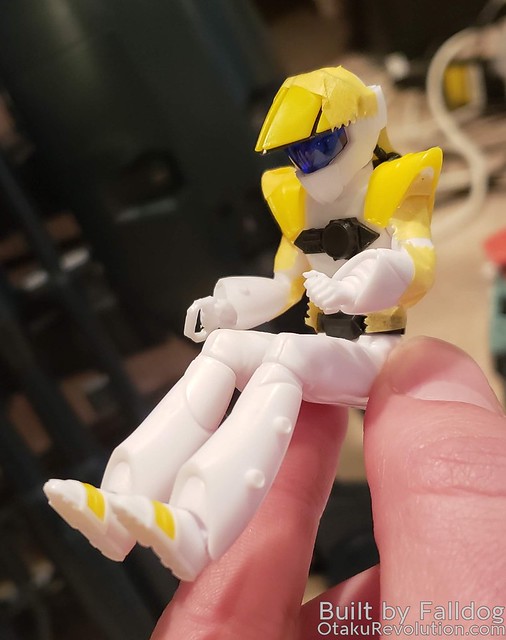 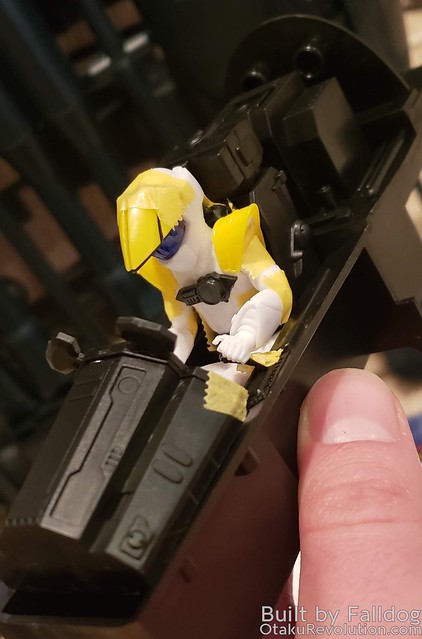 The wings slide over interal supports which is something I've seen on F-14 kits. Screws hold the supports in place but don't provide any resistance so the wings move back and forward easily. 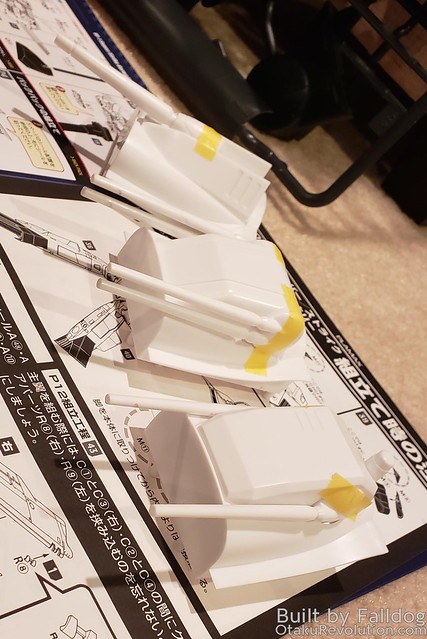 When it comes to molded details, some parts of the kit are heavy and others a wasteland by comparison. For example, the traditional plane bits have tons of the kind of detail you expect to see on a miliary jet of the era. Where some other parts, such as the upper arms, lack any detail whatsoever.

There are three head options available, the VF-1, VF-1A, and VF-1J. There's no actual head per say, just the top and barrels protruding from the underside.

In terms of armorment you've got the giant gunpod (along with a random hole in the right index finger) and a choice of super pack configurations. In front of the top mounted boosters you can either put the two missle pods (my favorite look) or one missle pod and one hefty cannon. 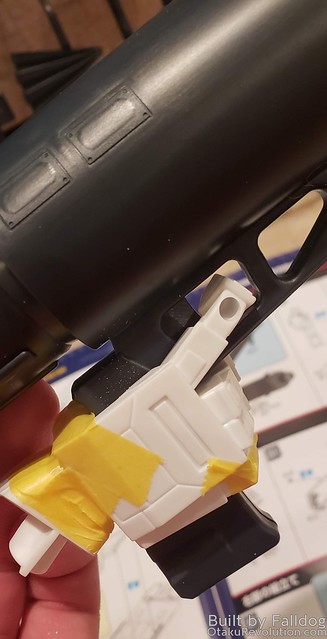 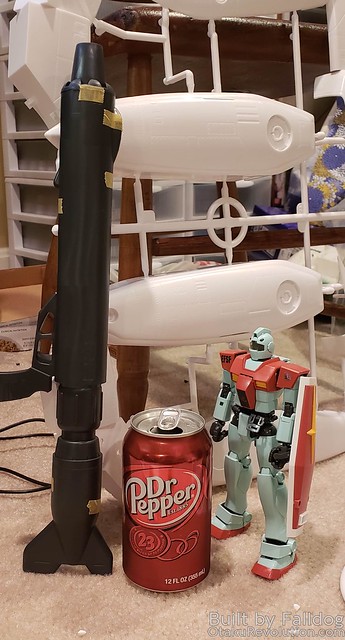 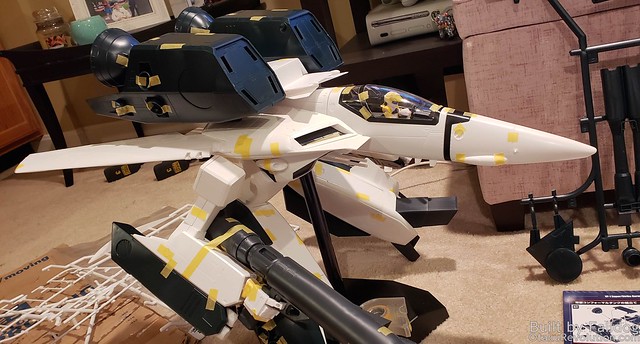 One thing that needs to be mentioned, in part because I haven't seen it anywhere else, is how the kit is designed to break down. You have the main fuselage, the cockpit section, the super back pieces, the arms, legs, and gun. Each of those, if not glued into place (and you aren't really instructed to) can come apart later on for easy storage and transportation. A huge benefit with a kit this size.

Another thing I need to bring up are the extra parts that come with the kit. There's a whole bunch that are grayed out in the parts list. Some of these pieces are to fill in holes if you wanted to build it without the super set. Very cool, but apparently not documented anywhere. There are also extra pieces that would seem to only make sense if there was a way to build this as a fighter mode variant (like the tires --- there are spots to install landing gear, though none are included). Now Max Factory has teased images of a 1/20 VF-1 in fighter form. From the looks of it, swapping out a few runners is all they would need to do. Lastly there are two big bits that are a lot like the arm mounted launchers but longer. Maybe parts of a fighter mode variant as well?

Have some more photos 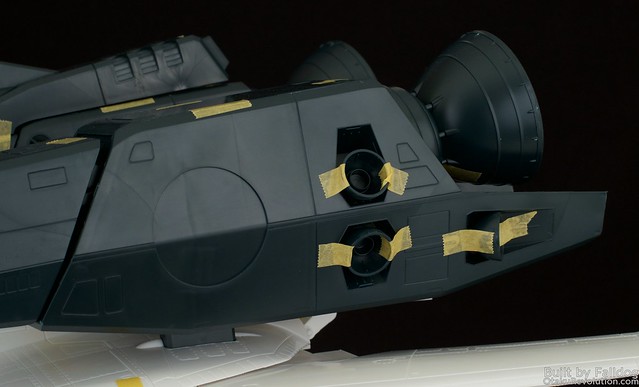 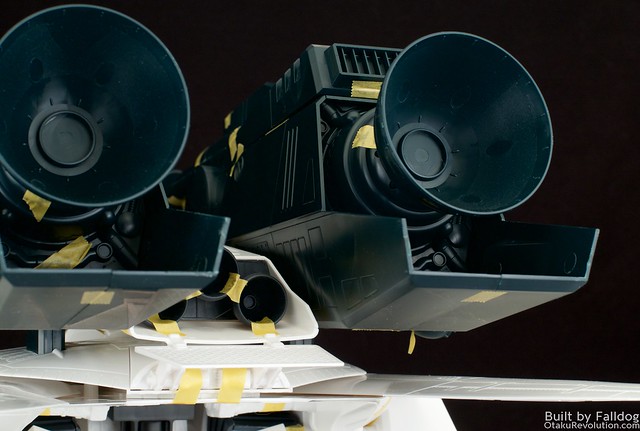 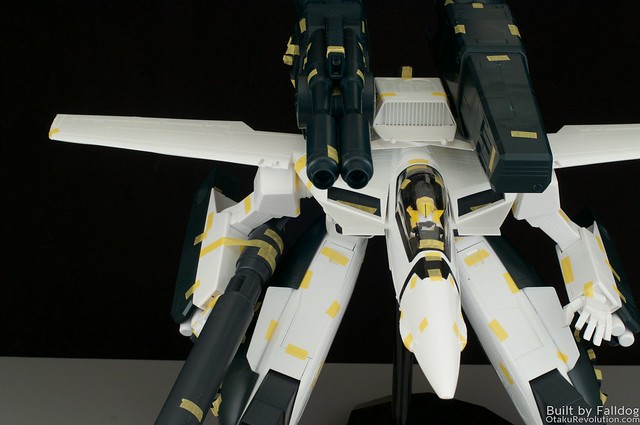 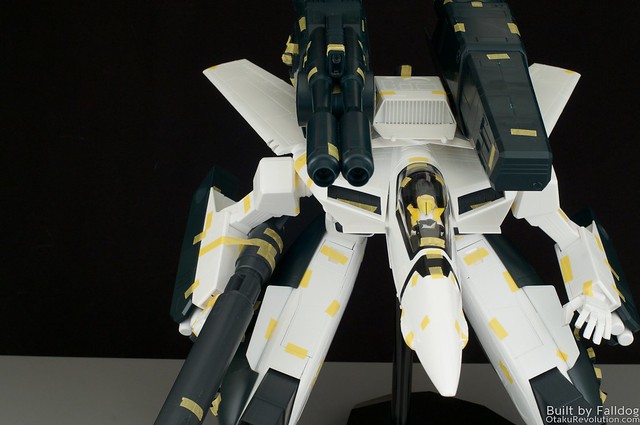 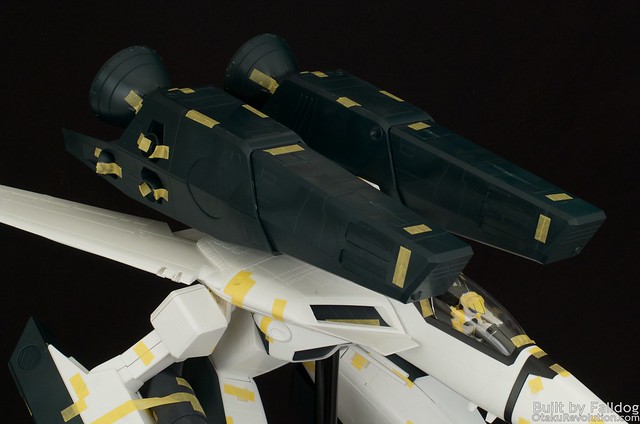 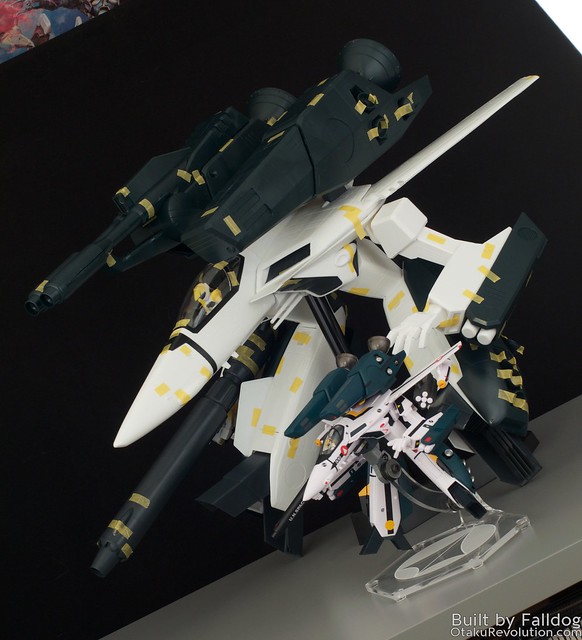 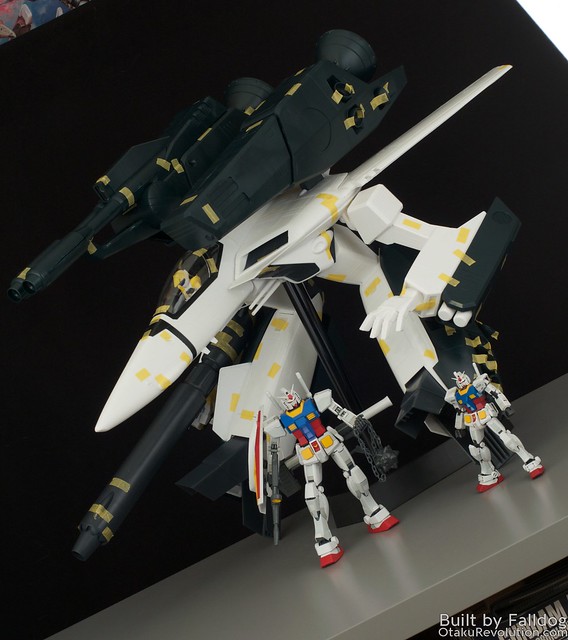 Should you buy this kit? If you're even asking the answer is no. If you rushed out and got one as soon it was announced, then yes. It's a good, needs some work, and a lot of space to display. Not for your everyday Macross fan. You might be too late, Hobbylink Japan says this kit is out of production and won't be back again.