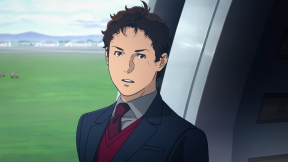 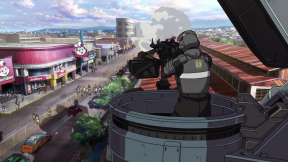 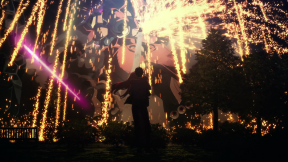 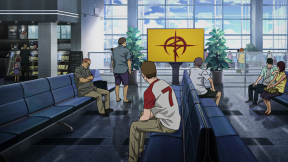 I have a problem, folks. Well, I have a lot of problems, but I have a specific problem relevant to reviewing this title, as well. The thing is, I'm in too deep. I'm so entrenched in Universal Century lore, I no longer know what it is that people would have to do to catch up to me. This isn't bragging, it's just a fact: I know my Universal Century Gundam. But I don't know how to discuss Gundam to a general audience. I always assume other people have been following along at least on the basics, when many people haven't. Not everybody is a shut-in depressive otaku with a lot of time on their hands. I've been speaking the language of Gundam for so long, I forget what it's like to still be learning to conjugate the verbs.

So bear with me.

Mobile Suit Gundam: Hathaway is based on the first of three novels called Hathaway's Flash, which were released from 1989 to 1990. They were written by Gundam creator Yoshiyuki Tomino, conceiving it as a sequel to the novel Beltorchika's Children, a retelling of the movie Char's Counterattack. As you might imagine, there's a bit to untangle there. Events in Beltorchika's Children unfolded with a few changes from Char's Counterattack, notably the death of Quess Paraya, and Hathaway Noa's part in it. Whether or not this difference from the movie will reflect in this movie trilogy is unknown to me.

What I do know is that this Hathway film, while based on Tomino's first novel in the series, was neither scripted nor directed by him, having little of Tomino's stylistic flourishes, but retaining much of his spirit. The dialogue can be a little hamfisted, but you can tell where it was likely polished a bit by the scriptwriter, Yasuyuki Muto (Mobile Suit Gundam UC, Deadman Wonderland), and the direction by Shūkō Murase seems competent enough. I've read that Tomino, when asked about how he felt about his novels being turned into movies, reacted with his usual Tomino shrug, saying that he had forgotten the story altogether. Maybe it was best that he didn't direct, though I don't doubt he would have done a decent job at the very least.

As a sequel (of sorts) to Char's Counterattack, we see how a natural progression flows. While Char is gone, the concern for Earth's dwindling assets and the continued opulence and frivolity lived by the Federation elites remains. Hathaway, like the Red Comet, wants humans to live in space, to give the planet a rest. And he's waging literal class warfare to assure that those who'd get in the way of his goals are eliminated. He's become an extremist, though an ambivalent and reticent one, still with a young man's gentleness about his personal character. The role of the leader of Mafty actually seems out of character for such a man, who hardly appears to be a radical on the surface. His organization has broad support from the people at the beginning of the feature, but by the end some are beginning to balk as the government seethes at Mafty's victory. But to Hathaway, if he doesn't carry out his mission, it will mean that all those who had died in Char's Rebellion would have perished in vain.

Gigi Andalucia is another in a long line of strange girls and young women, in the mold of Lalah Sune, Sara Zabiarov, Elpeo Ple, and Quess Paraya. With Gigi, however, it never seems entirely clear whether or not she's a Newtype. In fact, I don't think the term "Newtype" is mentioned more than once in the film, when Hathaway rejects the possibility he is one. But the one who mentioned it was Gigi, after all, and she has a strange level of perception. She can be sensitive at times, but is usually self-possessed and not bothered with who she is. The way she effortlessly dances around potential romances with Hathaway and Kenneth reveals a playful, spritely quality. The most important thing is that she pegs Hathaway as Mafty soon after meeting him. If it's intuition, it's certainly amazing, if not extremely convenient for the plot. I'm wondering whether she'll end up a pilot, too, maybe a member of Mafty or a weapon for the Federation, in the near future.

The mobile suit action in the movie is a little difficult to comment on. Most of it happens in the dark, at night, and they really go for verisimilitude, because you can barely see a damn thing. From what I could see, the action was all right, nothing mind blowing, but there were some moments of excitement, like any time a beam saber was out, or when Hathaway broke free of the capsule containing the Xi Gundam (how do you pronounce that again? Z? Eks-e?). Most of the rest of the action was just people running for their lives during the attack on the hotels, or the beginning scene in the passenger aircraft. I did enjoy how Hathaway kept intentionally missing hooking up with his confederates during it to stay with Gigi. The CG isn't great, but it doesn't really ruin the experience. It's probably better utilized here than in The Origin. The mobile suit designs themselves are decent, but maybe a little too busy and samey (I dare you to tell me the difference between the Xi and the Penelope).

A lot of work was put into the settings, the environments, of the movie. A lot of establishing shots of Davao (in the Philippines) are rich in detail and color. You can feel the lived-in, natural quality of the places the characters go to (when they're not chilling in offices and hotel rooms). In fact, the second film is currently held up in production because of difficulties getting scouting trips going to Australia (where the Federation bigwigs are planning to convene). Let's hope the Sunrise staff get that all worked out soon, I want to see the next movie.

Overall, I'd say that Hathaway is a good film, but not an instant classic by any measure. I still prefer the quirkiness and larger scale of Char's Counterattack, or the comparably smaller in scope but still ambitious Gundam UC OVA. If I could actually see more of the movie, it might have moved up a few notches, but it must be Vin Deisel in here because it's Pitch Black, folks. As for the characterization and plot, all serviceable, but nothing that floored me. I'm interested in seeing where the story takes us (aside from Australia), and whether Hathaway will be able to make a difference. I'm interested in seeing more of Kenneth Sleg and how far he's willing to go to hunt down Mafty. And I'm also looking to see if Lane Aim lives up to his potential. Or if these movies will live up to theirs. 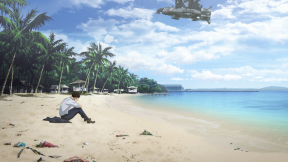 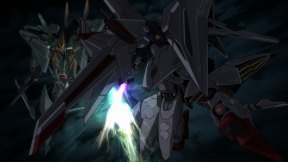