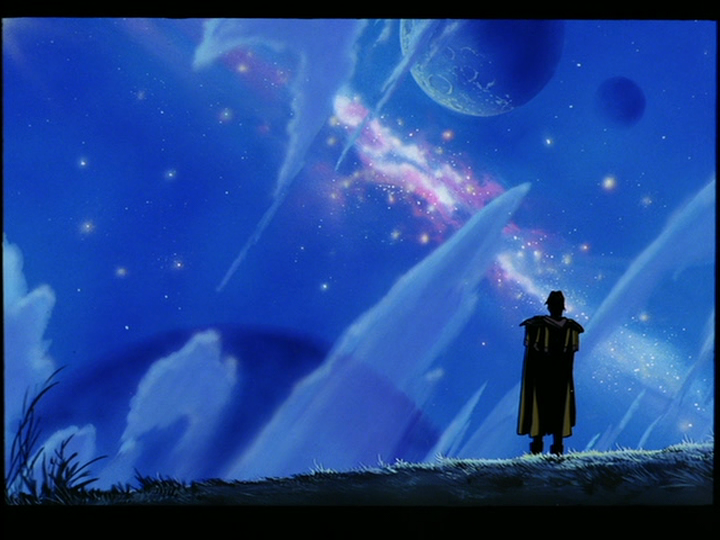 In the fight for gender equality, I believe women have a more pressing group to compete towards than men: The waifu. You may wonder: “Yo, aren’t waifus women? What makes them different and treated better?” Well, it’s a matter of this.

When you stick a woman in a refrigerator, chances are she’s dead. When you stick a waifu in one, it’s for the purpose of waking her up again for some story element a bit of a ways away. The argument has an issue however in that River Tam was NOT a waifu, nor should be considered one. However, that is another story for another day (That will never come). Let’s get back to Outlaw Star.

After a rather striking moment to cliffhang on, the show begins to build up its universe. If it isn’t Jet Black himself, Beau Billingslea, beginning his pre-title narration (a series staple from here on) waxing about how a boy has a right to dream, it’s the short but sweet flashbacks to Gene’s past. Turns out all that melancholy Gene had in the previous episode is filled with some levity and tragedy. Sure it is the age old tale of parental figure launching small child away from doomed ship, but given the moments of vulnerability Gene showcased last episode, it is welcome and thankfully well-executed. It also makes for great humour and insight as Jim takes the piss out of Gene for getting sick when heading to space. That boy can’t go after Gene when it comes to the latter’s promiscuous propensities in the ways of the flesh, but when it comes to discomfort in space? Jim brings out the cherry-busting lingo and uses it on Gene without any sense of remorse (it also helps he doesn’t seem to KNOW Gene’s past).

For a kid who has yet to have hair on his balls, he sure knows how to bust em. Shows the ‘straight man’ of the show can be mischievous.

While he, Gene, and Hilda get a lot of expansion in character development, the one left out is Melfina. It’s a bit unfortunate, since when we first meet her, after some cryptic statements, she breaks down, wonders why she was born, then spends the rest of the episode looking uncertain and distant. Maybe it’s a fair trade-off when it could’ve been her blubbering existential angst, but it does seem offputting she is left as an observer when the world is unfolded for Gene and Jim through plot action and exposition by new characters. To be sure, it seems offscreen she and Jim bonded, and the moments where Jim hangs out with her while she gets a better set of clothes are at least there to show she isn’t forgotten but is treated as a person. We also get glimpses at how despite her problems, she is at least very sweet towards Jim, if a bit naïve. Kinda boilerplate waifish waifu personality at this juncture, even if I know there’s more to her based on my previous viewings. However it is interesting how she is not the crux of the episode compared to Hilda’s personal quest to find a ship. Turns out she isn’t so much Hilda’s goal, but part of it. If such, I’m curious to rediscover how Hilda treats her later in the series.

However, that is neither here nor there, since just as when things are about to get good, we end with an even stranger cliffhanger than the last one. I mean it is one thing to find a naked girl in a suitcase, it’s another when nondescript goons who picked a fight with Hilda and Gene a few scenes ago, break into a hotel to try and kill them with cattle prods. Then, JUST when our heroes are about to kill a mech with a mean looking blowtorch, BOOM “TO BE CONTINUED!”

What a way to blue ball, show.