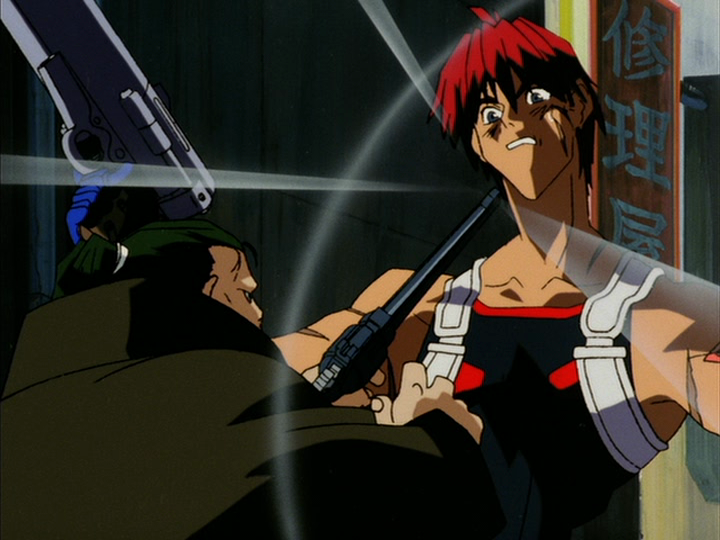 Ah, this is the episode with the scene bookending one of the original Toonami’s Outlaw Star promos back in the day. Personally, I like this tagline better than the reused “Time to roll the dice.” However, given my favourite tagline would not fit TOO much in 2018 than it would in 2000-ish, I guess it will have to do.

Even though, when one thinks about it, “time to roll the dice” wouldn’t make sense given how the original edit took great strides to censor out any allusion to gambling. I guess Gene and friends play some SD&SD (Space Dungeons & Space Dragons) inbetween jobs, which explains the use of dice.

Either way, this is the best episode as of yet for the series. In fact… it’s the best episode since like… Episode 1 or Episode 4. This is not to say the episodes inbetween were bad, but that first episode is one with an indelible first impression, and I find what made it work back then reappear in this episode. It is not merely the lore and mystery surrounding the new threat of the Anten Seven, but it also brings back a Gene we haven’t seen since he acquired the Outlaw Star. Y’know the one? The one who, while being a free-spirited rogue, has a bit of an existential crisis on his place in the universe and whether or not he is able to GO to said place, among others. I’ve mentioned many times his lackadaisical approach to jobs, yet I notice something. In Episode 1, Jim was not as shrill on Gene as he is in current episodes. He’s concerned to be sure, but life on Sentinel was mundane and enough to keep a roof over their heads. Now that Starwind and Hawking Enterprises is in Heifong, a more expensive locale, business must boom.

Yet... Gene despite everything still maintains that easygoing mode, but he lost his existential crisis. He acts as if there is not anything worth pursuing, and if there is, it will come. Granted a lot of his work may involve a chance of him getting killed, but this is the first time Gene has actually been confronted by somebody with intent to kill him dead. He takes it in his own usual Gene way, and also mirrors a bit of Episode 1 in terms of his escapism, except there’s a bit more drinking and no paid sex. He doesn’t have much belief in the afterlife, but you can tell he is unnerved how people are legit wanting him dead for the sake of being dead, instead of him being killed since he was just in the way of a job.

Thus it makes the scene where Gene lashes out at Melfina all the more impactful. Melfina gives him a kind of comfort he is foreign to, so he takes it as a romantic advance in a way to escape even further from his self-doubt. Then it hits Gene, never mind us, that we’ve yet to really get back to finding out who made Melfina, and how he made a promise to her they’d do such together. His final line before the eyecatch resonates, wondering “What the hell am I living for?” And you know what? He’s right. He has been pretty much absent-minded in becoming much more than he since he broke his space cherry, and all he can think to do is to just get by when it is no longer enough. Not when you’re targeted by Space Pirates, have three other mouths to feed, and more importantly three other individuals with their own distinct desires foreign than your own.

It then makes the final fight in this episode all the more worthwhile. It’s an incredible little spectacle of hand-to-hand combat, unseen since Gene fought Suzuka. Then it is made even more valuable given how despite everything, Jim, Aisha, Suzuka, and Melfina all stand up for him and do their best to help him. His opponent, the aforementioned Lei Long (aka Shimi), is a good combatant in how he puts Gene on the ropes but also confronts him about the gravity of his situation. If anything, Gene never did win this fight, Lei Long forfeited it because he could not help but be endeared to Mr. Starwind’s plight. I guess it is to serve as a way to finally get Gene to man up and get moving in the world, and I hope he goes for it, especially since the next episode seems to involve filler again.

I hope it’s good, because this great episode needs a good (if not exceptional) follow-through. Got to keep moving.

Before we do, and to lighten the mood, live an Aisha expression Appreciation Life. 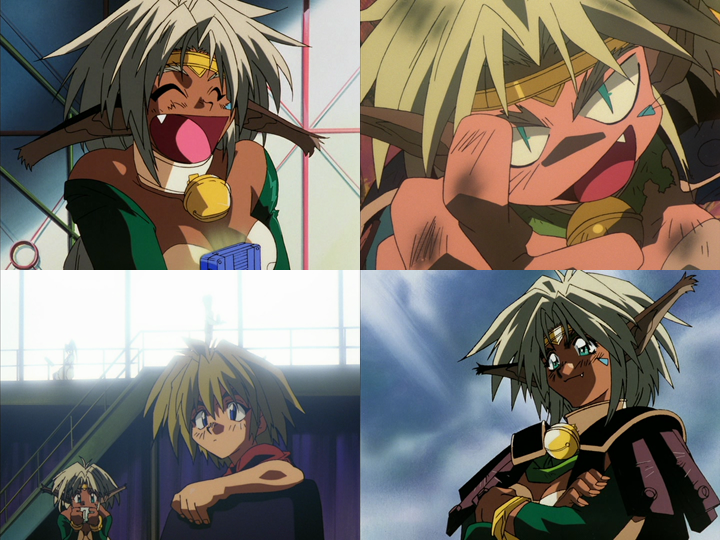