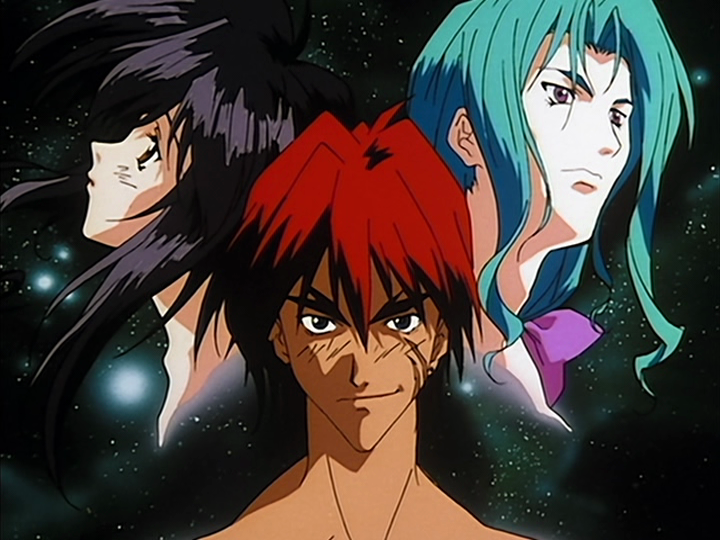 Well now. We are back to plot again, and more importantly, back to the McDougal brothers. It has been a five-episode absence for them in the series, and they come back in a big and satisfying way. It doesn’t look like they’re aligned with Hazanko and the Anten Seven at this juncture, but what we don’t know doesn’t hurt us in the slightest. More surprises are nice at this point.

The crux of this episode involves Melfina feeling rather glum about not going anywhere with her origin finding wish. You know things are getting a bit real if she wanders into some space church right after a grocery run and strikes up a conversation with the local clergy. This scene, coupled with Jet Black getting metaphysical in the prologue helps set the tone for one of two conflicts this week, and does a terrific job intriguing. However, despite Melfina uncertain of her faith in Gene’s problem, their interaction is absent from said crux. In fact, Gene and Melfina spend most of the episode separated from one another thanks to the McDougals.

So this is the first time Gene meets Ron, and of course it goes about as well as you’d expect. Ron doesn’t have much in terms of new information to share with us, other than he gets hired by every big entity in the system from Pirates to Space Forces, and how he has no idea about killing Gene’s dad. Given my lack of experience of this part in the series I can’t really tell for certain if he’s telling the truth or not. So that is something I’m looking forward to FINALLY finding out. Is the death of Gene’s dad related to something greater? Or was it all just bad luck? The plot thickens amidst the surprising gunfire between Caster and Caster, since Ron has one too.

Then there’s the OTHER major conflict this week, the one which brings all the metaphysical ballyhoo to full circle: Harry vs. Melfina. Now this part of the episode is the more intense of the two conflicts, due to Harry being unhinged. We know Harry is a bit of an oddball, but he degenerates into freaky scumbaggery as his advances to Melfina are rebuffed. It’s very hard to watch since we know Melfina isn’t as battle hardened as Gene, Aisha, or Suzuka, or at least has experience with a gun like Jim, and Harry is not very good at rejection. I mean Gene making advances to her back in the day was a bit too much, but Harry is just… wow. You know he’s going to flip at the slightest of bit of negative feedback but what he’s going to do is something else. It comes to a head when Melfina escapes to the Outlaw Star and alongside Gilliam, defends against a hacking attempt by Harry to hijack it for his and bro’s own high space adventures. Long story short, after an imaginative ‘battle’ in the ship’s cyberspace; she resists his technological advances as well. It’s a welcome scene, further solidifying her ‘relationship’ with Harry and achieving victory when it could’ve been Gene coming back in the nick of time just to rescue her again.

The only shortcoming (if you can call it one, hard to tell ) is how Gene and Melfina continue to be rather separate from one another even after this event. However, Melfina is now plagued with even more doubt after meeting Harry and being forcefed his “we’re not so different you and I so we must be together” spiel. So it could be said she’s just putting on a brave face for the boys. Gene also finally gets his ass in gear thanks to the return of another character: Dr. Gwen Khan. Given what has happened to him for the past few episodes on top of Khan’s posturing of knowing Melfina, Gene decides once and for all to go after the Galactic Leyline. Only issue here is he makes the decision in the presence of Jim, with somebody missing from the equation: Melfina.

It’s interesting how he’s making all these big series decisions without the presence of the one person who started it all. You’d think he’d declare it in front of her, but he isn’t. Yet this is probably not the episode where they reconcile in this regard, but only the start. Maybe within the next few episodes they can address this tense absence between the two characters, so Melfina can have faith once again in Gene.