Outlaw Star Episode 18 – Ctarl-Alt-Delete (Or: Do The Muscle Hustle) 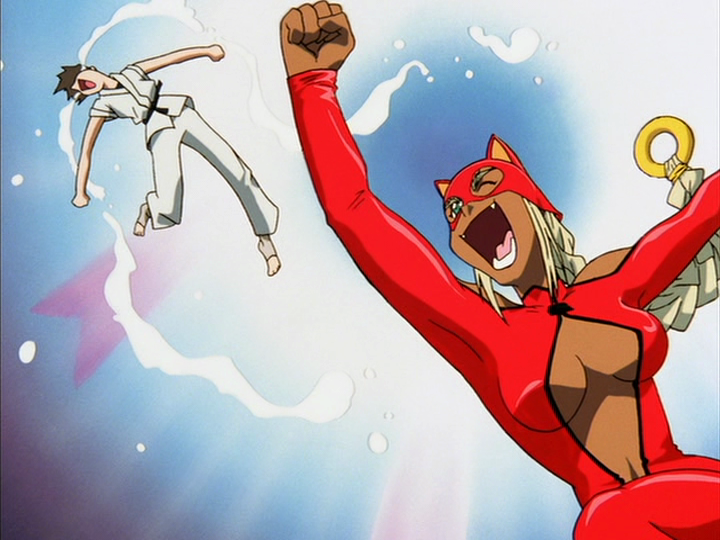 To sound like a broken record, how do you follow an episode that injected a shitton of adrenaline to the series and gives Gene an impetus to get his ass in gear?

Have him enter a big deal fighting tournament so Fred Luo can get out of marrying Space Ronda Rousey. Didn’t this happen already a few years back in… Wait, no. I… don’t think it’s really happened in any sortof space animu, at least anything like Outlaw Star.

However, like the space fishing trip before it, this wrestling episode is surprisingly endearing. Everybody is at their humourous best here, from Gene’s interactions with Fred, including him being quite aware of Fred’s preferences, to Fred himself aghast at the idea of heterosexual monogamy. It’s a nice way to kick off the episode and also as per usual builds upon Jet Black’s pre-intro narration.

The real fun doesn’t kick into high gear until the tournament, with Gene’s attempt to pass off as a lady only outmatched by Aisha’s unadulterated joy in kicking ass. No anti-Ctarl-Ctarl discrimination is gonna stop that girl, as she pummels her way to the top. You’d think we’d get some wacky hijinks with some absurd final match between Aisha and some jokey opponent, but then the series counters expectations. The plot comes back here, with one of the Anten Seven participating in the tournament and becoming the final opponent.

Her initial fight with Aisha is an exciting affair, and it helps how the episode doesn’t skimp on the way it presents the brawls of our favourite Ctarl-Ctarl. It’s a natural escalation which eventually gives us our first glimpse into the Ctarl-Ctarl species’s Beast form. And it’s… I guess fine really? Out of the episodes to showcase Aisha’s long talked about Beast mode it’s the peculiar filler episode, in a somewhat quick and not quite epic fashion, which eventually ends in an offscreen duel amidst a burning arena. It’s kindof disappointing really after it was hyped for so long, and even more so when you realize Suzuka done messed up. Suzuka is apparently the most feared assassin due to her meticulous and precise technique. Yet in this episode she is the one who set the entire arena on fire fighting one of those pirate grunts. Sortof out of character? Who knows? Who cares? In the end, Aisha wins offscreen and all is happy again.

All is even happier when Fred actually comes through for Gene and gives him the money he needs to set off for the Galactic Leyline. So I guess this episode is half-filler, you know things will be getting real when plot decides to show up unannounced in your amusing wrestling episode. I’ll take what I can get. It could have been better, but hey… We’re on our way.

Eight episodes, baby. We be ready. Have some Aisha Face in the meanwhile. 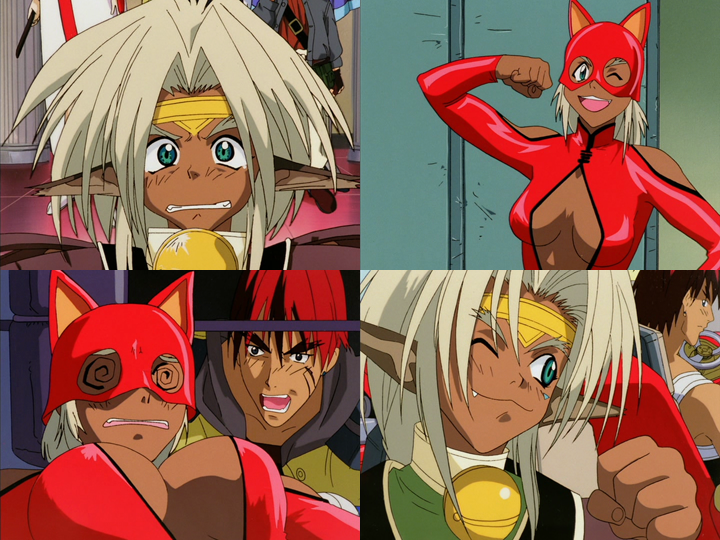