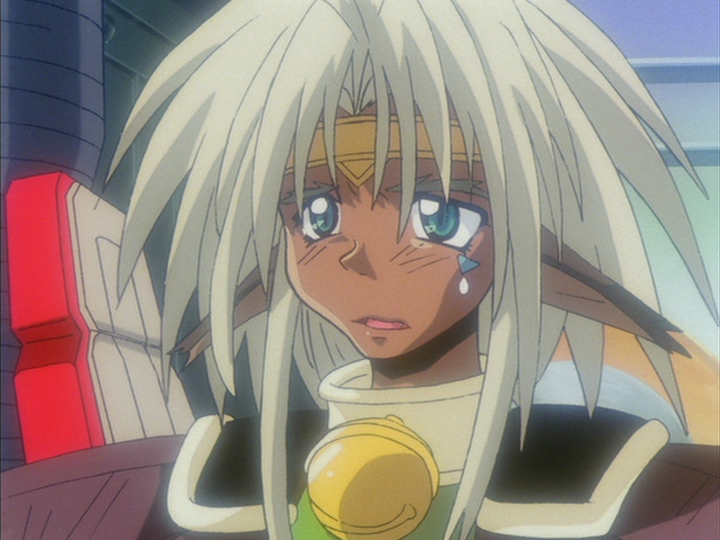 That is a disappointed Aisha Face, because there wasn’t enough of her to go around this week.

Thankfully, this is not a disappointing episode.

So we have a prison break episode, I could’ve sworn I’ve seen something similar to this back in the old Toonami days, maybe involving a wayward youth with a ripped Polaroid picture. To save Melfina, Gene is transferred into a high-security prison on a gravity-heavy planet, and must find the one inmate who has the coordinates of the Galactic Leyline. It goes about as well as you’d expect when a protagonist goes into a prison to do something: conflict with the warden, fairly intense regimen of torture, the guest character is a bit of a pessimistic curmudgeon, but all turns out well in the end.

Well… maybe it’s not TOO disappointing an episode if it turns out the usual way these prison break episodes do. However, it is buoyed by the fact this is Outlaw Star, and it is always nice to see the vast universe it purports to have expand with great vim and vigour. Gene is his usual self here to great effect and his brash persistence moves the plot along well. The guest character works well too, even if he what I said he was in the previous paragraph. Other than that there is not TOO much to talk about, due to the primary focus of Gene. I was thinking there’d be some BIG subplot where the rest of the Outlaw Star crew finds either a revelation or a way to get Melfina out of her Gwen Kahn-induced coma. However, this is remedied by episode’s end when Gene already finished the job (in a very creative way).

If I can glean anything out of it, it is how Kahn is not necessarily TOO much a villain. By that, I mean he is a super calculating mastermind who knows how to hold ransom to Gene and finds way to rout his opponents. No, he is just an amoral obsessive who REALLY wants those Galactic Leyline coordinates. Granted, I know he’ll be in endgame against Gene and the gang, but a true big bad? …Not really. It works since the McDougals and currently absent Hazanko make up that malevolent lobby in spades.