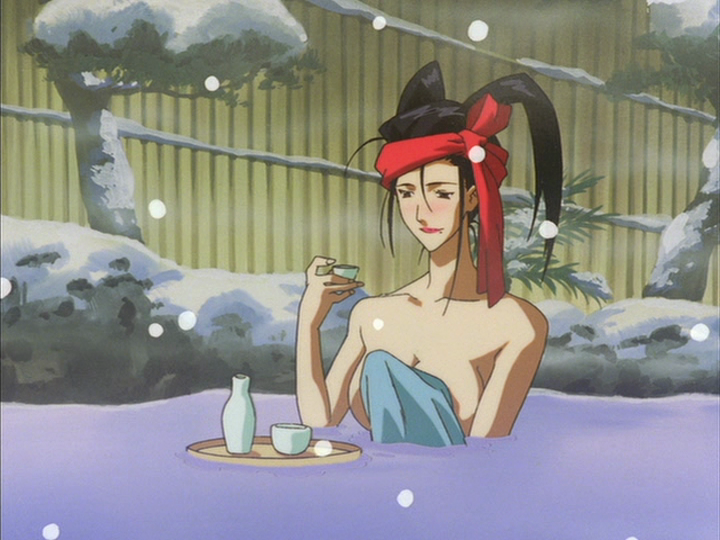 Welp, we’re finally here. Granted it’s been a few weeks since Adult Swim premiered it for the first time on television after over a decade since the original series… but we’re finally here. Despite being part of a franchise television block that had Tenchi Muyo and went out of its way to give all their nude girls bathing suits, Outlaw Star’s “Hot Springs Planet Tenrei” didn’t get such treatment. This is strange given how the only real full frontal we get is some Aisha (I guess Ctarl-Ctarl breasts are okay cuz they aren’t human), and some bits of ass from hot lizard lady and a guest human character. Such shit seems to be fairly easy to edit give or take.

However, this doesn’t really matter anymore since it is now a different time, and the episode can be accessed with ease from physical and digital media, but also the new Toonami. Still, it is a shame it happened, not only because it is a good episode, but also the lore found in it.

At first glance, with a lot of help from an eager Gene in the preview of this last episode, this might be a super lecherous time for the scoundrel. In a hot springs episode, one can expect nosebleeds, leering perversion, and the overall crux of it to be getting a look at some animu booty. Nope, it just so happens a hot springs planet is home to a set of ‘wizards’ who know how to make a shells for Gene’s signature Caster gun. Thus, when our hero says thrice how he didn’t come to Tenrei for the view, he actually means it (despite the occasional desire to peep). This is good, since while we have been familiar with the Caster to some degree; it has never been given much backstory. Hell, Jet Black doesn’t even talk about it in his episode preview, instead giving a chipper, out of character, monologue about Tenrei’s history. So it’s nice to see more about this gun, even though we’ve yet to come across how Gene got it (sh, don’t tell me if it happens), never mind what’s with all this prophecy about a red-haired man and his gun with magic bullets.

Of course it’s all played with well-made laughs, as we see Gene eschewing carnal comforts to brave all manner of physical harm just to get them. Not only does he have to deal with the amusing, eccentric trio who settled the planet, but also an Anten Seven assassin whose presence is handled with not so much dread, but pratfall when he fails time and time again to slay Starwind. The light tone is handled just right to not make this detour seem TOO superfluous and gives us a small reprieve before we get super serial with the Leyline. After a set of episodes since their launch into adventure mired in super serialness, what with being waylaid by McDougals and Gwen Khan, we needed this.

The world needed this. 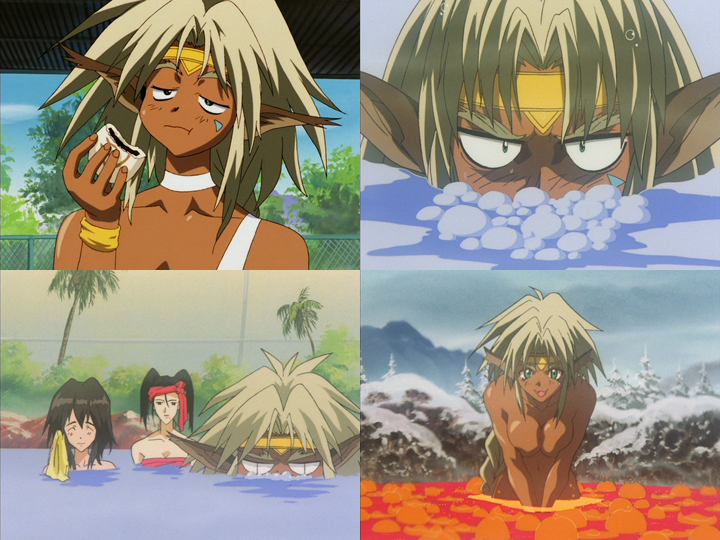