The Vision of Escaflowne Episode 06 – Meet the Crazed Gunman 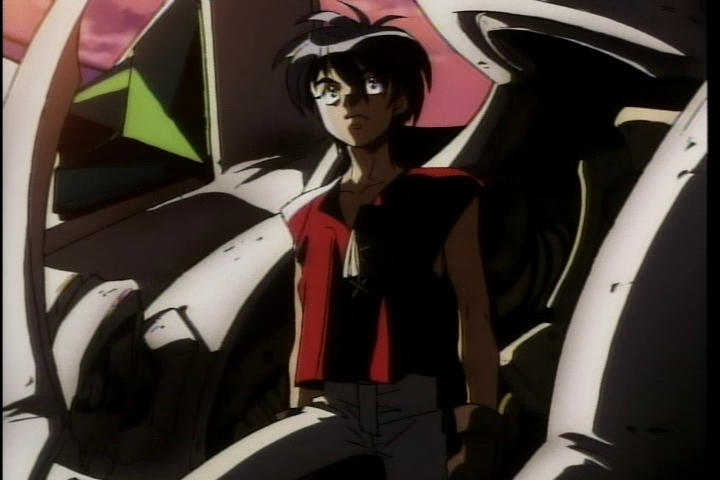 If that article subtitle doesn’t seem at all special it’s because you’re not having the small jingle played during most intros of Team Fortress 2’s “Meet The” videos pop up in your head as you read it.

In any case, yeah the scene where Dilandau tries to snipe Van from afar with that one Crima Claw is one of the great moments in the show. It does so much for it, establishing how far Dilandau will go to kill off Van whenever he has a chance, his noticing of Hitomi’s continued presence, how his actions clash with the diplomatic Folken, and the limits of Zaibach’s guymelef technology. It sticks with you, and it helps it is the only time you’ll ever see a guymelef do such a thing, thus cementing its memorability. It’s how Dilandau rolls on the battlefield and even in the capital of a country that is an ally to Zaibach.

Speaking of which, our expected downtime for this episode also allows us to see more of the world of Gaea. Obviously from Allen’s garb one can surmise Asturia is a country inspired by European culture. Then, wouldn’t ya know it; the capital is a port city in the vein of not just Venice, but also the port cities in the Low Countries of Europe (Belgium and the Netherlands). Again, very nice, showcasing how Gaea isn’t merely fantasy Japan but a true fantasy Earth with nations steeped in their own history and culture (wait till we get to my favourite of these: Freid). The city life is showcased well, and so is the political culture. Given its prosperity, the Asturian king seems both opulent and indolent, dismissing Allen’s claim of Zaibach attacking his frontier fort and letting Folken peg Fanelia (Bumpkin Samurai Land) as their assailants. He is a man of course more concerned with the maintained prosperity, which is unsurprising given the mercantile culture of Asturia. Obviously, karma will come back to bite that curmudgeon, just a question of when.

Thankfully his progeny seems to be okay, what with the introduction of another major character: Princess Millerna. Contrary though to the way Hitomi, Van, and Allen were introduced, Millerna’s debut is more… vague. Being a princess, she is treated with respect by Allen and her servants of course, but other than that it is hard to glean much on whether she will be someone worth liking. To be sure, I do not hate the character, but she always never struck me in appeal the way the main trio does. To use my standard of measurement on how we can learn much about a character based on the way people react to them, Millerna is a bit harder due to her royal status. Of course, Allen would treat her with respect, and there is deference by her servants. Other than that, the best that can be done is with Hitomi, whose astute observation skills on Millerna’s seeming infatuation with Allen collides with her teenage insecurity, nevermind her lack of decorum towards royalty. Her reaction is a mixture of uncertainty and possible jealousy, but given the events of this episode they do not come to light, but just established. Millerna thankfully takes it in stride, both being intrigued by Hitomi and treating her without any hint of malice. It’ll be nice to look back into this relationship once again, to see if it holds up better at this point or if it sucks. However, for right now, there is uncertainty but no cause for alarm.

The other big crux of the episode is Van confronting Folken once again. The former is still reeling from the shocking revelation from the previous episode, and does not know how to feel. However, with this episode and that scene on the bridge we finally see the resolve of Van solidify against his brother. Folken speaks in more lurid detail of his loyalty to Zaibach and its goals after being categorically vague the last time he and his bro met. With its aim of ending violence through violence (as per Van’s terse surmising), it reeks a bit of corny Gundam philosophy to be sure. However, in conjunction with Dornkirk’s musings about seeking the power of Atlantis in episode 3, it works well and establishes genuine motivation for the Creepy Tear Tattoo Man who takes shortcuts down dark alleyways just to get to a carriage that receives him in broad daylight. Again, you’re being dripfed these delicious morsels. Savour them, especially the one that gave this article’s Musical Spotlight.

Tomodachi (Friends) – One of three other insert songs for Escaflowne as sung by Hitomi herself, Maaya Sakamoto. After finding a compact disc in a crowded Asturian market, Hitomi immediately places it in her ‘Discoman’ and this song is belted out. Before she gets stricken by another vision of Van in peril, the song triggers memories of the people she left behind on Earth. I’ve never really cared for these insert songs in the show, much preferring the BGM and the opening, but I find it necessary to at least spotlight them. Why? It showcases the nascent talent of Maaya Sakamoto who would go on to accomplish wonders whether it is Hemisphere, Kiseki no Umi, and Purachina. It’s a nice, mellow, tune that elevates the small little moment it was in.

Shame Hitomi never did pay for it after she runs off to warn Van of peril.