He took the time to put lipstick on the T-Rex. That is commitment.

- The Bat Family & rogues gallery vs Joker was great. Loved the chaos of it all.

- Joker quips, makes dark jokes, etc. People are always bitching about Joker being too dark, never being funny anymore, and I guess it all depends on how "funny" you want the clown to be, or in what way, but I think we see that Mistah J isn't just some horror beast

Batman is just doing what you want, Joker. He gave you the Dick.

North Korea Can Eat Me (Oops, They Might Actually Do That, Since There's Nothing Else There To Eat)

"UNIVERSE!": Gundam Has The Right Stuf (Or Does It?)

Pissing away all of the good will it built...

OR on Anthony Cumia and the State of Free Speech 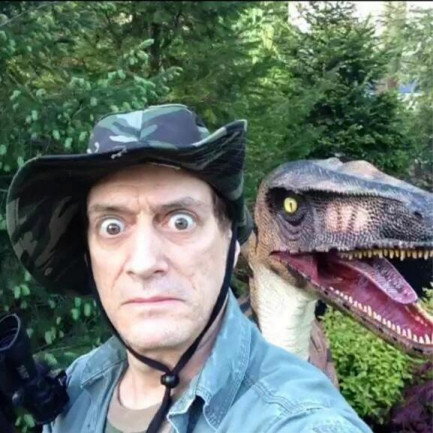 Otaku Revolution is a mix of odd personalities. Of the four main contributors two are Opie & Anthony fans, one is a Howard Stern fan, and one non-affiliated. What we all share, perhaps to our detriment, is a propensity for speaking our mind.

This past week co-host to the Opie & Anthony radio show, Anthony Cumia, was allegedly attacked while taking photos around Times Square in New York City. Following the attack he went on a racially tinged Twitter tirade verbally attacking the person who physically assault him and the society which, in his and the mind of many, promote such physical confrontations. SiriusXM would later fire Anthony for his tweets. For more information here is an AP story about to the incident and a list of stories ran by various websites.

Opie & Anthony, along with co-host Jim Norton and a myriad number of popular friends of the show, have long been proponents of free speech. Before you get your panties in a twist, we’re not talking about the First Amendment governmental protections. We’re talking about the American & civilized sensibility that people should be able to speak their minds openly and honestly. Time and time again the O&A show have denounced organizations and groups who have tried to censor individual comments and supported those who made them, regardless of whether they actually agree with said comments.

True to his word and character, Anthony continued to speak out on Twitter and defend himself against critics. Eventually SiriusXM, like most other organizations who’re too lazy/irresponsible to stand up for the people they pay to speak, would part ways with the radio host. Before that the always lamentable organization Gawker would pick up the Twitter tirade. In their traditional anti-speech way focus more on the words than the content said, not caring about the context, right to say it, or physical assault that lead up to it. In addition to questionable content in the original article the author, clearly ignorant of whom Anthony is and the O&A show, partook in actions unprofessional for someone who’d like to be identified as a journalist.

From there other media sources ran, only looking at the Twitter comments, often misconstruing, or all together leaving out, the precursor events.

Through the fires of this heated debate I reached to some or our contributors to get their personal thoughts on this incident. The intent was to get these varied opinions, without inadvertently turning members against each other, for a balanced discussion as possible. As always Otaku Revolution has been a forum for free expression, divisive as that may be.

What's Your Beef?: Stop Milking Your Feud, It's Udderly Ridiculous

So, it appears that a whole calvacade of folks come here (though it's more likely to be the same one person posing as different people) just to fucking troll me about things that have largely been settled, because they're pathetic and possibly have more time on their hands than even I do. So I've opened this entry up to comments where people can air out their greivances with me without bitching in any of the other article comments. Other articles are only about the things they cover, not your silly little feuds with me, so get it all out in the open here, get it off your chest, and then shut the fuck up and move on.

Not necessarily a Newtype Ghost Party... because you know, most of these people aren't dead.

So, who's seen Gundam UC Episode 7 yet? I wanted to gauge some (informal) reactions to the finale of the Gundam Unicorn saga, outside of Twitter comments. Other members of OR should feel free to add their own thoughts.