Episode 108, "The Heinous Mage Babidi and the King of the Underworld Dabura's Trap"

Synopsis: Kaioshin and Kibito are shocked that Babidi has the King of the Demon Realm, Dabura, under his thrall. Having outlived their purpose, Babidi and his henchman Pui Pui disposes of Spopovich and Yamu, respectively. Unknown to Goku and the group, Babidi and Dabura are aware of their presence, and after Babidi and Pui Pui enter the ship, Dabura attacks, killing Kibito. Then he transforms Kuririn and Piccolo into stone, which can only be undone with his death. Confident, the three Saiyans follow Dabura into the ship. A reluctant Kaioshin follows as well. They find themselves in a round room in the ship. Pui Pui is sent to fight them, and he explains that there are several levels on which they will face a different opponent before they can get to Babidi. Babidi adds Gohan's stolen energy to the Buu egg and finds it was a lot more than he expected. Vegeta wins a game of rock-paper-scissors to decide who fights Pui Pui. Pui Pui says that any energy used in fighting him will be collected for Buu, but Vegeta reasons he just won't take any damage. 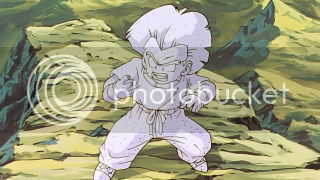 Not really a lot to say about this episode, because most of it is just set up for action. The set up, though, is somewhat interesting.

The episode covers all of Chapters 447 and 448 of the manga, with a little bit of 449. There's very little, if any, padding. It's being very faithful to the source material. It does end in a weird place, with Vegeta about to clean Pui Pui's clock, but it's pretty negligible.

Akira Toriyama must have really enjoyed the (actually incomplete, due to his death) Bruce Lee movie, Game of Death, wherein Lee plays a martial artist who fights his way up a pagoda of badasses, level by level, including Kareem Abdul-Jabbar. We already know he included Bruce Lee-inspired things in the manga, but the set up in Babidi's ship is very similar to Game of Death's, albeit in the opposite direction, fighting to get to the lower levels. It also resembles the set up of a video game, with each level having some kind of boss and you get to the next level by beating them until you get to the final boss. In this case, the final boss would be Babidi.

Toriyama writing laziness or just a good-natured nod towards a Bruce Lee movie? You be the judge! (I'll be the ambitious attorney who discovers your rulings are being bought by the corrupt politicians and have them overturned.)

I think this episode should have been called, "That's It! It's Over!! Non-Saiyans Are Officially Useless!!!", because I'm pretty sure it's the exact point when it becomes official that all non-Saiyan characters are entirely worthless to the narrative. Babidi singles out Goku, Vegeta, and Gohan as being the ones he wants to collect energy from and orders Dabura to do away with the others, as they're completely irrelevant to the cause. Kibito is immediately blown away and Kuririn and Piccolo become statues. Kaioshin is just around to gape at how far above his abilities the Super Saiyans are. It does become a bit humorous in that, since he's standing around telling them they must be crazy while they're playing "rock, paper, scissors" to decide who gets to fight, but Kuririn and Piccolo might as well be Yamucha at this point. Poor bastards.

I guess the only thing Kuririn and Piccolo can do now to cope with their place in life is to get stoned. Oh wait.

Bin Shimada, best known for being the voice of the awesome villain... Paptimus Scirocco from Mobile Suit Zeta Gundam (who else did you think I was talking about?) has replaced Joji Yanami as the voice of Babidi. I'm not exactly sure how I feel about this voice. It feels a bit on-the-nose, kind of blatantly wormy and snide, rather than Yanami's more elderly, croaky version, that made him sound a bit more experienced. But I always heard complaints even from fans of the Japanese version that Yanami shouldn't have played the role, because it just sounded like "evil Kaio". Shimada's version actually sounds more like Funimation's Duncan Brannan version of the character. It's not bad, mind you (neither is Brannan's), but it comes off almost like Toei is knowingly playing to fans of the English dubbed version.

Speaking of which, apparently there's something called the "International Version" of this arc of Kai, wherein it's longer and contains more filler material from the original DBZ, and it's possible that's the version we'll be getting here in North America. My question is: why? What the hell is that all about? Isn't the entire point of Dragon Ball Kai that it's an abbreviated version of Dragon Ball Z, cut so it more closely resembles the manga, removing excess filler material? Why would you want the same thing as regular DBZ, just with a different soundtrack and a few new voice actors? International version? I'm not buying that shit. What's the point when I can just watch that stuff on my Dragon Boxes? Toei, get your shit together.