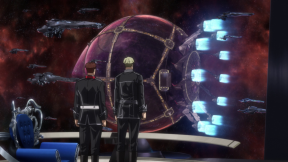 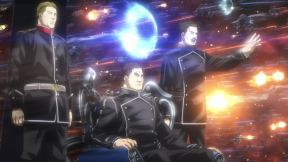 Synopsis: With all other ideas exhausted, Kempf has decided to crash Geiersburg into Iserlohn. While the Imperial fleet retreats from the battlefield, control of Geiersburg is routed through a single control chair which Kempf takes up for himself, alone. The Alliance forces concentrate their fire towards one of the navigation engines to knock the oncoming fortress off course. The engine is destroyed, diverting Geiersburg, but Kempft re-adjusts the course, hoping to take out Iserlohn with direct hits from its main cannon. However, Iserlohn fires its Thor's Hammer twice, destroying Geiersburg and killing Kempf. Mueller is injured when a shockwave hits his ship. Two of Yang's officers take ships out to follow and destroy the escaping Imperials, but are met with the Mittermeyer and Reuenthal fleets, who easily destroy them. 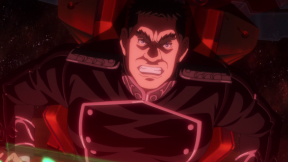 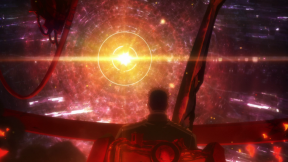 The season premiere of DNT gives us the conclusion of the "fortress vs fortress" arc in grand fashion, though it honestly could (and should) have been a totally wizard season finale from the last season. Still, it did get me excited for what's coming next, even though, having read the books, I know we won't be getting so much action for a little while yet.

Speaking of the books, this episode covered the last part of Chapter 8 and the very beginning of Chapter 9 of Volume 3: Endurance. There were some changes made, but I felt like many of them suited the story well, even if they were a little farfetched. For instance, in the novel, Kempf is not totally alone in Geiersburg when he takes it on a suicide run. There are several other soldiers on board and the few that survive evacuate with Chief of Staff Fusseneger after Kempf dies from wounds he sustains. In fact, in the book, there is a fight over an escape craft in which several soldiers die. This is not depicted in this episode, which is a bit of a shame, because it would emphasize the panic of evacuation. Instead, we see Kempf take on this mission solo and recieve a truly grisly fate.

What unfolds in this episode is a bit more cinematic that in the books and the OVA: Kempf goes it alone as Geiersburg hurdles through space at Iserlohn, exchanging blows even as he's knocked off course and even getting one final blast of Geiersburg's cannon off before being obliterated by Iserlohn's Thor's Hammer. It's a real action-packed shoot-out, followed by a short, tragic scene of Kempf's final thoughts of his family, displayed in a dreamlike setting where he demonstrates his flight ability to his children and wife. We're snapped back to reality when Geiersburg finally explodes and the shockwave rocks the remaining Imperial ships. In the book, Geiersburg actually goes flying into the fleet and destroys many ships. Here, it's the explosion that rocks Mueller's ship and sends him flying from his post, injuring him.

It's too bad that Yang's overwhelming victory is soured somewhat by the overzealous actions of Nyugen and Alarcon, who pursue the retreating Imperials too far and end up being obliterated by Mittermeyer and Reuenthal's fleets. But it does serve as a good lesson to Julian about retreating and holding back when necessary. If only Nyugen and Alarcorn hadn't been so battle hungry, they might have survived for a while yet under Yang's charmed leadership.

Speaking of Julian, his actions during the battle, sussing out how the enemy would act, shows that Yang's brilliance has rubbed off on him, and despite his mentor's objections, he has a future ahead of him in the military. I love the exchange with Merkatz where he notes that Yang's attitude towards Julian's future lacks the spirit of democracy he holds so dear. It's just a joke, but it probably cut Yang to the bone. Sooner or later, Yang will have to accept his ward's ambitions, if just out of his only philosophy.

If I'm correct, the next episode should take place at least partially on Phezzan and involve Rubinsky and Kesserling. We might also get a bit of Kempf's family's mourning. We're nearing the end of Volume 3's adaptation.

Overall, an excellent episode. One of DNT's best. 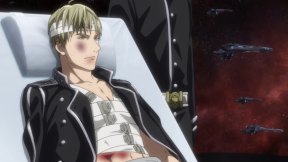 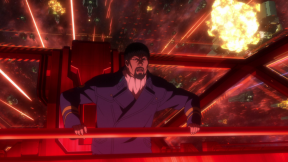