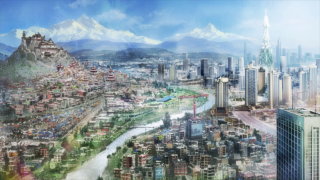 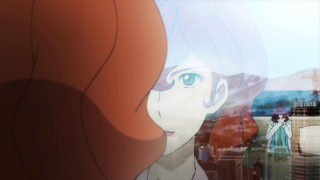 Synopsis:  After Dolma is taken back to Padar via CIA escort, Lupin and the gang make their way to her country to pursue their interests. Ami strikes an unsteady alliance with Fujiko to gain access to the palace Dolma is held in. The American government is assisting a conservative faction of Dolma's government in a coup that will overthrow the reformers and taking possession of Dolma is part of that plan. Lupin infiltrates the palace disguised as Inspector Zenigata, and encounters Ami, the CIA agent who extracted the princess, and Dolma herself. But a lot of fancy footwork can't prepare Lupin for the startling reaction of his target! Lupin takes on the half-modern utopia with a dark secret in his continuing efforts to obtain the Bloody Teardrop! 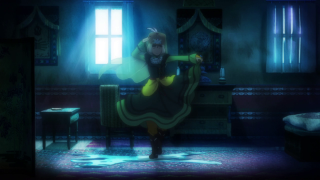 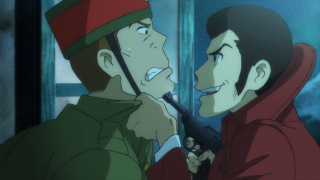 Well, that was certainly a quick change of scenery. In part one of this story line, we were in Annency, France, at the private girl's school where terrorists had seized control to ransom the children of wealthy parents. But Dolma gets taken by the blond guy who was showing Fujiko around and we're suddenly in this fictional country that appears to be part of Central or South Asia. We get a little cameo for Albert as he investigates what went on in the school incident, but Lupin, Jigen, and Goemon still seem to be after the royal family's prized jewel, while Fujiko and Ami want to retrieve the latter's new friend. The city this all takes place in is a mix of the traditional and modern, the low and high tech, but as Jigen points out, it may be less technocracy and more surveillance state.

As the American government/CIA is wont to do, they're assisting the traditional faction in a takeover of a government, hoping to curb any major reforms that might be against the interest of US foreign policy. Ah, you know, it's almost like Iran in 1953, Guatemala in 1954, Iraq in 1958, Laos in 1958-60, Congo in 1960, Dominican Republic in 1961, South Vietnam in 1963, Brazil in 1964, Chile in 1973, El Salvador in 1980, Haiti in 1986, Panama in 1989, Haiti (again) in 1990, Haiti (AGAIN) in 1993, and so on, and so forth. I can't imagine why so many countries across the planet are at best deeply skeptical about the "good guys" that are the Americans and their policing of the world. So it is entirely within reason that the CIA would back such a coup in a country like Padar, because, well, it's a country here, and thus is open for the US' exploitation. Look, I love my country, but we're up to all kinds of shady shit. I mean, yeah, some of it may actually serve a tangible, practical purpose in the long run, but that remains to be seen about this situation.

Lupin's acting a little shady, too, threatening one of the guards with death just to get a little information. It's not even like he's a guy like Guillaume who's a total deserving recepient of cruel threats, it's just some random guard for the high priest guy. Then again, if he's involved in the holding of Dolma against her will, maybe Lupin's harder tactics are justified. This is a lot to go through for that jewel, I'll say that much.

It's good to see Fujiko and Ami continue to spend time together, relying on each other to get the right kind of information to find Dolma. You can tell that Ami clearly still disdains the buxom burglar's methods, but can hardly argue with the results. Fujiko, for her part, doesn't mind the criticism, trying to pass along her own kind of wisdom to the girl. The bit about using her natural talents much as any scholar or athlete would is peak Fujiko (heh). It's not just that she's incapable without her feminine beauty, but as long as it's a tool in her collection, she may as well use it, she reasons. The two of them, Fujiko and Ami, have their own versions of specialization, and maybe Ami isn't so different from her after all (though she seems a bit more loyal).

After taking out the CIA agent, we get a bit of a surprise cliffhanger in the form of Lupin's sudden injury by arrow. One that was apparently fired by Dolma. Why would she shoot Lupin? Is it because she knows he's a thief looking to take the Bloody Teardrop? Or has the high priest guy that's organizing the coup somehow taken control of her? Either way, Ami will have to think fast to get Lupin out of this situation.

This episode is a great continuation of this story line. The political intrigue and social commentary on the utilization of high technology permeates an already compelling heist story that's become a world hopping adventure. 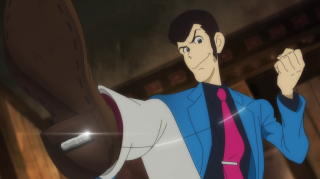