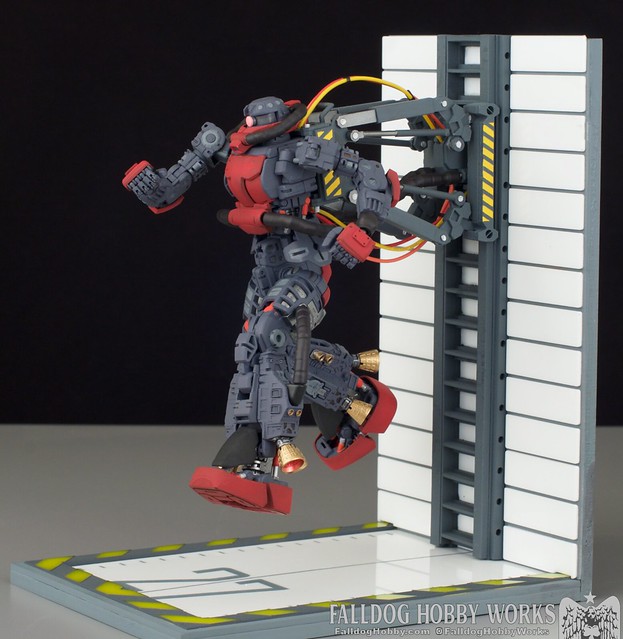 As many of you know I have a ton of Gunpla ideas floating around in my head and only a small portion ever see the light of day. One and a while I get off my ass and actually carry one of those ideas to completion. Thanks to GoodGuyDan for running a Zaku oriented group build and offering that extra motiviation.

This build was inspired by a quick scene in episode 2 of Gundam Thunderbolt. In this scene we see Daryl connected up to his Zaku connected up to a gantry, stripped of outer armor, so they can test his mobility with the Reuse “P” Device. In it he begins to daydream and run, the key pose I wanted to capture. Ah hell, here’s the scene itself. 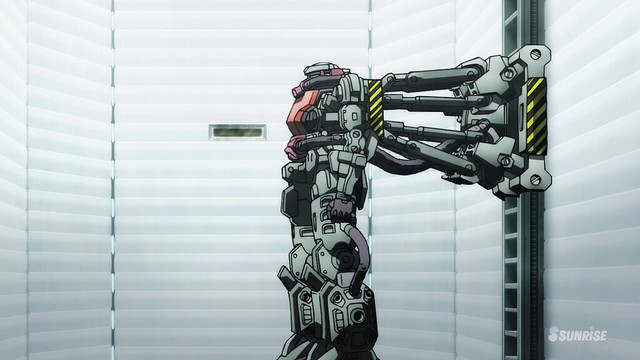 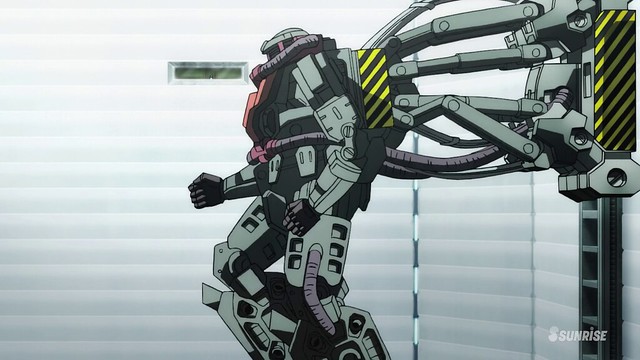 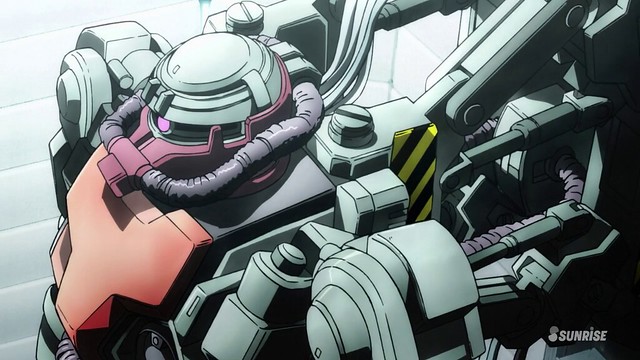 If you stopped to watch you’d see that the animation, specifically the gantry, is pretty damn janky. It doesn’t move in a way that’s realistic and the proportions fly all over the place like an inflatable tube man. Most of my reference points came from volume 1 of the manga. From this I based quite a lot of the diorama, or else drew inspiration. The gantry mechanisms, the backpack connection, the selection of armor pieces still on the Zaku, etc etc are all as close as I could get to the original. Other elements, like “27” and floor design, was more "how can I build something that makes sense with this project but still draw the right inspiration." 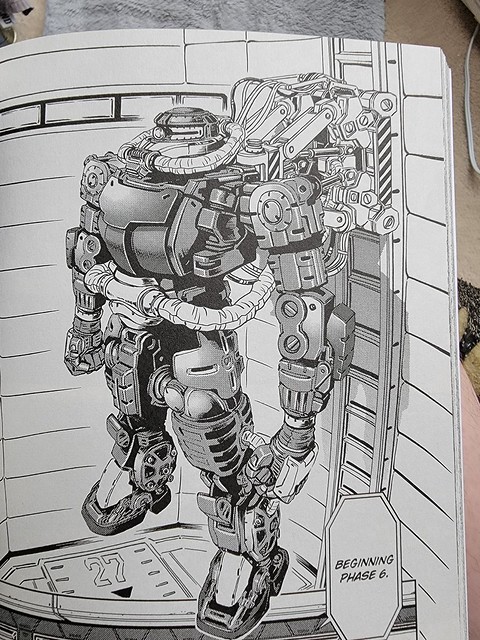 It’s worth noting that the Zaku in the manga is just a stripped down MG kit, down to all the joints and bits missing armor pieces. This meant that customization was relatively light, just filled in a few connector spots, lopped off the very top of the head, and made some changes to the visor area. Since I had a couple of High Mobility Zakus laying around to take parts from I just went with what I had. Didn’t want to waste a whole MG Psycho Zaku.

Most of the diorama is built from laser cut acrylic. In addition to using it to make custom action bases I got my laser to do projects like this. I learned a lot of important lessons, like thin acrylic snaps very easily. Sigh. Many hours went into designing, cutting, revisions, and starting over. It helps that the design of the armature is 90% flat surfaces. All of the pistons work, so the kit can be moved in, out, up down, even twist a bit. I didn’t account for paint clearances so some of the joints are pretty tight and quite a few of the smaller surface connections broke during final assembly. Superglue to the rescue.

I couldn’t find plastic that properly matched the trash bag look of the power conduits so I opted to use some heat shrink rubber tubing. The larger lines that connect the torso to the back of the dio are built from 3mm aluminum wire with custom cut tubes underneath. It didn’t quite come out like I was expecting, but the thick wire was chosen to help support the kit. I even went as far as to use metal, both externally and placed inside parts of the pistons, as part of the overall plan to hold up the kit. It’s at the point where things are so over-engineered that the kit doesn’t even wobble when I move the stand.

I tried to keep the paint scheme very simple to match the source material. Where the show uses the same gray for the Zaku and the support structure, I decided a little bit of difference between the two would help the overall appearance. I also added some light detailing to the Zaku's frame to break up the monotone monotony. In retrospect I should have added a bit more detail to the lower legs. The initial thought was to not overdo the legs since the arms are comparatively light in detail. Some good ol' Gun Metal here and there for effect, along with pistons painted with a orange/red mix to draw from the Psycho Zaku's orange armor pieces. Oh, and I'll always be a sucker for a pink monoeye.

Anyhow, as usual, hope you enjoyed this little write up. More photos below. Feel free to reach out via comments below, or Instagram, if you have any questions! 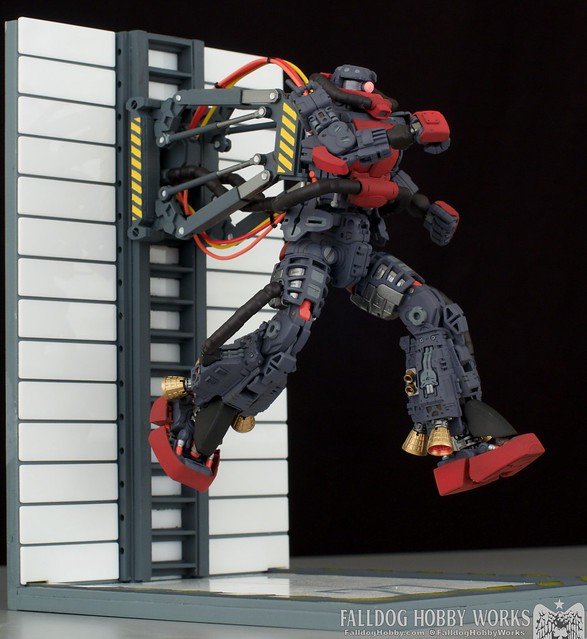 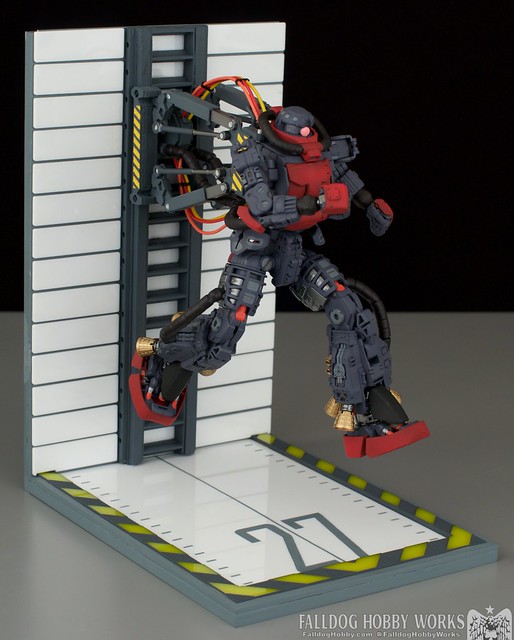 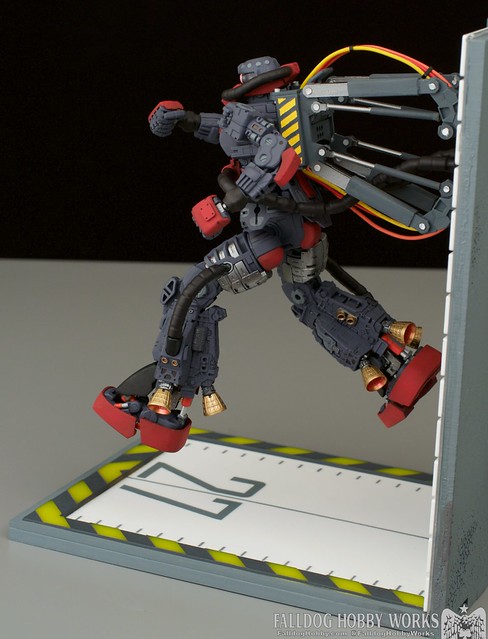 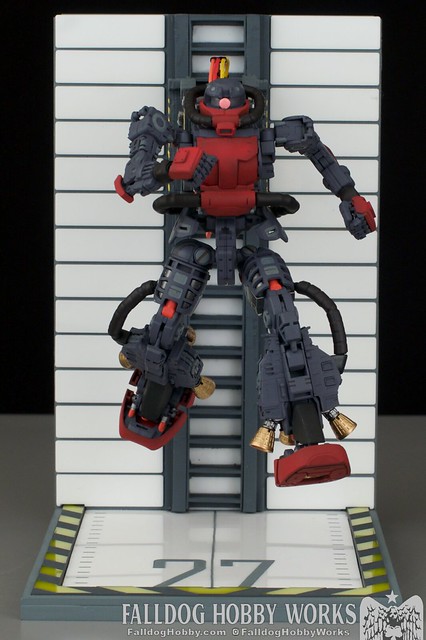 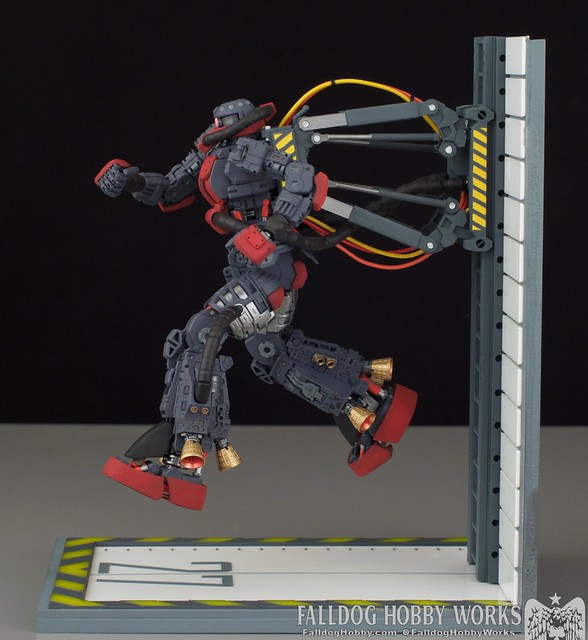