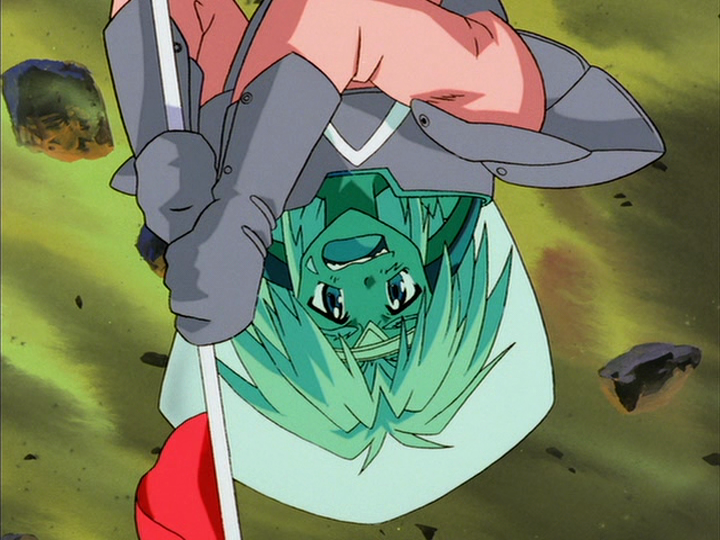 Yup, the screenshot seen above is the moment I pretty much dropped the series from active watching. Again, to my eternal regret.

I say this because wow, this is a really good episode. I had initially thought this to be a continuation of the Space Race, where Gene and the gang get waylaid in the middle of it while Harry had a comfortable lead. Turns out, as seen in the last episode, it is not the case. The first part starts out interesting by way of throwing us in media res of the encounter’s beginning. Interspersed with their search for McDougal, we see Gene’s reaction to Harry’s video, the reveal of how the Galactic Leyline is interpreted by various people, Aisha’s ‘official’ joining up with the team, and their first encounter with Professor Khan. These are pretty good; everything is falling into place with all the important players finally coming around. The only exception is Suzuka, who doesn’t even appear in the episode. However, again we already know we will see her again, so all is well.

The battle with the El Dorado is for the most part a subdued affair, with Harry preferring to wear them down by missile attacks than close range combat. It helps to amplify his lethality as per the Jet Black narration in this episode, and also to further the fact the McDougals NEVER play fair. Eventually with some quick thinking by Gene and an eager Aisha, they are routed and not only are the fates of Starwind and McDougal more intertwined, another set of fates is as well. This set is of course the fates of Harry and Melfina, thanks to Harry’s attempts to hack the Outlaw Star. Both do not know each other well, but I’m definitely sure the possibilities of the relationship sweetening are very VERY low. Despite dropping off the animu, I sometimes came back to it, and yes… this does get build up later on.

Either way, I can say with confidence I’m intrigued once more. Sadly (or is it?) next week is filler, yet now we have a full cast to have fun with, so I’m excited where this goes…

…Probably the week after next week. Since this is usually the time where an animu takes a weeklong break from broadcasting, I’ll do the same as well due to precedence. What an unfortunate event given this is the episode I dropped the series with.

But no worries, it won’t happen again. Promise.