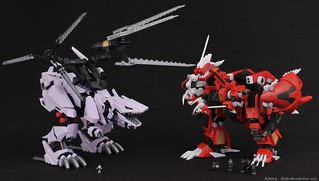 I wanted to take a few minutes out to discuss the latest Zoids HMM builds I’ve gone through, specifically the HMM Geno Breaker and HMM Berserk Fury (or Berserk Führer if you didn’t grow up with the Americanized Zoids New Century). I picked up both thinking they would be pretty similar builds that would look good side by side in my collection. Well, one was a delightful build… the other not so much.

Frankly, the Geno Breaker is not a good kit. There aren’t any major issues with the build, just lots of minor ones which add up. The HMM line of Zoids kits is from Kotobukiya, a model manufacturer whose build quality has been pretty hit and miss over the years. Typically this means poor engineering choices, poorly designed joints, bad seam lines, that sort of thing. Every now and then you encounter a kit fit issues, the Geno Breaker is one of them. There are quite a few pieces throughout the kit that don’t fit too well. They’re either too loose or too tight such that they’re quick to fall off or would be a huge pain in the ass if you ever had to dismantle or paint the kit. Often these fitment issues run-a-muck of bad engineering which exacerbates bad seam lines, makes poseing the kit a bitch sketchy, or simple leaves weird and unsightly gaps here and there.

The amount of effort one would need to get the kit painted and looking its best is on par with a perfect grade kit. As with the other kits in the HMM Zoids line there are a plethora of details that would need attention. There are also quite a few pieces that really should be glued together, the joints should be stiffened, and the whole thing should really be painted beyond the ghastly contrast that is its red/white/brown/black colour scheme. 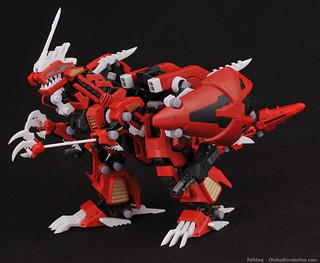 There are a couple variations of the Geno Breaker out there if you’re still interested but not sold on all the red. There’s the regular ol’ Geno Breaker and there’s the Raven edition (the one I have). The Raven version just had gold in a few areas that were black on the original and some black detail on the claw mechanisms. There’s the original Geno Saurer, which is pretty much the same kit but black, purple, and back mounted guns instead of the side claw things. There’s also Raven’s version of the Geno Saurer where the frame is red instead of purple and the Psycho Geno Saurer which is blue and purple.

Compared to the Geno Breaker, the Berserk Fury is a Master Grade kit in terms of build effort. Yes, there’s a lot of detail here too, but you don’t really have to make much in the way of modifications. The build is a lot less complex as well, in part due to the fact that there aren’t as many exposed inner workings as you’d find on the Geno Breaker. The Berserk Fury is only about 515 parts across 31 runners. The Geno Breaker is about 660 parts across 57 runners. They ran out of English alphabet letters to use and started using Japanese kana characters. 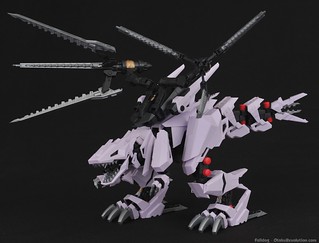 Overall the Berserk Fury build was a lot of fun. All the parts fit together really well, nothing fell off or seemed like it needed glue, and posing was an easy task. Design wise I really I’m pretty partial to the Berserk Fury was well. The simple colour scheme, the different angles, well, I suppose it just speaks to me on a base level. Plus, you can actually close the Berserk Fury’s mouth all the way! 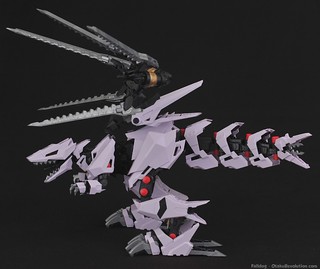 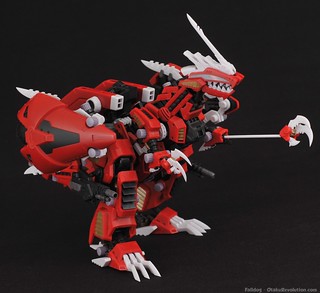 If you’ve got a lot of free time and have a red fixation get a MG Sazabi ver. Ka. Then maybe the Geno Breaker. Okay, maybe I'm being a bit hard on the kit, but I wouldn't recommended it to anyone unless they were a fan.

Unfortunately I don't have the time to do a full blown or proper review with photos of either kit. If you're looking for more photos of what the kits can do check out the always excellent reviews by Dalong. The Berserk Fury can review can be found here. The Geno Breaker review is here. Enjoy!