Spectre makes Blackfire humble, Arkham Asylum crumbles, Batwing takes a tumble, and Batman feels like he's fumbled in this thirtieth entry in DC's weekly Batman (melo)drama. With Blackfire's plans stomped by an irate Spirit of Vengeance and Arkham a giant crater, it's possible that we're finally seeing the finish line for all this supernatural nonsense that's getting in the way of the battle with Hush, Catwoman's rise to power, and Jim Gordon's situation (when was the last time we even saw Jimbo?). And frankly, this issue seems a little padded. Just like this particular part of this series. 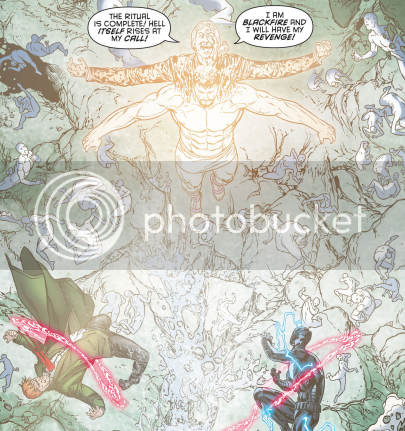 Yeah... this needed a full page. Just like it needed two issues.

After all that build up, several issues of Jim Corrigan as a character, the stalling, the "Oh noes, I can't summon my other half", the posturing by Deacon Blackfire, the hammer you knew was coming down onto Arkham, and we get, what, two, three pages of The Spectre? Well what was keeping him? Was he on the can? Does he just like to see Corrigan suffer? He just bampfs in, separates the spirit of Blackfire from Maxie Zeus, banishes him to the ether, and bam, genie back in the bottle. Oh, but then the asylum falls. Thanks a lot, Spectre. Maybe you could have placed your container and Batwing out of harm's way, but then we might not get the harrowing scene of a character I DO NOT CARE ABOUT WHATSOEVER (Batwing) under a bunch of rubble, praying as his life slips away. NOBODY CARES. We know he's probably not going to be killed off. Stop telegraphing your bullshit.

"MY JOB IS DONE HERE. Please send my check."

And, of course, it takes Arkham four or five pages to collapse and for the artist to finish showing us wreckage and hands sticking out of it. We get it, a lot of people are buried underneath there. But really, how many can there be? When Batwing and Corrigan first broke in several issues ago, the place seemed mostly abandoned, other than Blackfire's minions. I assumed most of the inmates already escaped somewhere. When did they have time to put Alfred in that straight jacket and put him into a cell? It is utterly ludicrous that nobody outside the Asylum has noticed in days that this stuff was going on. And do we really need three pages of the Asylum collapsing. with big panels to show us all the debris and such? WE GET IT.

Take note, kids. The sound of an insane asylum full of supervillains collapsing is KRAKA THOOM.

I've lost a lot of patience with this particular story arc in this book. There are so many other more interesting things going on, but instead we get a lot of OH NO WHAT A HORRIBLE TRAGEDY THAT HAS HAPPENED and we even end the damn issue with Joker's Daughter of all people, who know has explosives strapped to her. I hope she blows herself up because a more annoying, less interesting Batman villain I cannot imagine at this point.

How has Jokers' face not complete fallen apart at this point?

I also love how the Gotham City Police Department is so utterly out-of-its-mind STUPID that their first priority is trying to arrest Batman after the Asylum collapse. Yikes.

But hey... at least the art is pretty solid, capturing the escalating disaster and the grave expressions in reaction to it.

NEXT: The Dynamic Duo... Alfred and Bane?