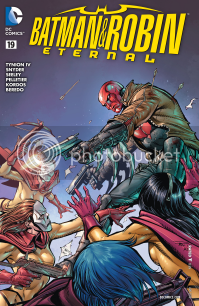 Man, the Tumblr crowd's getting rough.

School's in session for spy kids with aggression and the cure is fear possession which leads Harper to an expression towards Cassandra's past transgression all in this nineteenth issue of DC's weekly Batman throwdown. Merry Old England has become a little less jovial when Mother's Icthys virus brings out the killer in St. Hadrain's already well-trained student bod, which means our heroes are either up to their necks in teenage girl fists or in the case of the teen heroes, now psychotically violent. Helena isn't too pleased about the situation, either. She didn't kill Mr. Minos only to lose her school to some frumpy old bag Johnny-come-lately supervillain with a Mommy Dearest gimmick, damn it. Is that kid in the middle using a Sharpie marker as a weapon?

St. Haidren's Finishing School For Girls first appeared in Grant Morrison's Batman Incorporated: Leviathan Strikes! special, which was Pre-Flashpoint, so not taking place in this continuity, but with effects felt in it. It remains even in this DC, Helena Bertinelli, world the place where Sypral trains young ladies to be spies and assassins. In the pages of Grayson, Dick Grayson has a double role as an agent of Spyral and a teacher at the school, and ever since agent Poppy Ashmore was exposed as being one of Mother's recruits, Spyral's been a part of this storyline as much as the Bat folks. Though it is odd that there are pages of nods to things that were more part of Morrison's Pre-New 52 and Post-New 52 Batman Inc storyline in a comic that really doesn't need that (at least, not two to three pages of it). It does make an interesting backdrop to the action in this part of the weekly's storyline, however. Because that would work so well on people not outside and looking up, right? FFS.

Helena, now head of Spyral in the Grayson book, is one of those characters that you're never really clear where her head or loyalty is at, whether she subscribes to the same philosophy Mr. Minos did of uncovering all the secret identities of superheroes, or whether she just wants to safeguard the world somehow. That's something that'll probably be revealed in that book. In this one, much as that one, she's extremely irritated over Dick's baggage and tendency to want to take charge on his own, and she takes subduing a controlled Cassie very seriously. Honestly, it's probably a good idea, given that Cass is a trained killer, but Helena is somebody who's actually killed more than once. I've read some complaints that Cass seems "overpowered" in this issue, but I think they're fairly evenly matched, and Cass only manages to catch Helena off guard. Ah, "WOK", the sound of a crazed child assassin headbutting you in the nose.

Similarly, Harper gives Jason a hard time because he wasn't expecting to be zapped. I can't imagine, even in her controlled state, she's much of a match for most of the Bat crew, given that while tough, she never got that full training from Batman. But she's got a lot of rage built up, and it's only worse when they give her the fear gas to cure her of the mind virus, because she immediately targets Cass. You can't blame her, since Cass did kill her mother. But if it takes too long to subdue her in the next issue, I might have to call a little bullshit. I like Harper a lot, but even snapped she shouldn't be much of a challenge to Dick, Tim, or Jason. I can imagine Cassandra willingly taking some blows out of guilt, but even then, she's still in training. Can this romance be saved?

Anyway, while the story is moving along again, I still find myself drifting a little in my interest. The school battle continues into the next issue, but I hope it doesn't take up too much more space, because I'd rather get to the final showdown with Mother than languish in the "super virus" subplot we see in a million Batman storylines. And Jeff Goldblum as Tim Drake.

Next: After School Detention