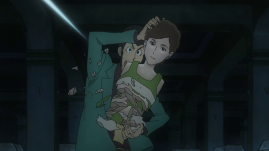 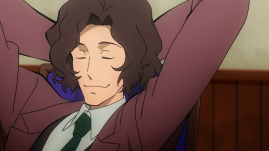 Synopsis: Lupin is still pursuing the mystery of the Mongolian clock as several parties converge to decipher its secrets and try to control its power. Ruriko and Sarantuya are kidnapped by the nefarious Daidoji and Goemon looks to get them back, but will Lupin get to them first and solve the riddle of the clock? And what is the nature of the Showa Era Japan that Lupin finds himself in? It's a race against the clock as Lupin reveals not everything is as it seems! 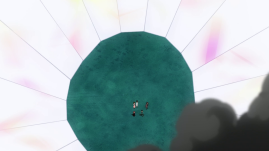 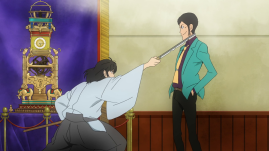 This isn't just the worst episode of this series, it might be one of the worst Lupin III entries ever. What a huge letdown, given the mystery that was built in the first chapter of the story.

FIrst of all, the whole Showa Era Japan thing? It's just a big virtual reality illusion constructed by some kind of high tech machine for the sole purpose of fooling Lupin into giving the password to his hideout. They must have spent millions of dollars on all that technology, and for what? To fool Lupin into giving his password? What? What were Lupin and Goemon even doing in that laboratory to begin with? No explanation. What a crock of shit. And somehow Ruriko is... like, the ghost of the woman who developed the technology? Whaaaat?

Then there's the Ruriko and Sarantuya relationship cop-out, where it turns out that Sarantuya is actually a guy and the heir to... what, the Mongolian Empire, or something? Haven't Ruriko and Saratuya been together for a long time by now? And Ruriko didn't notice that Sarantuya was a guy this whole time? Why even take this angle to the story? Just give us our lesbians, damn it. This queer-bait-and-switch nonsense was unnecessary and disappointing.

And what was even the point of Akechi Kogoro being featured in this two parter? I looked forward to seeing Lupin take on another famous literary detective, but Kogoro was barely in either episode. He must've had maybe six lines in total. He was less of a factor in these episodes as the colonel or Inspector Zeni---I mean, Namikoshi. What an enormous letdown.

Goemon is wasted, Not-Jigen is wasted, Fuji---I mean, Black Lizard is wasted. This whole two-parter was a complete waste of time and animation.

Fortunately, we return to the Lupin vs Sherlock Holmes storyline in the next episode. I hope it's good, because if the next few episodes are as bad as this one, I'm seriously considering dropping this show. 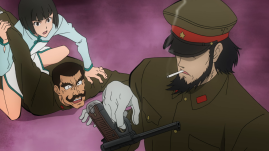 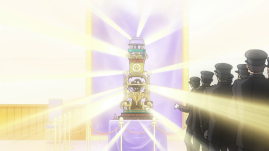