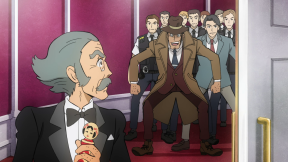 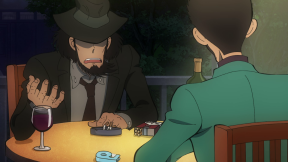 Comments: Lupin and Fujiko are both competing to get the valuable Jet-Black Diamond. The clues to its location are hidden in kokeshi dolls, one hidden in a cavern, another in the possession of an elderly woman whose granddaughter keeps her company. The action takes to Brazil, where Fujiko hones in on the treasure, but it seems like there's more (and less) to it than she thought. What is the secret of the Jet-Black Diamond? It's a hunt peppered with mystery! 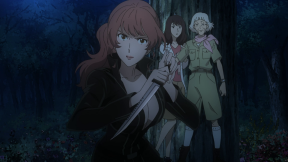 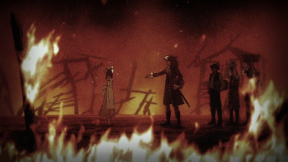 I thought this was an okay episode, but a lot about it doesn't add up.

Were the sisters Japanese or Brazilian? Why would Zeke make Japanese kokeshi dolls? Why does Zeke look like a classic pirate when that age of piracy ended hundreds of years ago, not 75 years ago? Why was Zeke executed when Brazil hasn't used the death penalty since 1876? Since when does Lupin have access to hologram technology? How is Lupin controlling a drone in Brazil from England? Why was Goemon in this episode if he didn't do anything? Why was Jigen talking about taking the treasure for himself when that never came up again? What is Lupin dust?

It just don't add up!

Also, what kind of woman decides to get together with the pirate who's burning down her village? Those pirates probably killed tons of villagers, and Sakura just decides, "Hm, okay, maybe his dick is huge." All he did was extend his hand to her and she was completely moved to join him. Was it out of desperation? Then after he's executed she just kills herself? That whole relationship screams Stockholm Syndrome.

I did like that Fujiko got to have a little adventure almost to herself (though it's surprising that Lupin would just give up so soon). She used her craftiness and persistence, since her usual sexual persuasion method didn't apply here. We even got to see her in action for a few moments when fighting off those thugs, though it was a little too short to be that exciting. She reacted uncharacteristically chill when the treasure turned out to be a bust, but she did say that she enjoyed seeing the flowers on the tree bloom.

Not really a lot to say about this one. An okay little adventure. Next time, Mamoru Oshii's second episode, so that'll probably be more compelling. 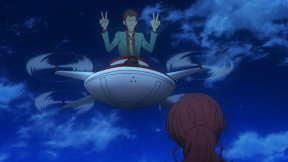 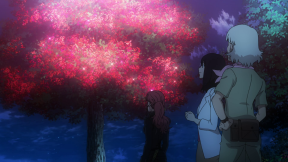