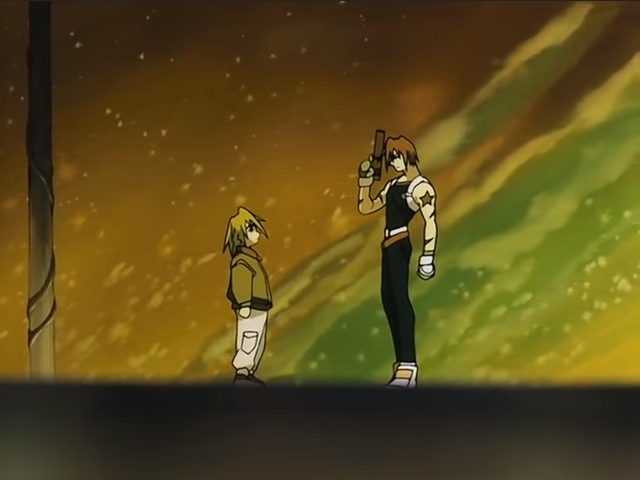 Like the “prep work” episode, this episode seems all too familiar with an end goal rescue. Everybody of importance rushes toward the end, with every surviving enemy getting in the way. Supporting cast tell main guy to go ahead while they stay behind to distract them. Repeat until the protagonist is the only one left and then go ahead to finale.

…Then cut off at the end to save for the final episode.

It’s rote, but Outlaw Star makes it work. All the big revelations will be left for the finale it seems, with most of the run time directed towards very intense fight sequences. This is a very fluid episode than most, hearkening back to the climax of Episode 1 and Episode 15, so we’re bound for some fun. Suzuka and Harry McDougal get the most of it with Harry’s attempt to fell Hazanko and Suzuka’s fight with a familiar Anten Seven member. Aisha and Gene sadly don’t get that kind of sequence, with Aisha’s fight being rather short-lived even if she transformed and Gene mostly wasting his Caster shells on ONE Anten Seven member. Didn’t he have a dozen or so in the previous episode? This said it did make for a fairly grotesque sequence where he turned said member inside out as Caster magic sucked it into the void. So that works well.

I’d say Jim not getting any action sequences is sad… but then again, it’s Jim. What do you expect a kid to do against Tao magic on his own? Doesn’t even get confronted with a revelation of the girl they killed a while back was an Anten Seven. It sounds like I’m disappointed, but I already said it was fine that he didn’t know she died.

What just works is some unexpected revelation about Suzuka’s past and her rationale in joining Gene Starwind. I guess it reveals even if she is an assassin she has her own quarrels with people, and how she feels too. However, it’s too little too late and it has me in a Saitama-esque stare as I respond with an affirming if unimpressed “Okay”.  The better revelation is finally having a chance to see Hilda one more time. When Gene passes out from using his dangerous Caster shells we get her and his dad reminding him of what he desires, what to expect, and what must be expected of him to be an Outlaw. It’s one more nice rallying point for him, with the most important people who kick started his adventure.

Shame we don’t hear much from Ron McDougal on why he killed Gene’s dad, but maybe that’s for next time.

In fact, maybe a lot of things will be for next time. I might actually end it earlier in the week because now I’m impatient.