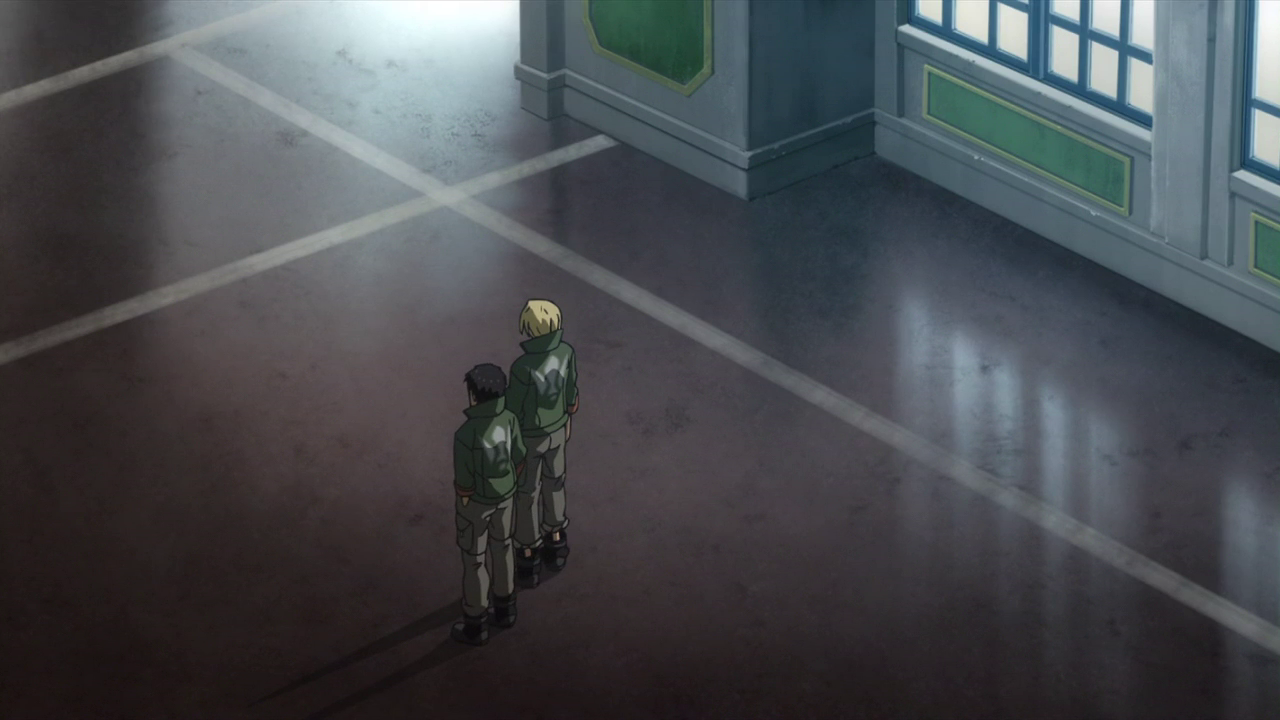 I do believe what we have here is a “failure to communicate” on this week’s episode.  It is not just the distance between Mars and Earth that Tekkadan has to struggle with, it is also the fact they’re still fairly innocent about the world. Oh don’t get me wrong, their lives sucked before they started wearing the big boy pants, yet this impacting line by Takaki defines what I believe will be a prevailing arc this season:

“What will happen if we can’t even trust family?”

There you have it, the crippling flaw of Tekkadan’s closeness. The Teiwaz official, Radice, who has been seen helping Chad maintain the Tekkadan base on Earth the past few episodes, sells them up the river, revealing nothing but contempt for them. This is a detriment to the rest of Tekkadan, as it reveals a very crippling flaw in their family structure: everybody has to defer to Daddy (Orga) in important matters, yet give erryboddy in the family (even those they’ve ‘adopted’) the FULL benefit of the doubt, especially if they’re also the superior in the chain of command. This will not go all too well given this week’s events, where Makanai and Chad are victim to an assassination attempt (clever on the show’s part of bomb in the flower instead of poison in the tea), and then are summarily sidelined offscreen as ‘injured’. Takaki is beside himself as he tries his best to rally and keep everything together but alas, the poor fool can’t. And now, whomever Radice has cut a deal with is now part of Tekkadan’s Earth forces, and may push them much further into a possible war. How this mistrust will spill into and spoil the relationships of the legacy Tekkadan members? I shudder to think how it will happen, never mind the effects of it.

It’s an intriguing style of divide and conquer the Anti-Maccy faction of Gjallarhorn is undertaking. Even Maccy himself is perturbed at the situation, but knows he has to play along and work with what he has been given. It’s a nice twist, especially given his and Orga’s unholy alliance being set in the last episode. All the players in this game are smart in their own way, and instead of biting their thumb and cursing their setbacks keep playing the game and exploiting what they can. Even Orga is wise to this situation, and rushes a shipment of suits to Earth, alongside Mika, to help aid the Earth branch. I expect another exploitation of weakness later on Mars’s end, given the circumstances. If I am not mistaken, this will be the first instance Mika and Orga will be separated from one another for a large chunk of time. How this will affect them or change them as characters I am unsure, but it shows how eager they are to keep things from being dire.

Couple these with Takaki getting prominence in this week’s episode (will it be him or Aston that bite it?) and a segment of the opening taking place next episode, and you’ve grounds for the shit hitting the fan.

All I can say to this is: Bring it.