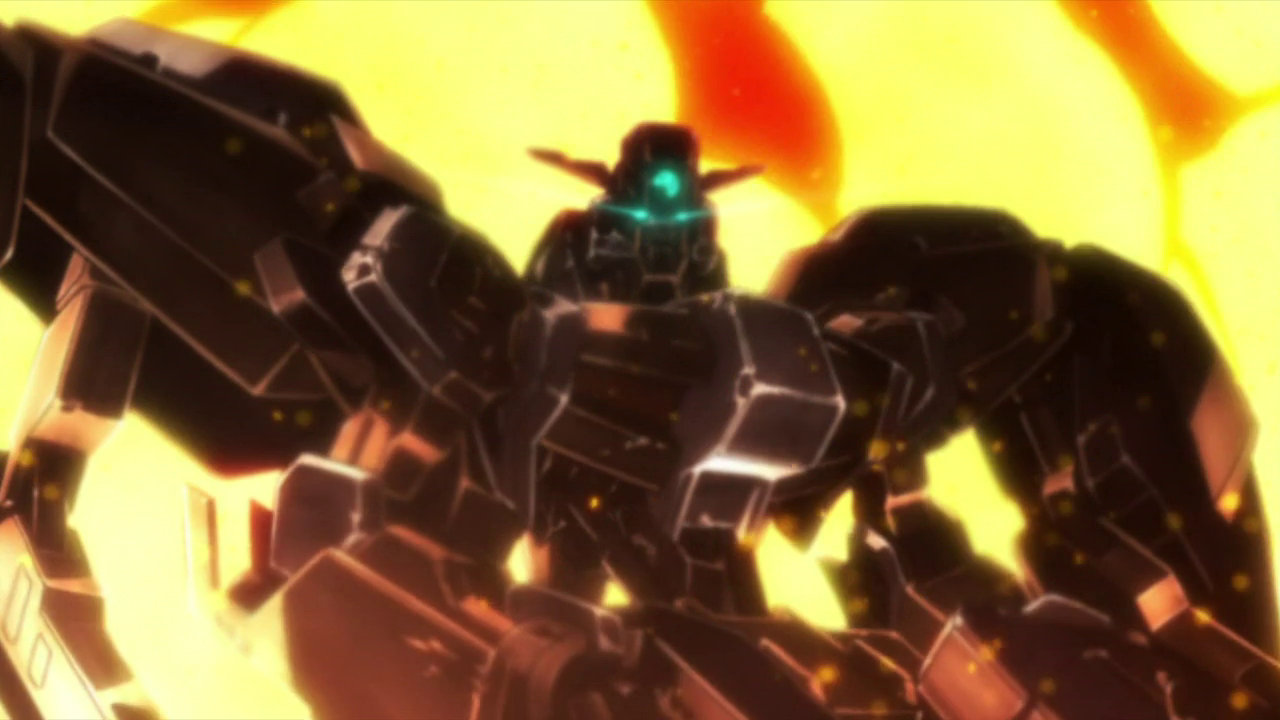 Now this is the kind of balls to the wall action I wanted around the time of episode 3. The intensity and great choreography is there, but more importantly it has the emotional core and tension I thought was missing in the space battle. The initial fight, which had Maccy go up against Takaki and Aston, and be BESTED by both of them is a very good affair, and almost had me think at the time how he would taken down a peg and set back a few spaces by injury, capture, or maybe death.

Alas though, the timely rescue by Mika and the rest of the Tekkadan crew puts the kibosh on those developments. This is fine, as well as their victory over Galan and his mercenaries. Battles where losses are sustained and they only get out of it by the skin of their teeth make for the right kind of excitement and entertainment. After all the foreshadowing in the past few episodes, we now see who dies in this one: Aston. Predictable to be sure (although I was certain Takaki would die too), but his death is handled well. There is a bit of similarity here to how Akihiro tried to save Masahiro after being taking a fatal blow, but it shows how old habits of broken Human Debris die hard even after the first season. All that resentment, all that reconditioning to feel after being told not to for so long, gets to a person. However, Takaki and Aston part on good terms.

Curious though, on how he feels when he realizes both Maccy is also in cahoots with Tekkadan, given he is the one to give Aston the final blow. We do not see Takaki’s reaction to how Mika saves Maccy, and most of his anger falls on Radice, who dies a deserving death. Who knows, but right now he gets a lot of growth in this episode, and given this and protecting his little sister, it will be interesting to see how he develops as a character. Same goes to Hush, who sorties in his first mobile suit battle, and is shaken when he is almost killed; as well as Julieta and Rustal, who show a bit of a human side after they are informed of Galan’s fall in battle (a great one against Akihiro), thus giving them that dimension I always enjoyed seeing in the last season, whether it’s how Maccy and Galli-Galli handled almost running over Cookie and Cracker to one captain lamenting about not being there for his daughter. More please.

Although I am pretty sure we’ll get more given the next episode is a bit of a breather, with Chad and Makanai shown to finally be alive, and everybody looking like they’re planning the next big move. Can’t wait, given how well this episode not just tied up the past few quite well, but ended satisfactorily.